In association with the Conway Hall Ethical Society

The Philosophy Now Festival 2013 took place on 8 September. This page will remain available for reference.

The second Philosophy Now Festival will take place in Conway Hall in Red Lion Square, London on 8 September 2013. The all-day festival will include talks, debates, workshops, and philosophical games for the whole family. 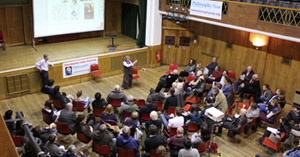 37 philosophy events in one day including:

We are happy to announce that the winner of the 2013 Philosophy Now Award for Contributions in the Fight Against Stupidity is Professor Raymond Tallis.

After receiving the Award, Raymond Tallis will be giving a lecture called “Has Physics Killed Philosophy?”.

The nearest tube station is Holborn (Central and Piccadilly lines).

The doors will open at 10am.

Round tables, debates and panel discussions: