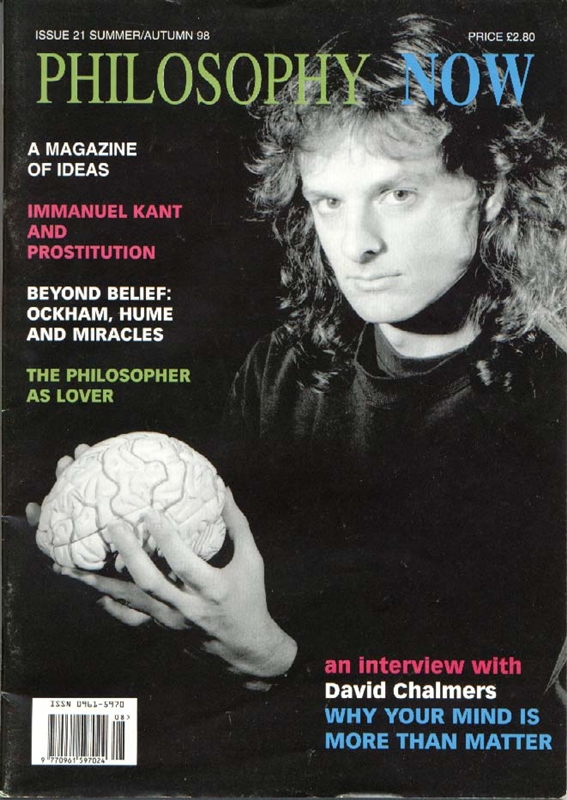 Appeal to the Intellectuals of the World

More news from the philosophy cafés and pubs, compiled by Bryn Williams.

William Grey launches an all-out attack on the paranormal armed with a couple of razors honed with the whetstone of scepticism.

The discarded Lemon: Kant, prostitution and respect for persons

Virtue ethics and the New Testament

Which matter most: virtues or duties? Bob Harrison thinks the early Christians had the answer.

What is natural about Natural Rights?

Do Natural Rights exist? Michael Birshan investigates one of the more persistent political assertions of the modern world in this prize-winning essay.

What’s New in…. Philosophy of Religion

Daniel Hill describes how the work of Alvin Plantinga has revolutionised Philosophy of Religion.

Much Ado About Consciousness

Philosophy of Mind is a very exciting area in modern philosophy. One of those stirring up the dust is David Chalmers, an Australian philosopher who says that consciousness is a fundamental component of the universe, like space, time and mass. Andrew Chrucky asked the questions.

Philosophy Now’s own columnist Peg Tittle asks why we are all so afraid of silence.

The Aesthetics of Music by Roger Scruton

Circe Maia, of Uruguay, is one of the leading literary figures in contemporary Latin America. She is also a teacher of philosophy. These poems were translated by Brian Cole with the support of the author.

A short story about a philosopher during the dark ages by Joanna Motyl.