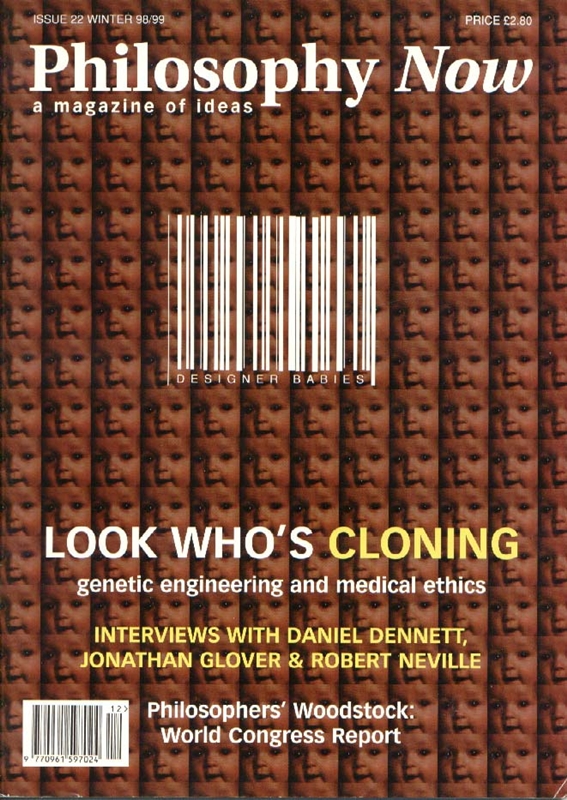 Cleaning out the Chinese Room

Joseph Sen on the uniqueness of philosophy.

More than three centuries after the death of Thomas Hobbes, the issue of state power versus individual rights remains as contentious as ever. Paul Rowlandson on the case for strong government.

Off-The-Peg Offspring in the Genetic Supermarket

Colin Gavaghan asks how seriously we should take Gattaca’s dread of genetic screening.

Anja Steinbauer reporting from the 20th World Congress of Philosophy in Boston.

Anja Steinbauer on an ambitious new attempt to do philosophy in public.

Teaching Validity with a Stanley Thermos

Andrew Chrucky on logical arguments which hold water. And coffee.

Mark Daniels describes the debates, the dilemmas and the philosophers who wrestle with them.

Robert Neville, Dean of the School of Theology at Boston University, was co-organiser of the World Congress. Anja Steinbauer interviewed him about his hopes, fears and crazy dreams for philosophy.

Jonathan Glover is one of the leading figures in medical ethics, but he is also interested in political philosophy. Paul Sheehy interviewed him recently at King’s College London.

How does the brain work? One of the world’s leading figures in philosophy of mind is Daniel Dennett, who describes himself as a cognitive scientist, and who is deeply interested in the development of artificial intelligence. Tim Madigan recently interviewed him for Philosophy Now.

But Is It Science? ed. by Michael Ruse and Science and the Retreat from Reason by Gillott & Kumar

Jerry Goodenough expounds on science and the millenium.

From Wodehouse to Wittgenstein by Anthony Quinton

Antony Flew marks a set of essays by Anthony Quinton.

Hunting Down the Universe by Michael Hawkins

A short story by Stephen Loveless.