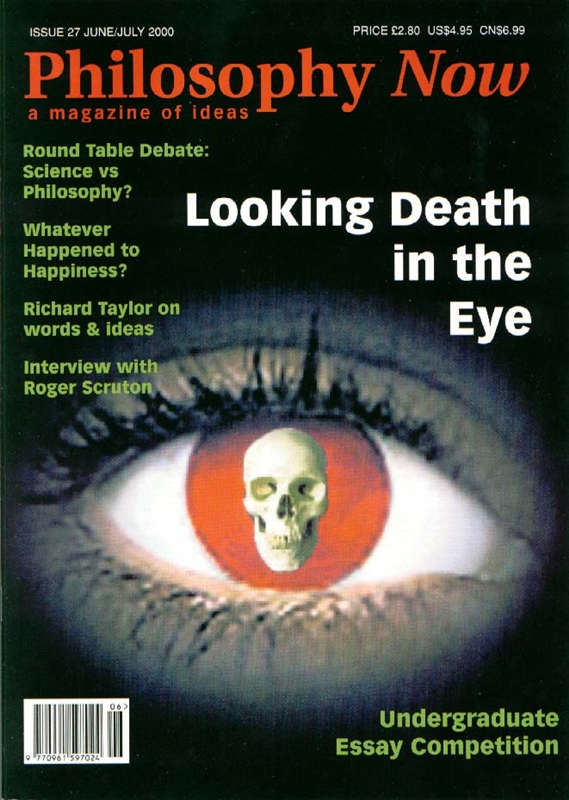 Philosophy & Life: A View from Vietnam

One of Vietnam’s leading academic philosophers Vu Tinh describes the role of philosophy in his country and in the world at large.

Peter Cave discusses the idea that not existing has never hurt anyone.

E.O. Wilson on the Foundations of Ethics

Can gene-culture evolution, rather than philosophy, answer our deepest ethical questions? Torin Alter on moral values and the appliance of science.

Richard Taylor on how language can mislead us.

Whatever Happened to Happiness?

Adam Potkay says there was always much more to happiness than just feelin’ good. He argues that we should once again recognise that the good life is the happy life.

When it Comes to the Crunch

Round Table Debate: Science versus Philosophy?

Given the success of science, do we really need philosophy? Four distinguished scientists and philosophers and about 170 members of the public gathered in a London bookstore to hammer out the issues. This robust and good-humoured Round Table was the second in the series held by Philosophy Now and Philosophy For All to examine how philosophy relates to other ways of seeing the world.

Roger Scruton, the foxhunting philosopher has written a new book on Animal Rights and Wrongs. He talked with Anja Steinbauer about Kant, duties and pet rabbits.

Beyond a Joke? • Paul Wasn’t a Control Freak • Who Cares Whether God Exists? • Nietzsche Rambles

The Truth about Lying

A new column by Joel Marks.

A Philosophy of Mass Art by Noel Carroll

Bob Sharpe considers art for the masses, the topic of a new book by Noel Carroll.

William King ponders a collection of essays which show the diversity of African philosophy.

Ladies and gentlemen… 21st Century Philosophy Now is proud to present the first showing in a new series of philosophical film articles by Thomas Wartenberg. In this installment he looks at American Beauty, Fight Club and Being John Malkovich.

Mark Leech on causality and coffee.