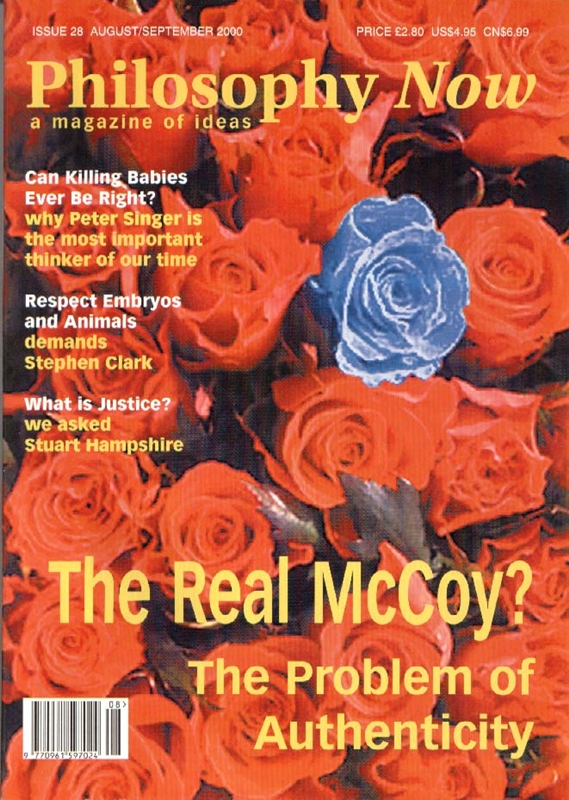 Nobody ever put food on the table by worrying about the notion of authenticity… or did they? Gordon Giles on authentic culinary performance.

What does make a musical performance authentic? What do we mean by authenticity anyway? Michael Graubart looks for some answers.

At the Festival of Philosophy

Over the last 150 years the commanding heights of philosophy have been captured by paid, university-based academics. A feature of this shift has been the growth of conferences – hundreds take place each year, tiny ones and vast ones, some devoted to narrow topics such as the Early Wittgenstein and others covering the whole range of human thought. Opinions are divided about conferences, with some seeing them as a substitute for actually doing philosophy and others regarding them as essential to the exchange of ideas which can spark genuinely creative work. Here we present two very different views of two very different conferences.

Cross-Dressing with Jacques and Judy

Peter Benson ponders the construction and deconstruction of our traditional notions about gender.

Peg Tittle wonders if she can be happy alone without feeling guilty about it.

Stephen Clark on the responsibilities of those who create new kinds of life.

Chris Bloor spends a Summer afternoon wisely with white wine, some friends and a pair of dice.

Survival of the Fittest

Does ‘survival of the fittest’ simply mean ‘survival of those best able to survive’? If so, is the theory of evolution just an empty statement of the obvious? Fred Leavitt unravels a logical challenge to Darwinism.

Ethicist and animal rights advocate Peter Singer has faced public outrage over his views on infanticide and euthanasia. Richard Taylor explains why he regards Singer as the most important thinker of the present generation.

African thinkers are confronting their continent’s vast problems and grappling with the nature of their own intellectual and cultural heritage. Safro Kwame casts a critical eye over the scene and describes the philosophers and their work.

Sir Stuart Hampshire has a new theory of justice based on the inevitability of conflict and on the importance of hearing the other side. Paul Sheehy asked him about his struggles with justice.

Mel-Born • Pleasure and Pain • Mad scientist letter • When It Comes To The Crunch • Read any good books lately?

The Dappled World: A Study of the Boundaries of Science by Nancy Cartwright

Roger Caldwell introduces us to the untidy but realistic world of philosopher of science Nancy Cartwright.

Our new film columnist has discovered an exciting new type of movie: there’s no screen and the parts are played by live actors, in real time. Thomas Wartenberg reports on the play Copenhagen by Michael Frayn.

“I have a philosophical secret!”

The lowest-rated Jerry Springer show ever.

Stuart Hanscomb on fry-ups and Nausea.