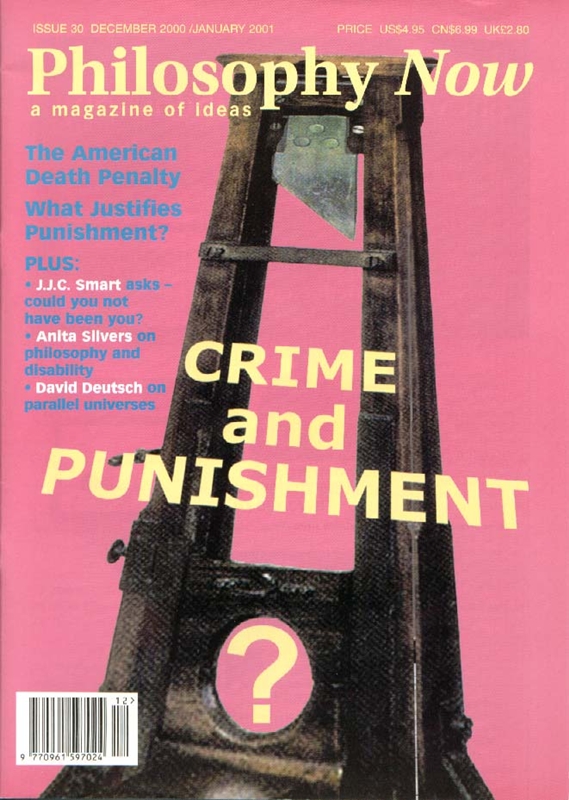 A Matter of Life & Death

Is George W. Bush a serial killer? Terri Murray attacks the death penalty with the help of two prisoners executed by the state – Socrates and Jesus.

The Injustice of Punitive Justice

We take their money, their freedom, sometimes their lives, but opinions differ over exactly what we are trying to achieve, how we should go about it and what justifies it anyway. Jane Forsey on the punishment of criminals.

Leibniz and the Leaves: Beyond Identity

Angels, humans, the leaves on a tree; is each one unique or just an example of its kind? Peter Pesic explains why Leibniz thought even leaves are individuals.

J.J.C. Smart on cricket and counterfactuals.

Neo’s Choice: Truth versus Happiness in Fear and Trembling

Anita Silvers describes a booming area of philosophical enquiry and explains how considering the perspectives of the disabled can help philosophy in general.

The Many Worlds of David Deutsch

Why do some physicists now believe that there are many parallel universes very like our own? And if there are, how will this help us build faster computers?

The Mark of Zombie

These days philosophers of mind talk a lot about zombies, to illustrate ideas about the nature of consciousness. Edward Ingram thinks they are all crazy.

The Sound of Action

In the latest in our series of personal views of philosophy, Lisa Kemmerer describes how thinking changes lives…

David Deutsch is a distinguished quantum physicist and a member of the Centre for Quantum Computation at the Clarendon Laboratory, Oxford University. He has received the Paul Dirac Prize and Medal from the Institute of Physics for ‘outstanding contributions to theoretical physics’. He recently talked with Filiz Peach about his work and hopes.

Truth and Progress by Richard Rorty

Is truth about the way the world is, or is it about what is convenient for society? Les Reid takes a look at a modern pragmatist and asks: Who’s Afraid of Richard Rorty?

In another intrepid exploration of the possibilities of the silver screen, our very own movie maestro Thomas Wartenberg takes notes on an experimental new film called Time Code.

Can the great philosophers of the past help us to answer the questions that really matter to us? A short story by Mark Noonan.