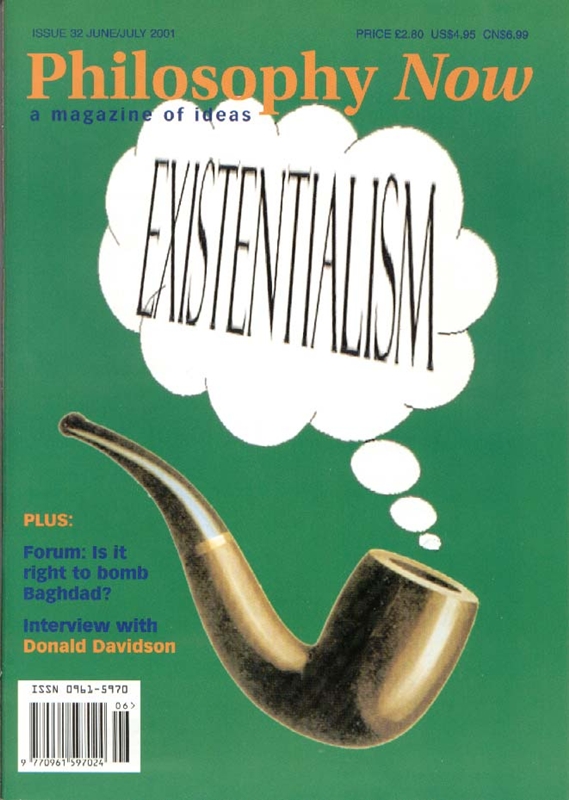 Now We Are Ten!

Jonathan Rée on Søren Kierkegaard and the struggle to become a real thinker.

An introduction to our existential special issue by Anja Steinbauer.

More than any other recent philosophical movement, the existentialists communicated their ideas through plays, novels and short stories. Peter Rickman asks: why did existentialism resort to literary expression?

Richard Oxenberg gives a poetic introduction to Heidegger’s Being and Time.

Understanding the imagination was central to Sartre’s attempts to understand what it is to be human, and how we should live. Maria Antonietta Perna thinks he had important insights which are still worth considering.

Dan Dennett and my Quantum Proposition

Stephen Szanto on trying to combine the views of Roger Penrose and Dan Dennett on consciousness by what he calls his own modest proposition.

Were we designed by an intelligent creator? In our last issue Todd Moody described Intelligent Design theory as a scientific alternative to Darwinian evolution. Here, Massimo Pigliucci takes a more critical view of ‘ID’.

Michael Philips asks whether you have to be lucky in order to be good.

On Having One Too Many

Les Reid on the insights the demon drink can provide into the philosophy of mind.

Donald Davidson’s theories about mind and language have been incredibly influential in shaping modern analytic philosophy. Giancarlo Marchetti recently asked him about his life and his ideas.

Hans Saner is both an original thinker and a link to the great days of existentialism. Filiz Peach asked him about his relationship with Karl Jaspers, and about the future of philosophy.

On 16th February, it was widely reported that American and British planes had bombed a suburb of Baghdad, causing a number of civilian deaths. In our last issue we invited readers to say what they thought about the incident.

The Right Way to Make a Left Turn

Logic and its Limits by Patrick Shaw

Towards the Definition of Philosophy by Martin Heidegger

Have you ever wondered whether everyone talks about you behind your back? Whether they are all keeping something from you? John McGuire discusses the Cartesian nightmare that is The Truman Show.

A short story by Michael Wreen, with apologies to Raymond Chandler.