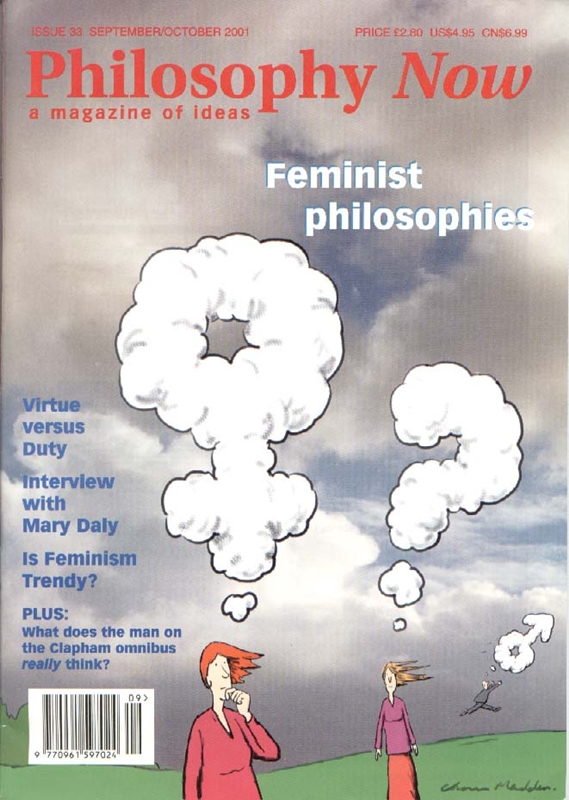 Feminist theory has recently faced accusations of trendiness, but Marianne Janack and Michelle LaRocque leap to its defence.

Jezebel was a much-maligned woman, but Dane Gordon wonders if she really deserved such a bad name.

Some feminists say women should forget old-fashioned ethical rules and focus on developing positive aspects of their characters. Not so, says Sarah Conly.

Therese Dykeman on a case for a Sherlock Holmes and Dorothy Sayers.

Raymond Tallis on the natural philosophy of the caress. It’s gripping stuff!

The Ethics of Tit-for-Tat

Massimo Pigliucci on game theory, rational egoism and the evolution of fairness.

Who is this semi-mythical figure, and what does he really think? Tim Madigan decided that there was only one way to find out…

Mark Cain on the 50th anniversary of Ludwig Wittgenstein’s death.

What’s New in… Philosophy of Language

The 20th century saw the complex relationship between language, mind and world become absolutely central to philosophy. Steven Geisz guides us through the debates, the different positions and the latest thinking.

Dear Socrates: A Symposium on Wisdom

Does Hollywood sometimes get everything back-to-front? A new film called Memento certainly does. Our movie maestro Thomas Wartenberg takes a look.

The Meaning of Life: A tribute to the late Douglas Adams

Did you feel a tiny bit frustrated when Douglas Adams told us in The Hitchhikers’ Guide To the Galaxy that the meaning of life was 42? Tim LeBon did and wondered what interplanetary wanderer Arthur Dent might have concluded if he’d met some real philosophers.