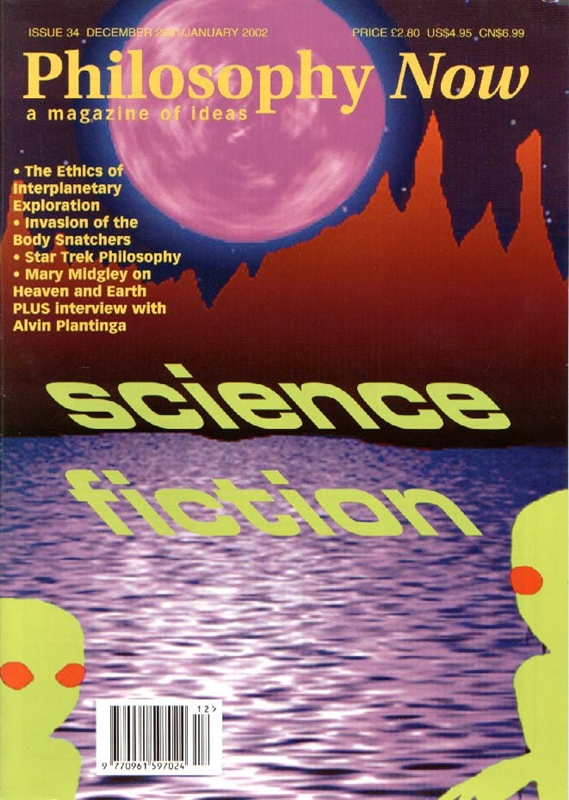 Body Snatchers!: The Invasion of Philosophy

David Suits on the philosophical lessons of a cult classic.

Dan McArthur wonders how we should treat the locals…

Leszek Koczanowicz on a writer whose novels explore the search for meaning within simulated realities.

A Womb of Words

Do babies drink in language with their mothers’ milk? Peter Benson surveys the startling semiotics of Julia Kristeva.

Mary Midgley on our changing views of our own planet, and the story they tell about the changing nature of rationality.

In our second contribution on the problem of induction, John Shand argues that there is no problem, because there is no such thing as an inductive argument.

Last year Laurence Goldstein stepped down from his post as head of the ever-turbulent Philosophy Department at the University of Wales Swansea, following a battery of allegations made by three of his colleagues and a complaint that he had told jokes ‘with sexual overtones’ at a departmental Christmas party. He, and other colleagues who left at the same time, were unwilling to continue working in a department where, for years, brutal hostility has prevailed. On the plus side, however, the experience did inspire him to write this article.

The Problem of Dismissing Induction

The problem of induction, pointed out by David Hume, continues to baffle scientists and philosophers. Theo Clark explains why.

Tim Madigan on September 11th and on a longshoreman who understood the psychology of mass movements.

The World as it is in Itself Revisited

Michael Philips thinks that intelligent aliens could help us sort out the problem of what we can know, by providing a useful new point of view.

Alvin Plantinga is Professor of Philosophy at the University of Notre Dame, and is thought by many to be the most interesting philosopher of religion writing today. Daniel Hill asked him all about his long-awaited new book.

The Ethics of Star Trek by Barad & Robertson

Ken Marsalek is confronted by a bunch of Socratic starship captains in The Ethics of Star Trek.

Wagner and Philosophy by Bryan Magee

What happens when a playwright and a theater director make a movie? Our film critic Thomas Wartenberg recently found out, and it led him to ponder the less obvious differences between films and plays.

A short story by F. Russell Clampitt about what happens when the hot water bottle goes cold.