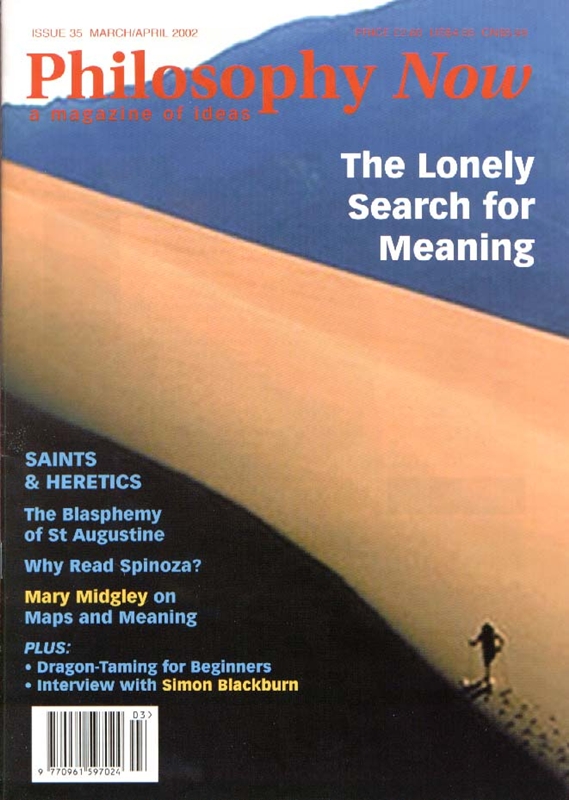 Cutting God in Half

Nicholas Maxwell on the urgent need to dissect the Deity.

Pluralism: The Many Maps Model

Mary Midgley says that branches of knowledge are like maps – each answers a different set of questions so they can’t necessarily all be ‘reduced’ to physics.

Toni Vogel Carey on a misunderstanding between her Aunt Polly and René Descartes.

The Blasphemy of Saint Augustine

James Hale argues that the Holy Spirit is feminine and that the Trinity is a mirror of the nuclear human family.

The Meaning of Life

Daniel Hill argues that without God, life would be meaningless.

Richard Mason on a thinker who stood at the intersection of many histories and traditions.

Can Philosophy Rescue the Art World?

When you cut up a work of art, do you destroy it or create lots of smaller works of art? Michael Philips investigates.

The Uses and Abuses of Philosophical Biographies

Tim Madigan on the Lives of the Great Saints (not!).

After a decade teaching philosophy at the University of North Carolina at Chapel Hill, Simon Blackburn recently returned to Britain, to a professorship at Cambridge University. Filiz Peach caught up with him in London to ask him about his ideas and his priorities.

When the brilliant, tragic Simone Weil died in 1943, she was only 34, but her ideas still inspire. Martin Andic ponders a new biography by Francine du Plessix Gray.

What dark secrets can vampires reveal to us about German Romanticism? Behind the rows of screaming teenagers sits Scott O’Reilly, with a bag of popcorn and the collected works of Friedrich Schelling.

Radio personality Dr Laura Schlessinger is a chat show phenomenon, dispensing advice to the thousands of callers and millions of regular listeners to her show. She recently ran into controversy for her outspoken Biblically-based criticisms of homosexuality. The following open letter to Dr Laura appeared on the internet…

A short story about the Sage of Königsberg by Heather Reyes.