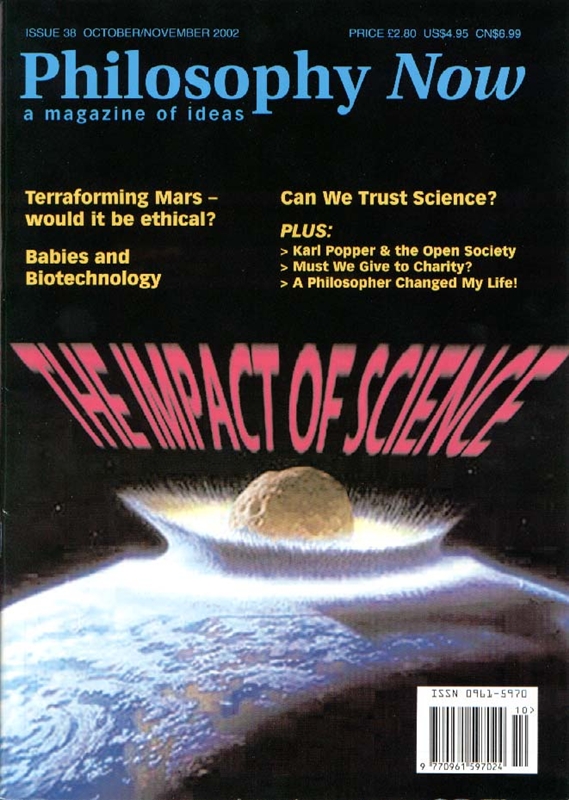 THE IMPACT OF SCIENCE

A Brief History of… Philosophy of Science

Rick Lewis describes what philosophers have thought about science over the last century and a half.

Neill Furr on some of the mistakes people make when thinking about reproduction.

Phillip Hoffmann gives a simple introduction to a complex subject.

The Ethics of Terraforming

Terraforming is the artificial transformation of other planets into places suitable for human habitation. A good thing, surely? Paul York argues that terraforming isn’t as ethically straightforward as you might think.

What’s New in Philosophy of Science?

So what’s going on in philosophy of science at the moment? Bora Dogan describes some of the current highlights.

Alan Haworth on Karl Popper, his vision of a pragmatic, liberal society, and his assessment of its philosophical enemies.

Nancy Bunge was taught philosophy by two of the 20th century’s greatest thinkers, Willard Quine and Paul Tillich. She remembers the profound effect of Tillich’s ideas.

Memoir of a Jolly Junket in Search of Bishop Butler

Joseph Butler was an 18th century clergyman who left an indelible mark on moral philosophy but isn’t as widely remembered today as he deserves. David White scoured England and Ireland for traces of the man they called The Bishop.

Problems of Affluence in Morality

Do we have a duty to give to charity? Kevin Smith weighs up the possible responses to an ethical dilemma we’ve all faced at one time or another.

Paul Kurtz author, philosophy professor and professional skeptic, takes time out of a round-the-world lecture tour to talk to our man in Toronto, Colin Hunter.

Car Seats and the Absurd

The Foundations of Morality by George Frankl

Michael Williams has a problem with George Frankl’s psychoanalytic ethics.

The Road to Perdition

Our philosophical film columnist Thomas Wartenberg ponders the complexity of human motives as he takes in the latest gangster movie, The Road to Perdition.

A short story by R.J. Dent.