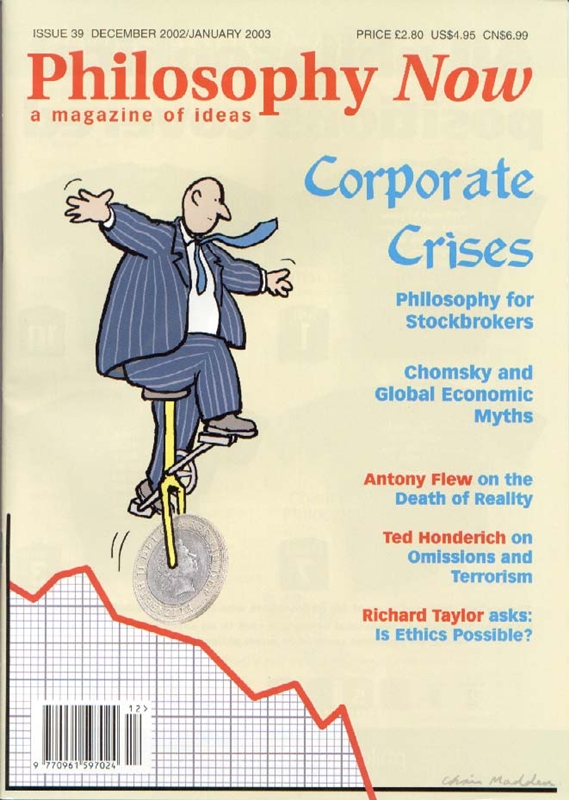 Chomsky on Global Myths and Realities

We live in the era of the global free market. Or do we? And now that the Cold War is over, why are the arms manufacturers still looking so prosperous? Political theorist Noam Chomsky thinks he knows why, as Mike Fuller explains.

Investment Sayings May Mislead You

Stephen Doty says that the accumulated folk wisdom of the investment community should be taken with a large pinch of salt.

Michael Philips on the question of whether computers can think.

Is a Philosophical Ethics Possible?

Richard Taylor explains how ethical reasoning is like travelling up an escalator, and describes the difficulties of choosing between competing systems of ethics.

Reincarnation? Disembodied survival? Resurection? Steve Stewart-Williams ponders the possible ways in which he could survive his own death, and decides that he doesn’t have a ghost of a chance.

Ted Honderich explains why he thinks that we in the West are partly to blame for the terrorist attacks on September 11.

Is there a possible world in which the great philosophers became successful standup comedians instead? No, there isn’t, says Trevor Curnow – and he shows us why…

Rilke thought that the point of poetry was to immortalize that which is transitory. Peter Rickman explains.

Using the F-Word in Philosophy Classes

Ellen Miller on the word which can generate so much instant hostility and misunderstanding.

The Etiquette of Ethics, or Morality as an Affliction: the Feeling Fallacy

Why Blame the Organization? by Raymond Pfeiffer

Lord of the Rings

This film column has been seized by Christian allegorists. Tom Wartenberg has been overthrown! (For now.) Meanwhile, here is Bill Murray’s commentary on Lord of the Rings.

A short story about ethics and the Final Frontier, by Alister Browne.