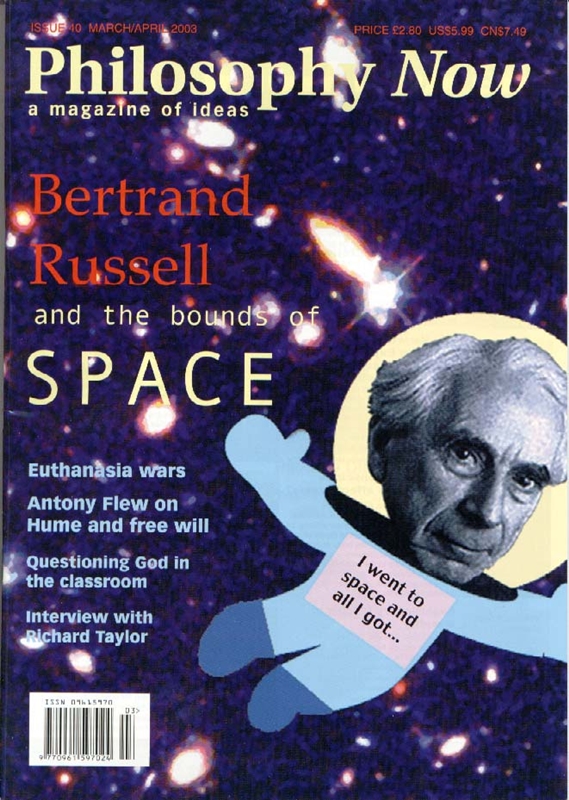 Chad Trainer on the limits of Russell’s views on space exploration.

Antony Flew untangles some confusion about David Hume, St Thomas Aquinas and the fiery fate of the damned.

Mike Alder asks what is wrong with being charmingly illogical.

The Distribution of Power

Tim Chappell explains “Why Euthanasia is in Nobody’s Interest”.

Richard Taylor is Professor Emeritus of Philosophy at the University of Rochester and an internationally renowned ethicist. Tim Madigan tracked him down to discuss Schopenhauer, metaphysics and the intriguing art of beekeeping.

Scapegoating Israel • Falsifying Thoughts on Popper • You Must Be Joking • Focus on Philips • The Nun’s Priest’s Choice • A Philosopher Changed My Life, Too • Life and Death • Kant and Babies • Original Texts Pointless? • Faith and Reality • Home on Mars

The Beauty and Utility of Logic

John Rawls: Towards a Just World Order by Patrick Hayden

The late John Rawls was a giant of political philosophy; Abdelkader Aoudjit peruses Patrick Hayden’s study of his ideas.

On “No Negotiations with Terror”. By Chengde Chen.