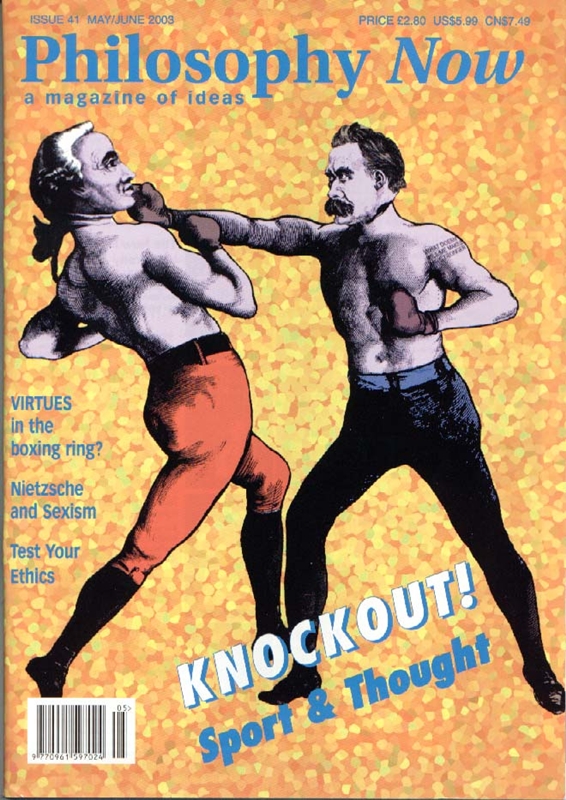 Nietzsche ‘not syphilitic’ • Dolly on Display • Stamboul Welcomes Careful Thinkers • See Zurich and Die • What Do You Get if you Cross a Cow with a Piece of Cheese? — News reports by Sue Roberts in London and Lisa Sangoi in New York

Gordon Marino claims that great virtues can be learned in the ring.

If Life is Finite, Why am I Watching this Damn Game?

Kenneth Shouler discusses the aesthetics of sports and the nature of choices.

Hal Charnofsky argues that in a society obsessed with competition, sport is bad for our souls.

Guest editor Tim Delaney introduces our Sports issue and explains why studying the misdemeanors of athletes can throw light on the problems the rest of us face.

Sports and Drugs (and rock and roll?)

Jessie Burdick wonders whether it is cheating for athletes to take dietary supplements, and we ask you, the reader, to tell us what you think.

Tim Madigan thinks that Immanuel Kant wouldn’t have made a very popular coach, but would have worked wonders for the spirit of fair play.

You’ll Swing For This!

Adam Carter examines the most morally corrupting sport of all.

Stuart Greenstreet isn’t quite sure how long a metre is. Are you?

The Philosopher as Choreographer

Alan Malachowski on readers’ responses to his recent article about philosophical mistakes that lead to boardroom disasters.

Myles Brand has just become President of the National Collegiate Athletic Association (NCAA). Formerly a philosophy professor, his academic research is into the nature of human action. Tim Madigan finds out how sport’s new philosopher-king sees his new job.

Philippa Foot has for decades been one of Oxford’s best-known and most original ethicists. Her groundbreaking papers won her worldwide recognition but at the dawn of the new century she has finally published her first full-length book. Editor Rick Lewis asked her about goodness, vice, plants and Nietzsche.

Assistance in Dying • Earth to Trainer • To Hume Do You Refer? • Terror and Responsibility • What the f___? • On the surface of a crisis • (Un)”Warranted” Misidentification? • God blame them, every one • The Tyranny of Male Logic • Music and the Immortality of Mind • Eating Raw Flesh • Uncertainty and Hospitals

Designer Babies: Where Should We Draw the Line?

Michael Williams gazes inwards and agonizes about the prospects of a proper public debate on such matters as genetic engineering.

Edward Ingram gazes heavenwards and tells us about the Search for Little Green Men.

Stoics on the Big Screen? John Sellars examines the ancient philosophy which surfaces in Gladiator.

Peter Cave eavesdrops on a dialogue between a couple of the billions of little non-persons in Soho, London.