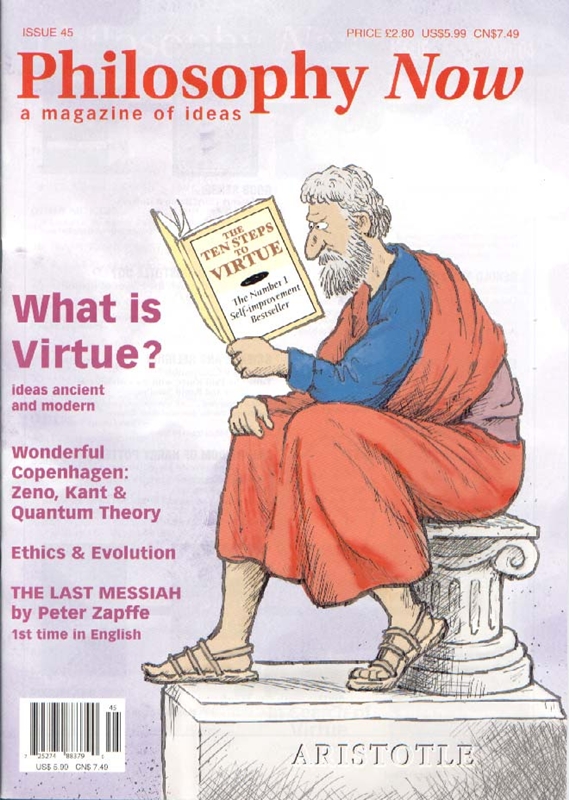 Introducing our section on the nature of virtue, Philip Vassallo describes how the ancient conception of arête arose and developed.

The Virtues of Self-Help

Philip Cafaro asks what virtues are prized today, and why, and finds inspiration in a place few philosophers look.

Would it not be nice if there were a simple foundation to quantum physics? Tony Wagstaff believes there is; and that the Greeks had it.

Steve Stewart-Williams on the implications of evolutionary theory for ethics.

After he fell in love, John Dewey became one of the greatest of American thinkers. Nancy Bunge describes Alice Chipman’s impact on Dewey’s Psychology.

Stephen Doty says we should rephrase certain questions so as not to be bamboozled by language.

The first English version of a classic essay by Peter Wessel Zapffe, originally published in Janus #9, 1933. Translated from the Norwegian by Gisle R. Tangenes.

We’re delighted to announce the birth of a new column by Tim Madigan.

After the Science Wars

Abdelkader Aoudjit reports on which beleaguered positions are still held After the Science Wars.

Jean Chambers explains how Stephen Darwall’s ideas about care connect to an ambitious theory of rationality and ethics.

Our movie maestro Thomas Wartenberg says that Clint Eastwood’s recent film Mystic River is a tragedy – but in the good sense of the word.

On Real and Artificial Flowers

A short story by Mairi Wilson.