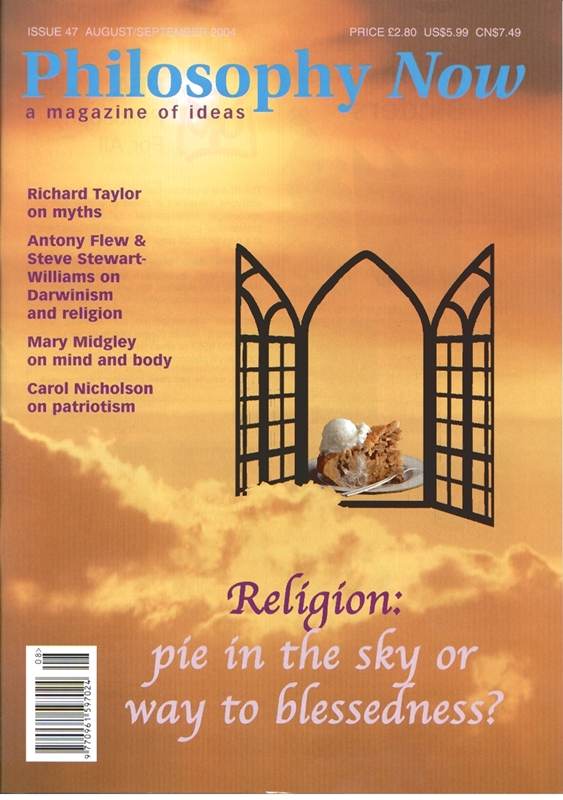 Can An Evolutionist Believe in God?

Are our actions really free or are they determined by God’s will? Imadaldin Al-Jubouri on a controversy that divided Muslim philosophers.

Letter from Antony Flew on Darwinism and Theology

Professor Antony Flew, who is famous for his philosophical arguments in favour of atheism, has contributed these tantalising comments to the debate.

Richard Taylor on the proper role of myths and mysteries.

Are you open-minded? Before you answer, says William Hare, ask yourself the following ten questions...

City, Liverpool John Moore, Swansea, Northampton ... once again university philosophy departments across Britain are closing or under threat. Peter Rickman makes the case for universities that educate as well as train.

Does Sartre’s philosophy give us any clues about how we should live? Yes, says Jonathan Crowe – he showed us that we can’t avoid choosing.

The first installment of a two-part article by Mary Midgley.

The Philosopher King, the Veil & the Mammoth

Jeff Mitchell on the political rise and fall of Luc Ferry.

Carol Nicholson considers the arguments for patriotism offered by conservative and liberal thinkers, and concludes that they don’t work.

The Very First Philosophy Now Crossword For Quite Some Time

The cryptically-named Deiradiotes has set a stiff challenge for all you philosophical crossword fans.

William Rowe is a professor of philosophy at Purdue University. Though an atheist, he spends much of his working life thinking about God. Nick Trakakis recently chatted with him about God and evil and other such theological hot potatoes.

Deliberative Deliberations • Democracy and Terror • Animal Welfare and Pain • Plato and the Heatwave • Philosophy in Peril • Despair, Hope and Pleasure • The Evolving Debate • Zeno and Zero • Virtue and Context

The Geography of Philosophy

Nonbelief and Evil: Two Arguments for the Nonexistence of God by Theodore Drange

James Thomas explores a pragmatic but idealistic book about truth by Nicholas Rescher.

The Meaning of Life

A gripping tale of philosophy, literature and romance by Philip Bellamy.