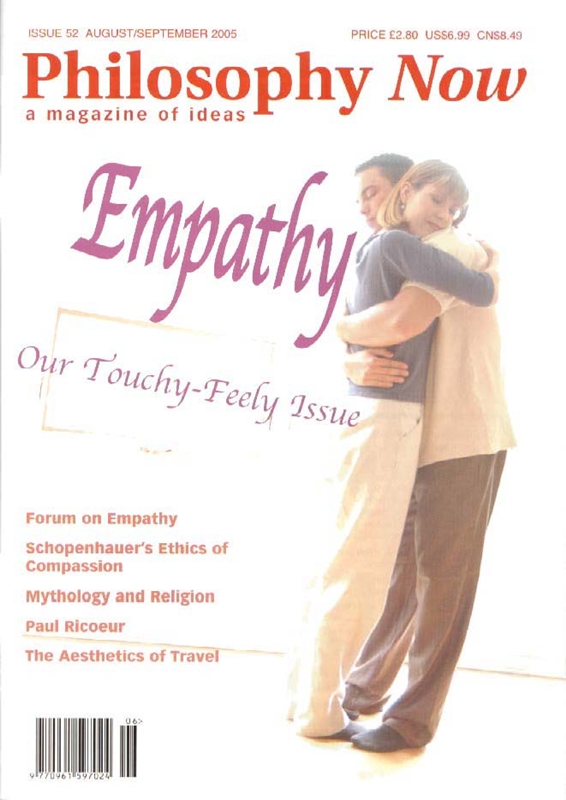 Could advances in technology soon give us perfect knowledge of other minds? Bora Dogan investigates.

Michael Philips argues that the possibility of empathy is incompatible with the idea that the world is physical through and through.

Tim Madigan on the curmudgeon who preached compassion.

The Paradox of Empathy

Ramsey McNabb on knowing how other people feel.

An Aesthetic Justification of Travel

Lindsay Oishi thinks you should travel to celebrate a particular object of art.

Can Mythology Save the Miraculous?

Stephen Anderson argues that religion isn’t simply a system of profound myths – it relies on making factual claims which are really true.

Fred Dallmayr on the conciliatory and original Paul Ricoeur, who died in May.

The Philosophy of John Lennon

What is it like to be a Beatle? Gary Tillery argues that Lennon’s pronouncements, both cynical and idealistic, reveal a sincere and original thinker.

A Practical Role for Philosophy

Peter Bowden argues that it is not a choice between education or training: both are needed, and across every discipline. The problem is that the sciences are providing education as well as training, but that the departments of philosophy are not providing the training.

The sixth philosophical brain-twister from the ever-inspired Deiradiotes.

The Liar Paradox • Unsympathetic Review • Kierkegaardian Waffle • Calling for a Spade • Natural Response • Not the End of Theology • Neuroses and Fallacies • What’s Demeaning of This? • Virtue is its Own Reward • Research Strategies

Blackwell Companion to the Philosophy of Education

John Mann finds his encounter with a Blackwell Companion most educational.

The Oxford Handbook of Aesthetics

Peter Rickman is inspired with beautiful thoughts by the Oxford Handbook of Aesthetics.

The Schopenhauer Cure by Irvin Yalom

Thomas Wartenberg thinks about how real life keeps on breaking through as he watches Bright Leaves.