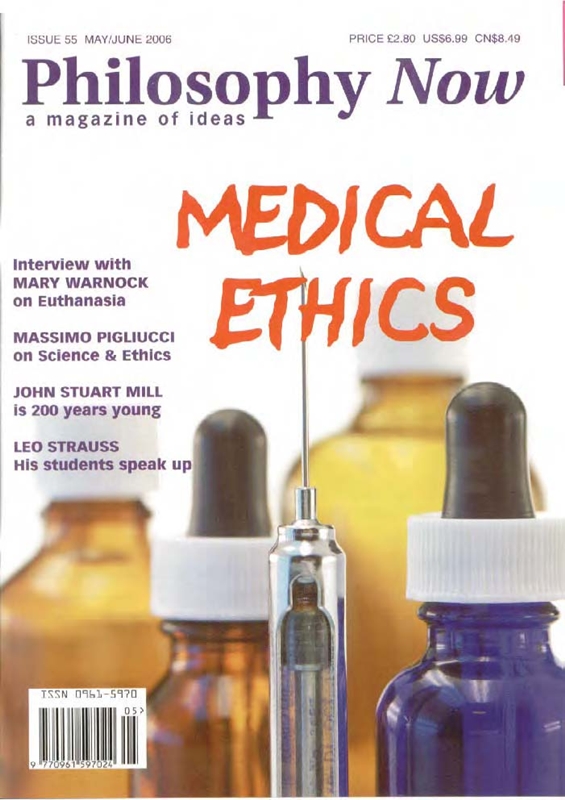 The Stuff of Life

Jeffrey Spike explains the place of medical ethics within bioethics and in relation to philosophy.

Robert Card on the ethics of medical care at the end of life.

Three Guys with Failing Organs vs One Guy with Good Organs

Michael Voytinsky finds another take on a classic utilitarian dilemma.

Xenotransplantation: For and Against

by Ololade Olakanmi and Laura Purdy

Peter Cave of his own free will lists 21 things – and more – that you probably didn’t know about John Stuart Mill.

Katherine Power explores the advantage of having an extended mind.

Our ninth cryptic crossword cleverly composed (as is customary) by the convivially cunning Deiradiotes.

Baroness Mary Warnock is one of Britain’s leading moral philosophers and has also chaired several official commissions of enquiry, including the Committee on Human Fertility and Embryology in the 1980s. She’s currently writing a book in response to Lord Joffe’s Bill, ‘Assisted Dying for the Terminally Ill’. Rick Lewis interviewed her at the House of Lords.

Tim Madigan hopes to not die before he gets old.

After Theory by Terry Eagleton

A short story by Emrys Westacott about drugs, money and bioethics.