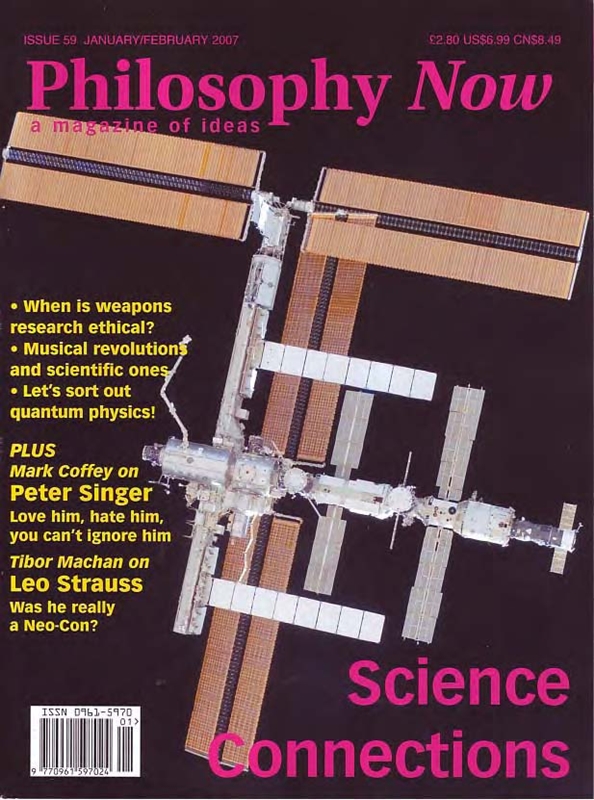 Apply to Mike Alder or any school of physics.

Some say that one of the main differences between science and philosophy is that science makes progress while philosophers go round in circles endlessly discussing the same questions. Toni Vogel Carey isn’t convinced.

No Consolation For Kalashnikov

John Forge considers the moral dilemma of the weapons designer.

Philosophy, Science, And Everything In Between

Massimo Pigliucci at the 2006 Philosophy of Science meeting in Vancouver.

Stephen Doty says the scientist was a philosopher, whether he liked it or not.

The Near Death Experience as Evidence for Life After Death

A dialogue by Stafford Betty.

The Structure of Musical Revolutions

Edward Slowik investigates Kuhn’s philosophy of science through an analogy.

Following on from our Wittgenstein special last issue, Brandon Absher shows how Wittgenstein’s style of therapeutic philosophy can help us be more attentive in our use of language in everyday contexts.

Tibor R. Machan gets to grips with a perplexing thinker.

What Is The Meaning Of Life?

The following answers to this central philosophical question each win a random book. Sorry if your answer doesn’t appear: we received enough to fill twelve pages…

Our thirteenth web of wisdom words wrought with wicked wit and wonder by Deiradiotes.

The Word Is Not Enough • Feed The World? • Courage & Complexity • The Art Of Aesthetics • Argue, Argue, Argue • Existence & Creativity

Grant Bartley finds a lot to think about in Eric Matthews’ ‘brainy’ pondering of mind.

Is Leon a good guy? Mike Parker analyses the character of the eponymous anti-hero through the moral philosophy of Schopenhauer.

John Lanigan fantasises at the cutting edge of philosophical cosmology.