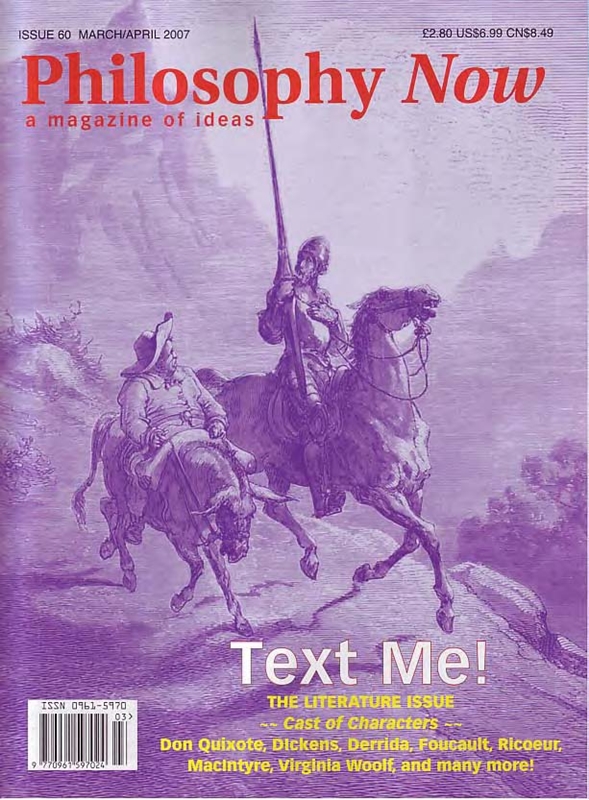 All The World’s A Text?

A Position On Derrida

Nazenin Ruso explains where and why he agrees with Derrida’s approach to texts.

Don Quixote and The Narrative Self

Stefán Snaevarr asks, are our identities created by narratives?

Tony Milligan tells a story about the idea of implied truths in fiction.

What’s in a name? Marnie Binder asks if it matters who’s writing, and other questions of authorship.

Why Emerson is Much Too Smart to be a Philosopher

Nancy Bunge considers Emerson as a philosopher, to show that he is a poet.

Rationalism is the attitude of appealing to reason as the fundamental justification of knowledge or beliefs. Imadaldin Al-Jubouri describes the disputes among early Islamic scholars about the limits of what can be known through science and rationality.

The Trial of Socrates: The Latest

Peter Rickman drops in on the Athenian court, still convening after millennia.

Why You Shouldn’t Be A Person Of Principle

Having returned from the turn of the Fourth Century B.C. to the turn of the Twenty-First A.D., Socrates has eagerly signed on as a Philosophy Now columnist so that he may continue to carry out his divinely-inspired dialogic mission. Aptly, today he answers another letter from a very persistent A. Theist.

The Usefulness of Theory

The Voyage Out by Virginia Woolf

Francis Akpata argues that Shakespeare would be a film director not a playwright in today’s high-media world.

A short story by Stafford Betty. (Warning – not for those of a nervous disposition!)