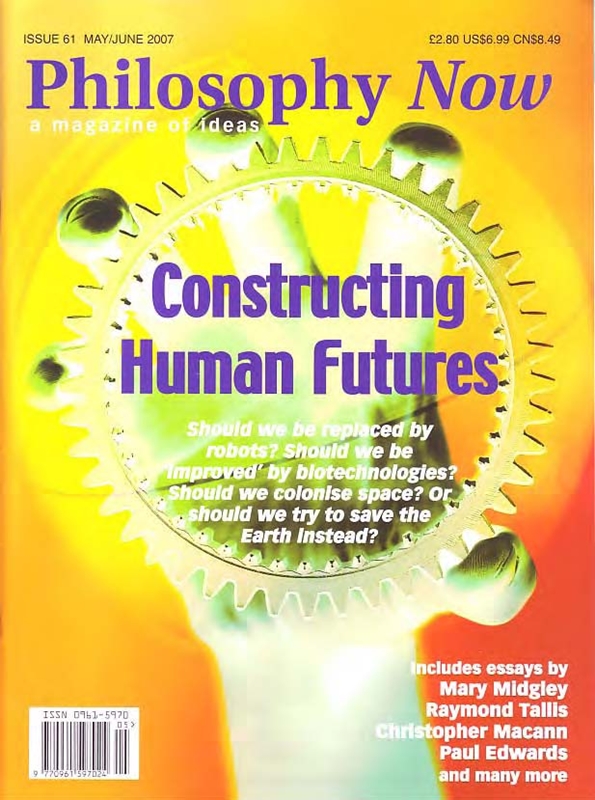 Eric Dietrich looks forward to the extinction of humanity.

Ray Tallis peers into the future, without fear.

Brenda Almond on why the gay adoption debate isn’t really about sexual morality.

Dr E. R. Klein says we should reconsider the value of space exploration and start getting ready to leave the nest.

What Do We Mean By Security?

Mary Midgley argues that Security is not about the size of your military.

Christopher Macann explains the basis of his ‘genetic’ system of phenomenology.

Paul Edwards disagrees with Kant in this recently-discovered paper.

If we think carefully about our decisions, we’ll wind up living better lives, right? Jean Kazez asks this question in response to three recent books about happiness.

Carl Murray sees things from an Other point of view.

The Bits In Between

John Shand reads between the lines.

What Is The Nature Of Reality?

Philippe Le Pers reports after the death of the ‘photographer’ philosopher.

The Kantianism of Hegel and Nietzsche by Robert Zimmerman

Lesley Chamberlain wants to rescue Kant from an interesting book by Robert Zimmerman.

Revisiting the Western convinces Thomas Wartenberg that historical progress is not just a simple question of good heroically triumphing over evil.