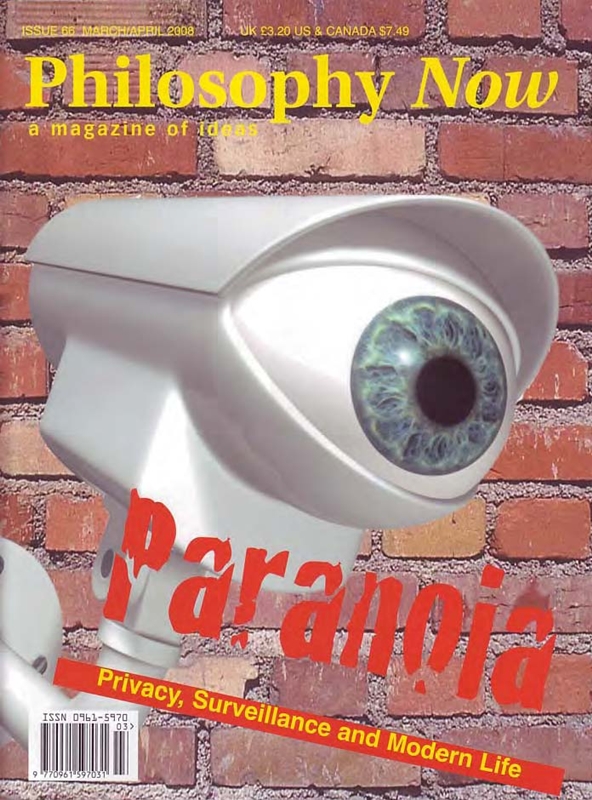 Me, Paranoid? Who told you?

Death of the Author and the web identity crisis

Zachary Colbert spins a story of power and deceit brought to you via your computer.

Jeffrey Gordon rereads a correspondence on war between Einstein and Freud.

Stop Kidding Yourself: Kierkegaard on Self-Deception

Gordon Marino explains how we talk ourselves out of doing the right thing.

John Goff wonders what the real cost of privacy is in the modern world.

Absurdity, God and the sad chimps we are

James DuBois wonders whether meaning can be found in the face of the apparent absurdity of life.

An Argument About Free Will

Luke Pollard and Rebecca Massey-Chase dialogue about freedom vs determinism.

Tibor Machan considers the continuing appeal of the moral philosophy of Ayn Rand, more than fifty years after the publication of her greatest work.

Plato’s astounding legendary lost dialogue is translated with an introductory note by Mark Cyzyk, Master of the College of Antiquities at the University of Vlastos.

Our twentieth tortuous tangle of tendentious texts tautly twisted together by Deiradiotes.

Intelligent Responses • Seeing Red For Green • Resistance is Profitable • Operation Peace • Not Choosing But Drowning • No Philosophy • No Excuse • No Surprise • No History, Please!

Tim Madigan on the philosophers who investigated the Kennedy assassination.

Whose Environment Is It?

Fear Of Knowledge by Paul Boghossian

Steve Wood has no fear of Paul Boghossian.

Freedom and Neurobiology by John Searle

Terry Hand takes an Underground ride into a psychological abyss.