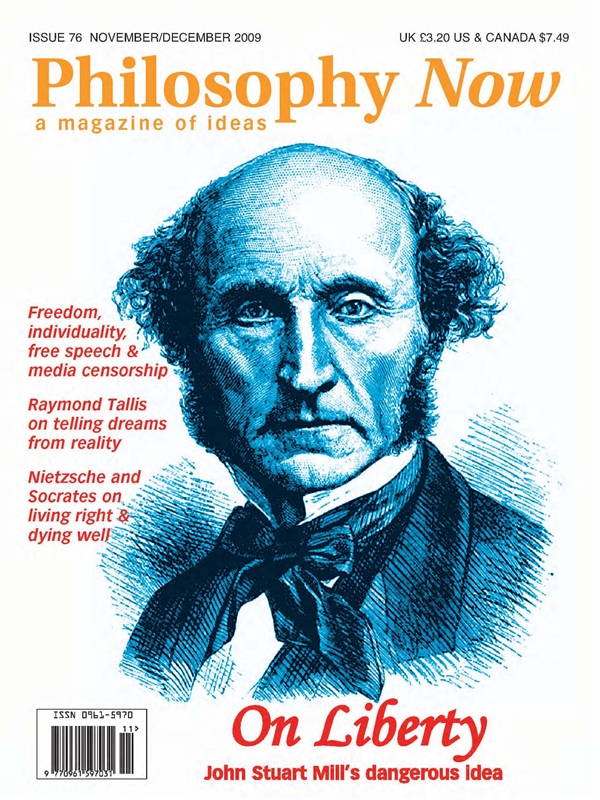 On Liberty: An Introduction

Helen McCabe introduces John Stuart Mill on his own free will.

Delilah and Chris Caldwell talk freely about the freedom of information for Mill.

Erica Stonestreet explores a peculiar aspect of On Liberty.

Dying At The Right Time

Morgan Rempel wonders whether there is a good time to die.

On an evening out Grant Bartley realises the importance of perspective and hears George Soros talk about markets, ignorance and the Open Society.

Mark Vernon thinks about the lives of some philosophers who lived their thinking.

How Are We Free?

Our thirtieth original odyssey of orthographical oddities organised by Deiradiotes.

Yes Virginia, There is a Santayana

Zhuangzi And That Bloody Butterfly

Raymond Tallis dreams up a flight of philosophical fancy.

Will Robins gets sporty with Colin McGinn.

And now for something different again, Bruce: Chris Gill listens to philosophy radio broadcast from the Outback.

Twilight Of The Gods

And now for something completely different: Tim Madigan watches Nietzsche clash with Wagner.

Liz Stillwaggon Swan hears the mice and cats run for the hills, quietly.