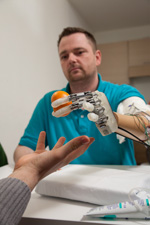 A central philosophical puzzle is how sensory inputs caused by the physical world lead to sensations in the mind. Therefore philosophers may be interested in a recent advance in prosthetics, which for the first time allows users of an artificial hand to feel the texture and shape of objects. Dennis Sørensen, 36, who lost his left hand in a fireworks accident, participated in an experiment in Rome with a new type of bionic hand that hooked up to nerve endings to provide sensory information. Sørensen said: “The sensory feedback was incredible… When I held an object I could feel if it was soft or hard, round or square.” The fingers were controlled by artificial tendons connected via fine wires to sensory nerves in the upper arm. Project leader Silvestro Micera said: “This is the first time in neuroprosthetics that sensory feedback has been restored and used by an amputee in real-time to control an artificial limb.” So he was having sensory experiences with the aid of a ‘hand’ made of metal and plastic. Quick – somebody call a phenomenologist!

Sexism row in US university

Philosophers at the University of Colorado are living through interesting times. In response to complaints, the philosophy department there requested a site visit by the American Philosophical Association’s Committee on the Status of Women. The resulting report said that: “It is our strong conclusion that the department maintains an environment with unacceptable sexual harassment, inappropriate sexualized unprofessional behavior and divisive uncivil behavior.” University officials reacted to the report by replacing the philosophy department chair and suspending graduate admissions into the department. The Daily Camera newspaper in Boulder, Colorado, reported a few weeks later, at the beginning of March, that a philosophy professor was unexpectedly removed from his class by campus police officers, and is now barred from campus while suspended on full pay. It is not known whether this event was linked in any way to the harassment report.

On 2 February, a former Cambridge University philosophy lecturer called Dr Jamie Whyte was elected leader of one of the parties in New Zealand’s coalition government. Whyte starts with an unusual advantage for a party leader: On the day he was elected, an opinion poll registered 0.0% support for his libertarian-inclined ACT Party, meaning that whatever may go wrong, he cannot possibly be accused of damaging his party’s poll rating. Whyte has published a number of papers and books on the subject of Truth, and is a one-time winner of Analysis journal’s prize for the best paper by a philosopher under the age of thirty.

A new website (philjobs.org) was launched last year to help professional philosophers to find academic positions. Co-creators David Chalmers (of philosophy of mind fame) and David Bourget encourage all institutions worldwide with jobs in philosophy to advertise and all jobseekers in philosophy to use this site. The new website is owned jointly by the American Philosophical Association and the PhilPapers Foundation. It complements the long-running Jobs in Philosophy website (jobsinphilosophy.org) which was originally based at Hamburg University. 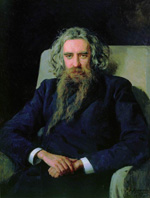 Kremlinologists were granted a glimpse into Vlad ‘The Inscrutable’ Putin’s ideological motivations, when the Washington Post reported that he had ordered Russia’s regional governors to read three weighty books by 19th and 20th century Russian philosophers. The books are The Philosophy of Inequality by Nikolai Berdyaev; Justification of the Good by Vladimir Solovyov and Our Tasks by Ivan Ilyin. Putin has quoted from these three philosophers a number of times in recent speeches. Commentators scrapped over what all this might mean. David Brooks of the New York Times said that the three philosophers shared three central ideas: Russian exceptionalism, devotion to the Orthodox church, and autocracy. He claimed that all three had lurid, grandiose visions of Russia’s mission in the world. Others (such as Damon Linker) claimed this to be an oversimplistic reading.