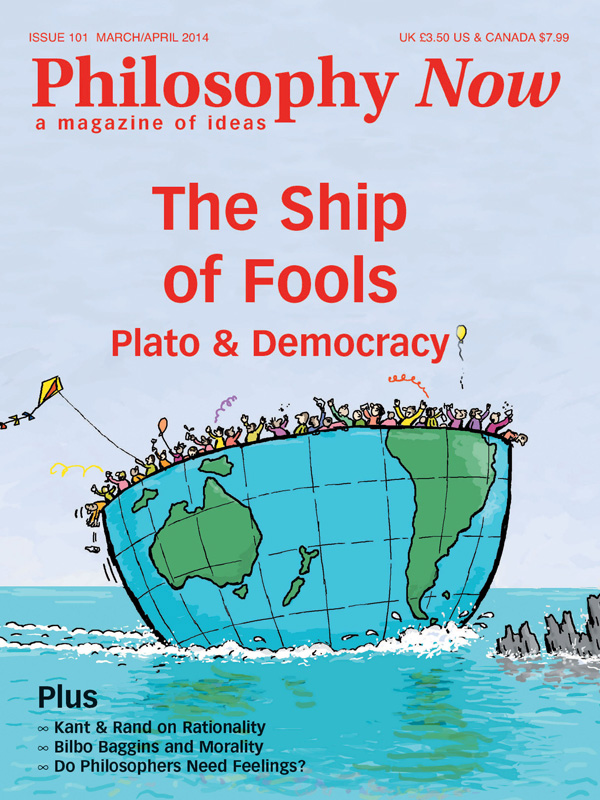 Anja Steinbauer explains why Plato had problems with democracy.

Mark Tan shows us how to overcome our distrust and cynicism towards governments through the appointment of philosopher kings.

Philosophy in the Popular Imagination

Andrew Taggart is philosophical about a widespread misperception of philosophy.

Mikhail Epstein feels that philosophy is not only thinking.

Terri Murray tries to be so.

Dana Andreicut tells us about their philosophical differences and similiarities.

Philosophical Reviews of The Bible

Michael Langford responds to Les Reid’s review of the Bible in Issue 99.

One Will to Rule Them All

Peter Rickman on a poet’s metaphors and the creation of the world.

Gerald Curzon reviews the life and opinions of the original New Atheist.

The following answers to this fundamental question each win a random book.

Critique & Cause • On Unhappiness • Saying Nothing • God Issues • Ought We To Survive? • Seeing Red • Arthur Danto Transfigured

Taking Issue with The God Issue

The Righteous Mind by Jonathan Haidt

Grant Bartley focuses on the forces of history through Philip Glass’s opera about Gandhi.

Mordecai Roshwald imagines what the Athenian gadfly might have said.