Imagine a gym with unisex locker rooms. Imagine a daycare center that your kids can never leave. Imagine a dating service that randomly matches you with a partner (yet the dating service is secretly rigged by the state). Imagine such a world, and you’re imagining yourself in Plato’s republic.

If you’re having trouble taking Plato seriously at this point, you are not alone – his fellow Athenians also thought the social measures he suggested in The Republic were nothing short of ridiculous. With ancient Greek audiences laughing at his unisex gymnasia and rigged matchmaking service, one must ask, why did Plato propose such measures?

Possibility 2: Perhaps Plato wants not to implement a new political system, but to fix the current one, Athenian democracy, which he considers irrational, unjust, and seriously ill.

Plato had good cause to believe Athenian democracy was sick. As demonstrated in Book I of The Republic, Athenian citizens couldn’t conceive of the good city, much less the good life, because they couldn’t agree on a definition of justice and were blinded by opinion and ignorance. The city had become sophistical, valuing slick rhetoric over truth. The city even executed his teacher Socrates. However, Athenian democracy was not beyond hope for Plato. I will argue that he sought not to destroy Athenian democracy, but rather to reform it. Therefore, The Republic should be read not as a practical government plan but as a reform document. So let’s take a look at how Plato’s social measures and concept of the ideal ruler are impractical in real life, but could lead to democratic reform. 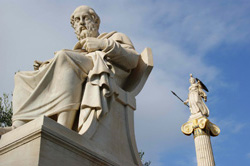 In The Republic (published c.380 BC) Plato proposes social measures that no Athenian would have taken seriously. For example, he suggests that deformed babies should be exposed to the elements. This would amount to a eugenics program that would make democratic Athens resemble protofascistic Sparta. Most Athenians would have recoiled at any association with Sparta, a town they considered beneath them. Plato also suggests marriage by lottery, more or less a random dating service. Only, the marriage lottery will be rigged by the rulers of the city, to breed the best people. No democratic freedom there. Next, Plato proposes a communal rearing pen – basically, a 24/7 daycare center– where kids are raised, and indoctrinated, apart from their biological parents. This would have the effect of disrupting the family unit, the basic foundation of Athenian society. Plato also proposes that some women would be fit to rule the city, because they have the rational nature necessary for ruling, whereas some men would be unfit to rule because they lacked it. The idea that women could be regarded as intellectually equal or superior to men would have shocked any Athenian male and unsettled their long-standing belief that men are superior. In Book V, Plato proposes one of his most laughable measures: a gym where men and women exercise together naked. As Plato writes, “Then the guardian women must strip for physical training, since they’ll wear virtue or excellence instead of clothes” (Republic, 457b, trans. G.M.A. Grube). It would be like having a unisex locker room.

Culturally, no one in Athens could have taken Plato’s proposals seriously. Infanticide, marriage by lottery, unisex naked training – Plato’s proposals sound ridiculous even today. Implementing such measures in Athens would have required a complete restructuring of society, at the very least. Thus, Plato’s social measures are not only ridiculous, they are also impractical.

Why, then, would Plato propose these measures? Perhaps he wanted to spark civic debate about the nature of democratic rule in Athens. His infanticide idea, for example, would have sparked debate about the role one’s basic nature plays in forming a just society, and how to treat the vulnerable. His totalitarian daycare system concept would have challenged traditional beliefs about upbringing. His assertion about female rulers would have led some Athenians to question whether one’s gender determined one’s suitability to rule. Together, such controversial ideas would have caused Athenians to question how effectively their democracy led its citizens toward justice and the good society. Plato’s social measures therefore add shock value to The Republic, potentially sparking civic debate that could lead to democratic reform.

In Book VII of The Republic, Plato puts forth perhaps his most ridiculous proposition: the philosopher king. He believes people can form an ideal city by forming ideal rulers. He believes an ideal city requires wise rulers who have been trained to think philosophically. As he explains, “Until philosophers rule as kings in cities or those who are now called kings and leading men genuinely and adequately philosophize, that is, until political power and philosophy entirely coincide… cities will have no rest from evils… nor, I think, will the human race” (473d). The philosopher king is Plato’s ideal ruler. He might be an Ivy League graduate today. For Plato, he emerges from the elite Greek social class and undergoes physical training and rigorous education in music, mathematics, dialectics and political skills. Plato’s basic logic is “if you fix the souls of the rulers, you fix the city.”

Unfortunately, as a real-life figure, the philosopher king is impractical. For instance, as a ruler he would need to make practical choices that would conflict with ethical or other philosophical ideals. Also, he can emerge only under an exact set of conditions, one of which is a just city state. That’s bad news for Athenian democracy, which was far from just, and even further from producing a just ruler.

But Plato may not have intended the philosopher king to be a real figure. He may have intended the philosopher king as a literary device instead, representing ideals of wisdom, courage, justice and moderation. When viewed as a metaphor, the philosopher king is exactly the sort of figure around which to have a real political debate about democracy and governance. He is wise because he has sound judgment and seeks knowledge as a means to understand the good. He is courageous because he perseveres in hardship. He is just because he acts in accordance with his rational nature. Lastly, he is moderate because he has self-control. As a literary device, the philosopher king would surely have prompted people to discuss how Athenian rulers could become wise, courageous, just and moderate. So Plato’s ideal ruler will fix the city when people read about him and strive to emulate his qualities, and Athens experiences a widespread internal change that will lead to democratic reform.

The very centre of ancient Athenian democracy: the speakers’ platform on the Pnyx.

What Is The Republic?

The Republic is not a practical plan. The text is inconsistent, suggesting that Plato did not seriously intend to implement his social measures. For example, Plato insists that the rulers deceive the people by rigging the marriage lottery (460a); he then states that the rulers must “be without falsehood – they must refuse to accept what is false, hate it, and have a love for the truth” (485c). Another inconsistency is found in this part of the text when Plato extols the sanctity of marriage and then, in the same breath, proposes that marriages should be determined by lottery. He’s also inconsistent when he outlaws promiscuity and yet also suggests that “the best men must have sex with the best women as frequently as possible” (459e). Such inconsistencies suggest that The Republic is not meant to be a practical manifesto for revolution.

At the same time, The Republic is not simply a fantasy. Plato’s literary devices are not constructed for the sake of art alone. Rather, he hopes to spark real debate in Athens that will lead to real social reform. In the middle of his argument, he allegorizes that his fellow citizens are like prisoners in a cave, trapped in darkness and unable to see the light of truth because they are uneducated. Plato intends to educate them, to awaken their souls to a deeper reality, the Form of (the) Good. The Republic is Plato’s attempt to achieve a definition of Justice and the Good that will restore democratic reason. He wants to lead the Athenians out of the cave – in this case of ignorance of what constitutes a just society.

The Republic is a reform document, then. Plato seeks to spark debate that will educate and awaken the souls of Athenian citizens. As they interact with his shocking ideas, they will discuss the nature of a just city, reconsider traditional beliefs, and try to understand the virtues of wisdom, courage, justice and moderation as they apply in politics. They will realize that for justice to prevail in the city, reason must override unconsidered opinions. Such civic debate would lead to a more enlightened democracy and, eventually, reform it.

In The Republic, Plato outlines the ideal city state; now Athens must strive to emulate its virtues. Although he may not intend to implement unisex locker rooms and a rigged dating service, Plato hopes his radical ideas will inspire Athenians to emulate the virtues of the ideal city, thus reforming Athenian democracy. Can its democracy be cured? Can its citizens know true justice? Plato thinks so. Although Plato criticizes democracy, he ultimately seeks to save it.

In the twenty-first century, The Republic continues to engage our critical imaginations. As a reform document, it holds implications not only for ancient Athenian democracy but also for modern global democracy. As we critically read The Republic, we find not a dead political theory, but a living, breathing debate that seeks to bring democracy and its citizens out of the darkness of false ideals and into the light.