Peter Rickman on a poet’s metaphors and the creation of the world.

The poet Rainer Maria Rilke (1875-1926) addresses and refers to God in a great variety of ways, expressed in a multitude of sometimes conflicting metaphors. By relating these to his idea of the role of the poet I hope to throw light on his whole philosophy.

Brought up in a Christian environment, Rilke referred to God and leading biblical figures in a fairly orthodox way. He wrote a volume on the life of Mary, a poem representing the Annunciation and a description of the night in which Jesus doubted. It is different in his Book of Hours. This is not, as books of hours traditionally were, a collection of prayers. Part of it is about poverty, culminating in an eloquent appeal to Francis of Assisi to descend to the poor. Then there is the curious fact that a love poem Rilke originally addressed to his lover Lou Salomé figures here as addressed to God instead. There is also an avalanche of metaphorical references to God; some still picture Him as a person: a peasant with a beard, the heir to whom the poet’s soul offers herself as a woman. Many more do not. 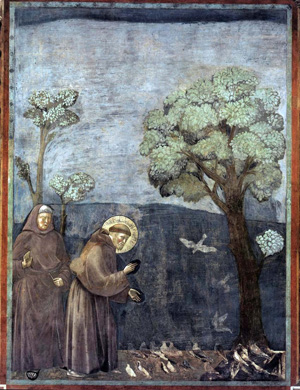 St Francis preaching to the birds

There are passive images: the tower around which birds circle; the forest in which we wander. Others are active: God is the great breaker of walls of a besieged town; He is the turning wheel, the axis about which the poet turns. Particularly challenging to the intellect is the image of God as the cathedral we are building. Obviously He is no longer just a human figure or a trinity.

Interpretation of Rilke’s meaning is difficult and cannot be dogmatic. I personally consider Rilke’s view of the poet’s task a valuable clue. As a poet he did not just sing like a bird, through occasional inspiration, but was thoroughly professional. In his maturity he sat down every morning at his desk to work. In fact he was no good at anything else. He was a poor secretary to Rodin and hopeless working at the War Records Office in Vienna during the Great War.

The poet is on a holy mission for his poems which in Rilke’s own words sanctify and celebrate. In one of his poems he describes God as having lost poetry but says that when he comes to his knees the poems quietly flow back to him.

A fuller explanation of this is provided in Rilke’s great poem the Duino Elegies. Reality requires our articulation of it in language. The empirical world is partly the result of linguistic structuring. The next step in his argument is to show the poet as the creative pioneer of language seeking ever more precise and illuminating expression of our experience.

I can now venture that on my hypothesis Rilke’s God is the spirit of creativity most highly articulated in linguistic creation. This is the forest in which we are wandering, the tower which we are circling, the movement which inspires, the heir to whom we give our devotion, but also the cathedral which we are constructing.

Rilke’s philosophy aims to justify his own experience and aspirations. Life is about creation.

Peter Rickman was formerly head of the philosophy unit at City University in London.

Can An Evolutionist Believe in God?

Augustine’s Choice: The Lord of Light or the Light of the Lord?

What’s New in…. Philosophy of Religion

The Nature of Religious Belief

When Tides of Thought Meet