One of the most prominent American philosophers of the Twentieth Century somehow lost a manuscript he had been working on for years, and soon afterwards, The New York Times dramatically reported the loss. The haze of time has left us with multiple stories of its disappearance. Dewey may have mistakenly left the book in the back seat of a cab, or misplaced it on the sidewalk outside his New York apartment. It may even have been left at his vacation home in Canada. There is no real certainty about how it was lost. But what we do know is that this lost manuscript was recently rediscovered by Phillip Deen in the archives of The Center for Dewey Studies at Southern Illinois University, Carbondale. Deen took on the daunting task of editing the text, and it was published in 2012. This tale of loss and discovery is fascinating in itself, but the book also contains an interesting challenge to the status quo of philosophy in Dewey’s day. It is a challenge I believe still applies today.

John Dewey began working on the book in 1939. The text went through several intermittent evolutions until it was eventually lost in 1947. His working titles for the book can give us some insight into these evolutions. Dewey first entitled it The Philosophical Science. He then named it A Science Became. He finally settled on the unwieldy Unmodern Philosophy and Modern Philosophy. This last title is loosely descriptive of the hypothesis of the book.

Dewey believed that the philosophy of his day was deeply infected with quasi-problems it had inherited from its unmodern beginnings. This infection was most obvious in the growing technicality and hyperspecialization surrounding the theory of knowledge. For Dewey, there was something shockingly out of touch with this focus of interest. In a time when scientific discoveries were changing the world, philosophy was still bogged down with problems that had changed little since the time of Plato. Science was being carried forward by a community of inquirers utilizing an experimental method to examine, and acquire knowledge about, nearly everything. Philosophy was still asking if knowledge was even possible. Worse still, a reliance on outmoded methods had led philosophy into a series of unfruitful binaries such as ‘internal/external’ or ‘mind/body’ that could be traced to its unmodern inheritance.

The rediscovered book has two distinctive parts. The first is a cultural history that describes how certain contemporary (to Dewey) quasi-problems of philosophy developed from ancient and medieval attempts to understand and categorize the world. The second half of the book gives us Dewey’s response to what he sees as this unhealthy mixture of unmodern and modern philosophy.

The core of the argument in the first half of the book is easy to explain, yet difficult to accept. The difficulty arises because Dewey’s argument bumps up against some of our most commonsense judgments about reality.

Dewey begins by saying that ancient culture determined ancient philosophy, and not the other way around. For instance, he believed that the political, economic and intellectual stratification of ancient Greece (into the aristocracy, the military, the merchants, and the slaves), fed into and determined the philosophy of Plato and Aristotle (who were both aristocrats). 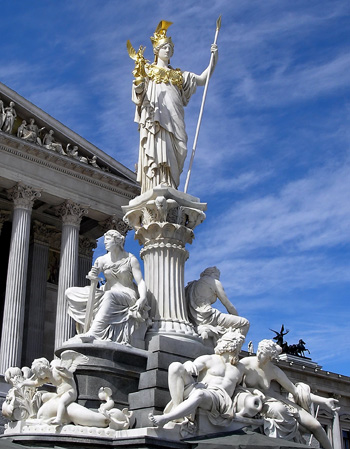 Looking down from the heights of Greek culture

The stratification of ancient Greek culture is not in question. The famous early democracy of Athens was a democracy only for the intellectual and economic elite. Much of the physical labor that supported this democracy was done by those who were not able to participate politically. However, Dewey suggests that Plato and Aristotle first idealized this stratification and then instantiated it in their philosophy – they created a ‘higher’ and ‘lower’ in their philosophy which modeled itself on the ‘higher’ and ‘lower’ of their culture. In this model, the work of the intellect was the unquestioned higher and the practical labor of the body was the lower. Those who used their intellect, and could avoid the messy world of the practical, would remain unsullied: therefore, those who used and valued the intellect could stay closer to the good, which was Plato’s highest ideal. Truth, beauty, and even true reality, were found in this higher realm. The lower realm of mining and farming and building was important to life, but could never lead towards the higher experience. Thus the stratification of their culture produced the framework of Plato’s, and later Aristotle’s, philosophy.

This initial step in Dewey’s argument is not too hard to accept. It seems likely that anyone will be influenced by their culture in their thinking, and that Plato and Aristotle would be no different. It is the next step of Dewey’s argument which may cause difficulty, since it opens up a challenge to some of our culture’s most deeply-held beliefs.

There is nothing wrong with Plato and Aristotle modeling their philosophy on their culture, and in fact Dewey believed it was impossible for them to do otherwise. But a problem arose when the medieval philosophers and theologians adopted the radical split between Plato’s higher and lower without recognizing the cultural cause of the distinction. Then what had been a philosophy inspired by a stratified culture became accepted by medieval thinkers as a vision of reality. They adopted the earlier model where all that was lower was fallen, and all that was higher was divine. Truth, beauty, and reality were to be found not in the fields or mines, but only in heaven. It oversimplifies the argument to say these thinkers turned all that was ‘good’ and ‘higher’ in Plato into a religion, but that is an echo of the truth.

Dewey identifies many unfortunate consequences of this unreflective phase. The philosophy of both Plato and Aristotle that the medieval thinkers accepted, relegated the body to a lower level. More importantly, they relegated the work done by the body to a lower level. The very people who supported and drove the culture and economy were looked down upon. Miners, farmers, and even doctors, were associated with the body. So unfortunately the results of their work were never related to knowledge. Knowledge could only come from the heights of the intellect, never the results of the practical work of the body. In Dewey’s view this was the gravest of errors. It’s not that Dewey did not value intellectual work: he was a philosopher, after all. Rather, he thought it was a profound error to separate the intellectual from the practical and then believe knowledge could only come from the purely intellectual sphere. As he explains, it was the partial reconnection of the intellectual and the practical which led to the scientific revolution of the fifteenth and sixteenth centuries, since it was the reconnection of theory with practical experimentation that drove this revolution. Its massive growth in knowledge did not come from theory alone, but from the combination of theory and experiment. That is, it came from reconnecting the higher and lower. In a startling assertion, Dewey suggests that the scientific revolution was held back twenty centuries by the very early separation of the intellectual and practical by Plato.

Dewey offers many other examples to support his critique. Much of the first half of the book is an attack on canonical Western philosophers and their problems. The mind/body dualism of René Descartes comes under an attack similar to that leveled against Plato. For Dewey it is no coincidence that Descartes’ split is markedly similar to that of Plato, just as it is no coincidence that Descartes still attaches higher value to mind (or soul) as the seat of identity, and relegates the body to the status or a mere machine. So the core assumptions of philosophy never really changed with the times; they only grew more complex. Other philosophers come under a similar critique. John Locke, G.W.F. Hegel, and Immanuel Kant, are all targets for Dewey. Each of them is guilty in some way of being too closely tied to a shared philosophical method which bears little or no resemblance to practical life as it is experienced. Worse yet, it bears no resemblance to the methods of science.

The book is not only a deconstruction of philosophical history. Dewey offered a positive solution to these troubles of philosophy, and it makes his argument as important today as it was in the mid-Twentieth Century. His suggestion was that philosophers should adopt a methodology much like that used by scientists. In itself this suggestion is not as radical as it once was, but Dewey wanted to take things further than most would even today. To head off the most common objection, it is important to note that he did not want philosophers to become scientists. Rather he wanted philosophers to adopt the successful scientific method and adapt it to philosophy. This method would be applied to every area of philosophy, with no exceptions. Politics, economics, aesthetics, and even morality, would be examined through this philosophical/scientific method.

Dewey thought that it was the reconnection of the theoretical and practical which had made science so successful. Following this, philosophy’s method should be an organic mixture of theory and practice. Like science, philosophy should begin in the problems presented by experience, hypothesize solutions, and return to experience to test these solutions; and this process would be repeated as necessary. Just as importantly, philosophy should recognize fallibility at each step of this process, and also disallow supernatural arguments. This reliance on method, on fallibility, and on fully naturalistic argumentation, would help inoculate philosophy from the poisonous methods of its unmodern beginnings.

Michael Brady is a real life pragmatist, currently teaching at Webster University in St Louis, MO, and at Duke University TIP for summer.