The Other Greek Philosophers

Eric Scheske considers the link between Pyrrho of Elis and internet culture.

Everyone knows about the mammoth caverns of information at everyone’s door: hundreds of millions of websites; thousands of must-read new books every year; tons of magazines and newspapers; network television; cable television; AM, FM, digital and satellite radio; entire libraries digitized and online. It’s become so bad that a group at King’s College London studying the effects of ‘informational overload’ concluded that it harms concentration more than marijuana. We call this the ‘Information Age’, but that doesn’t do justice to the endless proliferation of data. It’s better called the ‘Too Much Information Age’. And if the TMI Age had a pagan saint, it might be Pyrrho of Elis (c.360-270 BC). 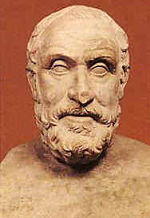 Historians of philosophy refer to this younger contemporary of Aristotle as an early skeptic. Many later skeptics believed that we can’t know anything for certain but Pyrrho was a bit more radical, as he didn’t believe we could even know that for sure either. He was skeptical about skepticism. So Pyrrho was neither dogmatic like Aristotle nor a debating skeptic like the later Carneades. He was rather like the agnostic who stands between believers and atheists, refuting neither but agreeing with neither. Pyrrho didn’t assert that truth is knowable or unknowable: he just shrugged, adopting what the philosopher Eric Voegelin called ‘an existential suspense of judgment’.

What prompted it? It’s impossible to be sure. Consistent with his existential suspension of judgment, he neither wrote nor founded a school or religion. He left few pupils. His words have come down to us in mere fragments. But we do know that he lived in the age of Alexander the Great, whose conquests in the Middle East and Asia brought a rush of new phenomena across the Aegean Sea. Before Alexander, the Greek mind was inquiring and open, but steady and sure: with Alexander’s conquests, new cultures and information flooded the Greek mental landscape, knocking over many shrubs and trees.

Some grew anxious or excited, but not Pyrrho. He had accompanied Alexander on his expedition to India, where he met ‘naked wise men’ (yogis), but when he returned to Greece he chose calm and retreat. Diogenes Laertius tells us that Pyrrho “withdrew from the world and lived in solitude, rarely showing himself even to his relatives.” His disciple Timon wrote that he was “unconceited and unbroken by all the pressures” that attack most people, and that he wasn’t weighed down “with passions and opinion.” Pyrrho had attained ataraxia (a means ‘not’ and taraktos ‘disturbed’) – the ideal state of mind according to Democritus, Epicurus, and Lucretius.

Pyrrho knew the mind’s limits. But it’s interesting that millions of people today are Pyrrho-like in also perceiving the mind’s limits. The mainstream media’s army of reporters, the internet’s hordes of web pages, and the many online libraries have helped many people realize a few fundamental truths about knowledge and information that most didn’t appreciate even just twenty years ago: (1) You will never have all the facts. (2) Whenever you trust a source of information, you are undertaking a leap of faith in the source’s authority. (3) No authority on factual matters is definitive. As a younger man, I once wrote, “The redneck substitutes blanket skepticism for wisdom.” Now that I’m older, I’m beginning to think the redneck ain’t so dumb. In fact, the real wise man understands that he knows very little compared with everything there is to know. I suspect today’s suffocating avalanche of information makes every person a bit wiser in this respect, a bit more like Pyrrho. But is an ‘existential suspense of judgment’ all that Pyrrho has to offer?

The Skeptic Meets the Dogmatist

Toward the end of his life, St Thomas Aquinas (1225-1274) became silent. It was 1273 and he had just returned from Mass. He put aside his unfinished Summa Theologica, right in the middle of his treatment of the Sacrament of Reconciliation, and stopped writing. His friend Reginald asked him why. St Thomas simply said, “I can write no more. All that I have hitherto written seems to me nothing but straw.” Straw? Aquinas? A man consistently ranked in the top ten of history’s best thinkers? What happened?

Nobody knows for sure, but many think he had a mystical experience. The German philosopher Josef Pieper said it was because Thomas had been “allowed a glimpse into the inexpressible depths of that mystery that is not reached by any human thought or speech.” After that, Thomas figured that there was nothing to say.

Sometimes I fancy that the overwhelming glut of information and potential knowledge in the TMI Age gives all of us a dash of St Thomas’s overwhelming experience. What’s the point of trying to capture all or even some of it? I realize it’s ridiculous to compare one’s zombie trance after hours of internet surfing to St Thomas’ mystical calm after Mass; but still, I think there’s something there. St Thomas had also overloaded with Too Much Information, albeit of the divine radiance kind.

Switch back to Pyrrho. To Timon’s question, “Why is it that you alone among men stand forth in the manner of a god?” Pyrrho responded, “For the right rule of truth I have this saying: that the nature of God, as of Good, exists in eternity, and from there proceeds for man the most just and equitable.” God and the Good – not all the assertions and opinions and dogmas and Indian yogis that swirled around Achaean society – that, Voegelin said, was the “enigmatic force that let Pyrrho appear as a saintly, semidivine figure to his contemporaries.” Pyrrho’s silence, like that of St Thomas, was the silence of the mystic.

So do we need to master efficient web surfing or mystic calm? And are those the only options? I’m not willing to say. And you can read into that whatever you want.

Eric Scheske is a freelance writer whose works have appeared in over a dozen publications including National Catholic Register, Touchstone, Detroit Free Press, and Logos.

Plato on a Plate

Yes Virginia, There is a Santayana