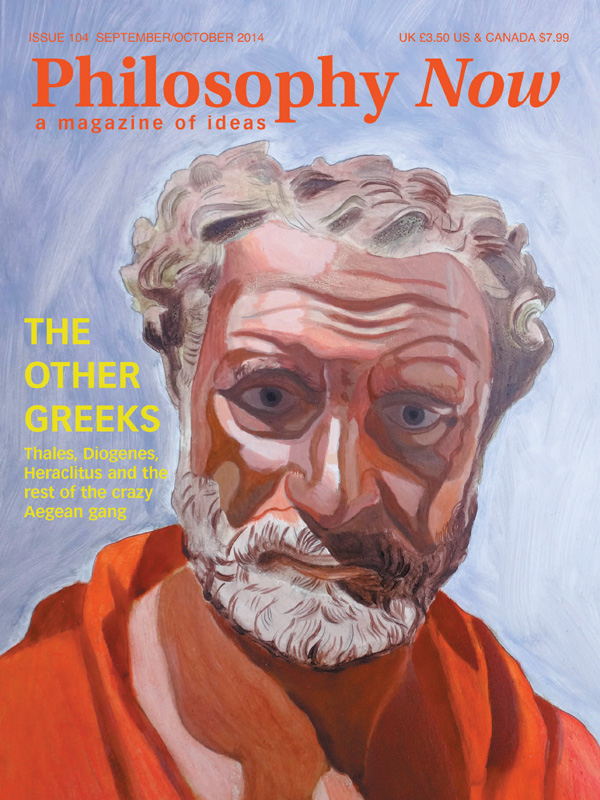 Step Out of My Sunlight!

THE OTHER GREEK PHILOSOPHERS

Chris Christensen argues that two basic philosophical opposites were harmoniously united in the thought of Democritus (460-370 BC).

Eric Scheske considers the link between Pyrrho of Elis and internet culture.

Roger Caldwell contemplates the life and thinking of Diogenes the Dog.

Benjamin Kerstein explores an ancient faultline in Western thinking and modern culture by comparing the philosophies of Epicurus and Job.

Willow Verkerk considers what Nietzsche has to teach us about love.

Bill Capra considers the controversial argument that things have rights.

Phil Badger considers what it would take to make truly justifiable moral decisions.

Jonathan Barfield presents a way to beat the sceptics.

Obscurantism & The Language of Excess

Siobhan Lyons tries not to use either to explain what and why they are.

Matt Qvortrup on the cosmopolitan idealist who became the misunderstood father of German nationalism.

Ideas and Scholarship in Philosophy

Raymond Tallis asks: does it matter who said what?

Philosophy and the Hitchhiker’s Guide to the Galaxy, edited by Nicholas Joll

Massimo Pigliucci finds his way around Philosophy and the Hitchhiker’s Guide to the Galaxy.

Truth By Analysis by Colin McGinn

Reflections on the Death of Celluloid

Frank O’Carroll tells of an athlete who had a run-in with Zeno.