Philosophy and the Hitchhiker’s Guide to the Galaxy, edited by Nicholas Joll

Massimo Pigliucci finds his way around Philosophy and the Hitchhiker’s Guide to the Galaxy.

Years ago I was set to spend a full weekend in my apartment, as it was forecast to snow outside. I decided that I needed some good reading to keep me company. I had heard of something called The Hitchhiker’s Guide to the Galaxy (1979), which was supposed to be clever and funny. It was, and I’ve never traveled without a towel since.

Little did I know that a few years later I would switch career and become a philosopher; a profession that Douglas Adams, the author of The Hitchhiker’s Guide, lampooned mercilessly – recall the panicked philosophers who bitterly complain to the supercomputer Deep Thought that if it figures out the answer to the question of life, the universe and everything, they will be left without a job. And yet, as this volume edited by Nicholas Joll amply demonstrates, there is quite a bit of philosophy interspersed through the Guide – regardless of whether Adams was doing philosophical satire in the sense of satire of philosophy or through philosophy, or, as Alexander Pawlak and Joll note in the excellent last essay of the collection, very likely both.

The idea of the ever-expanding line-up of ‘and Philosophy’ books that use pop culture to introduce people to philosophy is to use television shows, movies, comic books and so on, such as this one, as a vehicle to explore basic (and sometimes not-so-basic) concepts in philosophy. Some of these books turn out better than others. This collection is perhaps one of the best examples to date (although I also truly enjoyed Doctor Who and Philosophy, which I reviewed in Philosophy Now Issue 89). 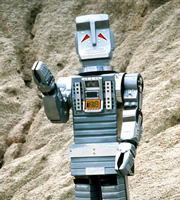 Marvin: “Your plastic pal who’s fun to be with” © Sirius Cybernetics Corp

Philosophy and The Hitchhiker’s Guide to the Galaxy is comprised of nine chapters covering four major areas of philosophy. These are ethics (beginning with the genetically engineered bovine who tries to talk the customers of Milliways, the Restaurant at the End of the Universe, into eating him); the meaning of life (42, what else?); artificial intelligence (who can forget Marvin the paranoid android?); and logic (as you may recall, God himself vanishes in a puff of it right near the beginning of the first book in the series). Let’s consider two examples from this book, the second being my favorite chapter.

Who Is This God Person Anyway?

Timothy Chappell’s contribution is ‘The Wowbagger Case: Immortality and What Makes Life Meaningful’.

Adams took up the issue of immortality in the third Hitchhiker’s book, Life, the Universe and Everything (1982). In it he introduced his readers to Wowbagger the Infinitely Prolonged, an immortal being who is having a hard time coming up with something meaningful to do with his life. Wowbagger, being immortal, has ended up having done everything one can possibly want to do, many times over. His answer is to invent a game. He decides to go around insulting every sentient being in the universe, personally and in alphabetical order. That ought to keep him busy for a while.

However, the question of immortality is philosophically serious – as classically illustrated by the famous essay penned by Bernard Williams in his Problems of the Self (1973) on the play The Makropulos Case. The issue is also timely, given the increasing popularity of the concept of the ‘Singularity’ advanced by techno-optimists (and some techno-pessimists), who seem sure that we will soon be able to upload our minds into a computer, thereby living forever, or at least until someone unplugs us. It is far less clear that they have thought enough about what life inside a computer might be like, and especially whether it would be something worth living. Although Chappell engages with Williams (but, curiously, not with the Singularity crowd) he does so through what I maintain is the modern equivalent of philosophical cheating: by invoking God. Many philosophers would avoid that move nowadays, and for good reasons, varying from the untenability of the existence of God to the exceedingly vague nature of the concept itself, which allows one to deploy God as a general solution to any problem by way of ad hoc assumptions concerning His characteristics. At the conclusion of his argument, Chappell states: “Since I believe that there are inexhaustible goods, and in particular God, I believe this… challenge [of finding meaning in an immortal life] can be met.” But to assume that God exists is an assumption of such gargantuan proportions that even Adams’ definition of space (“Space is big. Really big. You just won’t believe how vastly, hugely mind-bogglingly big it is”) is dwarfed in comparison. 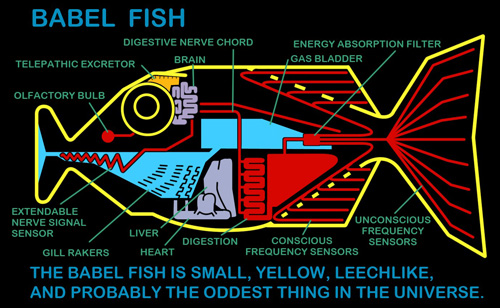 One of the inhabitants of Douglas Adams’ galaxy © BBC 1981

The Meanings of Life, The Universe, and Everything

By contrast, my favorite entry in the collection is Pawlak and Joll’s ‘The Funniest Of All Improbable Worlds – Hitchhiker’s As Philosophical Satire’, in which the authors explore the complex relationship between philosophy and satire, both inside and outside of Adams’ peculiar universe. Perhaps the most valuable contribution of the essay is their table of possible ‘Meanings of the Ultimate Question’, which walks the reader through a related set of four different interpretations of the question of the meaning of life, the universe, and everything.

To begin with, according to Pawlak and Joll, we can ask: what is life’s character? Possibilities include that life is a comedy, or a tragedy, or is an unintelligible farce; or perhaps it’s all about suffering or struggle; or maybe it’s whatever you make of it (I lean strongly toward the latter interpretation). Then we can ask what explains the character of existence; what is the cause of life? Perhaps it is God (see above); or the laws of physics and biology; or some combination of God and natural laws (almost surely it’s the second option). But what explains life being caused in the first place? What is the purpose of life? Maybe such purpose is assigned to us by a higher being; or perhaps there is another purpose that can somehow be found; or perhaps we make it up according to our desires and reflections (you might have guessed that I much prefer the last possibility). Finally, all three questions considered so far feed into the last one: what is life’s import? That is, what should we do with our lives? A panoply of answers can be considered here: don’t bother; live and let live; try to minimize suffering; create beautiful things; make an artwork of your very life; increase your knowledge; achieve oneness with all other beings; or do whatever the heck you want. Being influenced by virtue ethics and the concept of eudaimonia (‘the good life’), I prefer an answer that combines beauty, knowledge and doing right by others. But the point is, a single table in a single chapter of this book will keep you thinking and discussing for many hours on end. That’s surely worth the cover price right there.

So long, and thanks for all the fish.

Massimo Pigliucci is K.D. Irani Professor of Philosophy at the City University of New York, a Fellow of the American Association for the Advancement of Science, and most recently, co-editor with Maarten Boudry of Philosophy of Pseudoscience: Reconsidering the Demarcation Problem. His essays can be found at ScientiaSalon.org.

The Meaning of Life compiled by John Gabay

From Dust to Dust

What Is The Meaning Of Life?