Ideas and Scholarship in Philosophy

Raymond Tallis asks: does it matter who said what?

One of the many privileges of writing this column is receiving a complimentary copy of Philosophy Now. This guarantees a happy evening or two in my favourite pub or café catching up on what my fellow contributors have been thinking about. The Letters section is also often rewarding, even when some of the correspondents suggest that Tallis might be closer to Blunderland than Wonderland. At least the comments make your columnist think again and, sometimes, change his mind.

A little while back there was an especially interesting letter from a writer whose name alas escapes me – an amnesia that is highly relevant in view of my present theme. He asked why it was necessary to attach proper names to philosophical ideas (‘Cartesian’ etc), and why so many articles in the philosophical literature were concerned with who said what. Why don’t we deal directly with the ideas, and forget about who thought of them and how their views differed from those of their predecessors and successors? ‘Let’s get on with the arguments and forget about the scholarship’ was the writer’s essential point (as far as I recall). It got me thinking.

This column aside, my own philosophical writing is heavy with footnotes and references. I have also published a couple of monographs – A Conversation with Martin Heidegger and The Enduring Significance of Parmenides – freighted with the usual scholarly citations. In addition to guiding the reader to further research, citations are an essential courtesy. The ascription of ideas to their originators also pre-empts the suspicion that you are claiming for yourself thoughts that belong to others.

Even so, the letter writer’s view is one with which I have some sympathy. Discussing what Philosopher P once had to say about Topic T and how his or her views were a reaction to, developed, or differed from, those of Philosophers Q, R, S etc., does seem a rather indirect approach to Topic T, and a roundabout way of doing philosophy. What’s more, the literature that can grow up around the question of who said what, and why, can be endless, particularly when the views of a variety of commentators on Philosopher P’s writings on Topic T are then compared, contrasted and judged. So the discussion of The Biggest Ideas – philosophy’s distinctive contribution to the conversation humanity has with itself – can get tied up in secondary questions of attribution and other matters of seemingly inexhaustible interest to academics but not always of any interest to the rest of us. Such scholarship may also offer tempting escape routes from thinking about Topic T, which may be difficult, even painfully so, requiring uncomfortable levels of concentration. One escape route leads to the History of Ideas, which, passing through the History of the Reception of Ideas, can lead to inconclusive arguments over how we should think about the thinkers of the past. Sooner or later, we find ourselves in an Echoland of allusion and quotation. The law of diminishing returns starts to apply, with the philosophical conversation becoming increasingly littered with ‘-ians’, ‘-eans’ and ‘-isms’. The cult of certain thinkers may sometimes get in the way of, or even act as a substitute for, hard thought. The introductory phrase “Wittgenstein said…” is a particularly powerful modern solvent of the critical sense, prompting the assumption that what follows will have deep significance. (In Wittgenstein’s case, this is often, but not inevitably, true.) And there is often a Nietzschean aphorism that can give glamour to one’s belief. Philosophical discourse may degenerate to name-dropping, and the cut and thrust of debate to the cut and paste of citation, with arguments acquiring spurious weight from the names to which they are attached.

The issue gains a particular urgency when we reflect that our lives are of finite duration and the opportunities within that restricted span to engage with philosophical issues such as ‘The Place of the Mind in the Universe’, ‘The Nature of Humanity’ and ‘The Good Life and How to Live It’ are limited. Hours spent reading commentaries on commentaries about what P thought about these topics are hours lost to thinking about them directly, or at least less indirectly. There is therefore a serious question about how much time we should spend thinking about what others have thought about The Biggest Questions instead of just going right ahead and thinking about them for ourselves. Should we even take the trouble to read the classic texts, such as Descartes’ Meditations on First Philosophy or Heidegger’s Being and Time? The answer to this must (of course) be ‘yes’ for several reasons, some less obvious than others.

Firstly, to philosophise in ignorance of what has been already said by those who have thought deeply enough to capture the attention of the world for hundreds, perhaps thousands, of years, is to deprive oneself of an essential assistance for one’s own thought. It may be enjoyably self-flattering to think, like fifteen-year-old Irie in Zadie Smith’s White Teeth, that one is having thoughts that have never been thunk before; but it is an odds-on bet not only that they have been thought before, but they have been thought more deeply, more clearly, and in a more connected way. It is perverse to deny ourselves the shoulders of giants upon which to stand.

Even so, some may still wonder why we should go back to the originals, rather than relying on summaries and digests. Yet there is something very special about eavesdropping on the minds of great philosophers speaking in their own voices, and experiencing the questions and the arguments as they were felt when they were brand new or first seen clearly. However impersonal philosophical prose endeavours to be, the ideas in philosophical classics lose something when they are separated from the tone of voice in which they are expressed, or the tone of self which they reflect. And there is a special benefit – and pleasure – to be obtained from thinking along with writers who are speaking out of a world profoundly different from our own in a style of discourse that is remote from those we are used to. Most importantly, going back to the originals gives us insight into the process of the transformation of The Biggest Questions into specific philosophical problems. All this helps us to see and perhaps challenge the assumptions that frame our own inquiries when we think about our nature and our place in the universe. It may wake us out of a presentism whose most prominent delusion is that the way we see philosophical problems now is the only way to see them.

It would, however, be dishonest for me to pretend that I have read more than a tiny minority of the classics of Western philosophy. In my eagerness to make sure that I have not missed out on too much of ‘the best that has been thought and said’, I have often (to be honest, usually) settled for digests. The truth is that even the most dedicated reader could not have more than a brushing acquaintance with a small proportion of those works which are rightly regarded as key to the evolution of philosophical thought.

So we come back to the secondary literature – and thence to the discussions between X, Y, and Z as to the correct interpretation of what P had to say about T. At first sight, this discussion seems easy to defend. If P is worth reading, then he or she is worth reading correctly. Philosophy is a conversation – ultimately with one’s self, facing the world in solitude – but a conversation nonetheless. But as I have just argued, if it is to be worthwhile, it will nourished by the Great Conversation led by the great thinkers that has taken place over the centuries. They will liberate you from some of your limitations. The entry of third and fourth parties, who have devoted years of painstaking scholarship to elucidating these thinkers, can only enrich the conversation.

That does not, however, quite settle the matter: there is the sheer quantity of secondary literature to consider. What of the literally tens of thousands of volumes of commentary on Aristotle alone; or the hundreds of thousands of academic articles published in contemporary journals by professionals needing to get into print? In recent decades, academic philosophers responding to the expectations of university tenure committees and promotion boards have created an industry in which production is disconnected from consumption – even by fellow professionals, never mind by the general community of Inquirers After Truth. Faced with this Amazon of logorrhoea, we must conclude that what one reads about P can be at best a few grains picked at random from sand-dunes of scholarship on P. Even more worrying, the volume of competition makes it more of a mere accident that one is reading about P rather than Q. 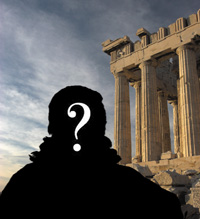 Who is the mysterious philosopher P?

Of all human activities, philosophy is, or should be, closest to the ambition to get one’s head round the universe (and hence around one’s head). Its glory is its absolute, unashamed generality. If our aim is to understand the universe better, it would seem to follow, therefore, that we should not delay too long over what went on in P’s head, which amounts to less than one billion-billion-billionth part of said universe. (I am aware, gentle reader, of the category error at work here, but bear with me.) On the other hand, if we are not to remain stuck at Square One, we need interlocutors in our conversation with ourselves about the world we live in. Those interlocutors are entitled to be read properly – hence the role of commentators, guides, expositors, and the importance of the rigour and punctilio they bring to their task. And yet to the earnest seeker after truth there seem to be ‘things that are important beyond all this fiddle’ with matters of scholarly fact (to appropriate the poet Marianne Moore’s wonderful phrase).

There is a deeper conflict here, and deeper questions about a life in which philosophy is important. At issue is the naïve assumption that our inquiries start from an absolute beginning corresponding to the search for first principles. Any actual philosophising is mired in contingency – shaped by a multitude of accidents that define a narrow cognitive parish in which our philosophical project finds its starting point and which defines what counts as progress towards an end. Even the great thinkers are limited by the accidents of the time and place of their lives. Aristotle died in ignorance of how Plotinus, Descartes, Newton and Frege were to change fundamentally the terms of philosophical debate. In our youth we enter the ongoing polyphonic conversation of philosophy in the midst of things, and we leave the still-ongoing conversation mid-sentence several decades later. We join the philosophical caravan for only a short stretch of an unending journey.

This tension between the aspiration of philosophy towards fundamental eternal truths, and our necessarily local and transient participation reflects our wider limitations. Our life is our forever – it is all we know – and yet it is only a minute part of a world lived in by many millions who came before and will live after us. Endeavouring to transcend ourselves and understand that world, we are often stranded in the Kingdom of the Secondary. Those scholarly footnotes – essential, yet distracting – symbolise a contradiction at the heart of the adventure of thought we call philosophy. So thank you Anon for your provocative letter in Philosophy Now prompting me to re-visit a longstanding argument with myself.