Reflections on the Death of Celluloid

Can films do philosophy? This question has been the subject of a rigorous debate among philosophers of film. Some take it that the answer is obviously “Yes” since a film can certainly be made of a philosopher making an argument, and the resulting film clearly shows philosophy being done. When we see the rotoscoped image of Robert Solomon discussing Sartre’s philosophy in Richard Linklater’s Waking Life (2001), these philosophers would say we are witnessing philosophy being done on film. For the most part, however, participants in this debate think the use of a film as essentially a recording device, as it is in Waking Life, is beside the point. The real question, they maintain, is whether philosophy can be done using the particular technical capabilities of film as an artistic medium. A more refined version of the question at the heart of the film-as-philosophy debate would be the following: Without resorting to the making of verbal arguments, can a film somehow do the sorts of things that philosophers do in their written texts?

Although most of the interest in this question has revolved around the question of whether narrative fiction in film is capable of making creative contributions to philosophy, there has also been some interest in whether avant-garde or experimental films can make such a contribution. Those who affirm this possibility, myself included, have held that such films can make a substantive contribution to the philosophical discussion of, in particular, the nature of film.

The Dying of the Light? 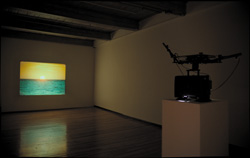 My own thinking about this issue was stimulated by a recent exhibition at the Massachusetts Museum of Contemporary Art (Mass MOCA) in North Adams, MA, entitled Dying of the Light. The title is a self-conscious echoing of Dylan Thomas’s famous poetic exhortation, “Rage, rage, against the dying of the light.” However, here the phrase refers not to the death of Thomas’s father but to the presumed extinction of celluloid as the medium of film. The six artists whose nine works were featured in the exhibition all employ celluloid as the medium for their cinematic works, and many of their works do specifically address the question of what might be lost through the evolution of the medium into a purely digital one. (By the way, two of the artists give the viewer a different understanding of film history than the standard story found in textbooks. Matthew Buckingham’s False Future is about Louis Le Prince’s invention of a film camera prior to anyone else, and Simon Starling’s Black Drop argues that the technology necessary for the invention of the film projector was developed as part of the scientific project to photograph Venus’s transit across the Sun in order to develop a more accurate measurement of the Sun’s distance from the Earth.)

Another work in the exhibition is Tacita Dean’s work, The Green Ray. This 16mm film gives a clear example what would be lost through the death of celluloid The green ray is an optical phenomenon that occurs when the sun sets into the ocean. At the moment the sun disappears, a green ray of light shoots across the horizon. Dean’s short film captures this phenomenon, while two digital recordings of the same event made at the same time do not replicate it. Here is a case in which the use of celluloid as the medium for making and projecting a film shows something that cannot be replicated by means of a digital film, or so Dean contends.

However, the work that captured my philosophical imagination was Rosa Barba’s Stating the Real Sublime. Here a projector is suspended from the ceiling by a long transparent strip of film that weaves up and down through a series of pulleys connected to both the projector and the ceiling. The film itself moves through the running projector, which as a result projects a mostly white light onto the white wall of the gallery. But the image is not completely stationary, for the running projector exerts an uneven force on the suspending film, causing the part of the wall that is illuminated to shift slightly over time. There are also two slight deviations of the image from complete transparency. First, the ends of the film loop are joined by a translucent red piece of what I assume is the splicing tape that creates a continuous loop. Second, the pressure on the tape results in scratches along the edges of the celluloid that are clearly visible to the viewer. In fact, the pressure on the celluloid is so great that the entire loop has to be periodically replaced lest it break, resulting in the projector being smashed on the gallery floor. (Interesting idea there for the final day of the exhibition!) Barba’s piece seems to assert that celluloid, rather than being just a particular medium by means of which films were once created, is the very basis of film. That is the significance I see in the work’s having the projector suspended from the very celluloid strip whose image it projects onto the wall. In good philosophical fashion, we can call this the Celluloid Dependency Thesis (CDT).

Of course, many people, philosophers and filmmakers alike, would deny the CDT. They might say that the transformation of film from a celluloid-based medium into a digital one is not only an historical inevitability, but also just one of many such technological transformations in film’s history. After all, film started out as silent and black-and-white. In its history, many technological changes took place that altered the nature of the medium, such as the introduction of sound and color. “Why should we view the use of digital technology as the means for recording and projecting the cinematic image as any more fundamental a change?” we can imagine such people asking.

As a result of seeing Dean and Barba’s pieces, and those of the other four artists, I found myself pondering that question after leaving the exhibition. I had already learned that celluloid will not be rendered completely obsolete by the spread of digital projection systems in theaters worldwide. Digital films will still be transferred onto celluloid, since it is the safest medium to ensure the preservation of film. But my concern moved beyond that, to the very question of how essential to film was its celluloid basis. 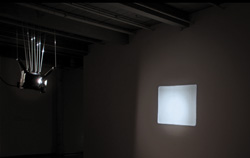 My reflections brought to mind Rudolph Arnheim, one of the influential early theorists of film. Writing shortly after the introduction of synchronous sound, Arnheim claimed that if film was to remain an artform, it would have to avoid the use of the new soundtrack. He argued that a ‘talkie’ was a hybrid of two independent artistic mediums – the moving image and sound – whose tension would never allow sound films to rise to the artistic level of the silent cinema. Looking back with the benefit of hindsight, we can now see how misguided Arnheim’s claim was. Although certain artistic possibilities achievable in the silent film may have been lost when films started talking, we now recognize all the artistic achievements that the introduction of synchronous sound made possible. To decry the talkie as causing the death of cinematic art was, simply put, a theoretical blunder.

I couldn’t help but wonder whether the views embodied in the works of the six film artists exhibited in Dying of the Light would not in time come to be regarded as similarily nostalgic, and mistaken. Of course, there are other artforms where digital technology is no longer simply seen as a boon allowing more accurate transmission of what is recorded. Audiophiles often prefer the softer, warmer sound of vinyl to the cold accuracy of a digitally-rendered disc or mp3 file. But despite my interest in the works of the celluloid artists of Dying of the Light, I remain unconvinced by what I take to be their central philosophical contention.

Nonetheless, seeing the exhibition was a stimulating philosophical experience for me. I do not have to agree with the thesis that animates it to have found it to be an example of how cinematic art can be philosophically significant. After all, we do not have to agree with, for example, Descartes’ skeptical argument that all of our sense experience might be radically mistaken, in order to find it extremely stimulating and a genuine philosophical achievement. Why not say the same for philosophy done on film?

Thomas Wartenberg is the author of Thinking on Screen (Routledge). He teaches philosophy and film studies at Mount Holyoke College in Massachusetts.

Performance Is The Thing

Art As An Encounter

The Launch of Nocturnal Records

Dasein And The Arts

The Hard Case of Duchamp’s Fountain