The Other Greek Philosophers

Chris Christensen argues that two basic philosophical opposites were harmoniously united in the thought of Democritus (460-370 BC).

I’m fascinated by the faultline of dualism that runs through the entire history of philosophy – the dichotomy between the abstract and the concrete. It manifests itself in many ways: metaphysics-physics, mind-matter, idealism-realism, subjective-objective, and so on. The split sharpened in the Seventeenth Century when an intellectual war broke out between the (European) Continental Rationalists, who believed that true knowledge could only be gained through reason, and the British Empiricists, who felt that sense perceptions were necessary to validate knowledge. Judging from what I’ve read, a truce is still not at hand.

To get a grip on this war, I decided to explore dualism in its infancy, in the pre-Socratic period. Two philosophers of the period symbolize the fundamental dichotomy. Parmenides was a budding rationalist who believed the senses are deluded, and built a metaphysics using pure reason. Heraclitus, a nascent empiricist, trusted what he saw and so arrived at the opposite conclusion to Parmenides. However, a third philosopher, Democritus, embodied both views. He saw reason and perception as partners in the quest for knowledge. Democritus represents not a gulf between the two schools, but rather a bridge. (Democritus’ life overlapped with Plato, but historians join him with the pre-Socratics because, like them, he studied the exterior world – unlike Socrates, who turned inward to study human beings.)

I’ll now briefly review the theories of Heraclitus and Parmenides before addressing Democritus’ and the atomists’ attempt at reconciling them. 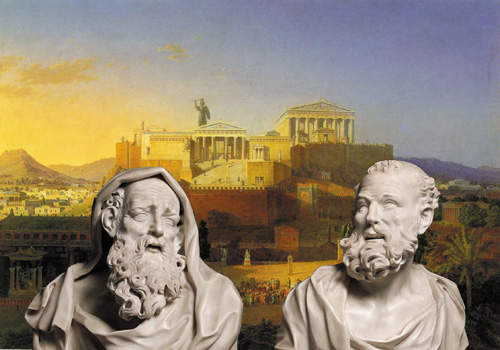 Heraclitus and Democritus disputing metaphysics on the road from Athens

According to Parmenides, sense perceptions are vulnerable to error, if not totally unreliable. Parmenides does not deny that sense perceptions exist – we do see and hear things – but he thinks we can be mistaken about the distinct things we see and hear. Reason rather gives everything unity and denies change. In Parmenides’ words, “The thing that can be thought, and that for the sake of which the thought exists, is the same; for you cannot find thought without something that is as to which it is uttered.” This is a bit slippery for me to grasp, but Bertrand Russell offers some clarity in his discussion on Parmenides: “When you think, you think of something; when you use a name, it must be the name of something. Therefore, both thought and language require objects outside themselves. And since you think of a thing or speak of it at one time and another, whatever can be thought of or spoken of must exist at all times. Consequently, there can be no change, since change consists in things coming into being or ceasing to be” (A History of Western Philosophy, 1945). 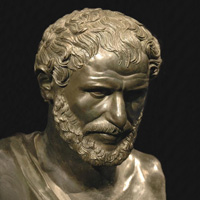 A change in perspective on Heraclitus

Heraclitus, a citizen of Ephesus, now in Turkey, lived around 500 BC. (Whenever I run across Heraclitus in my reading, I am reminded of how ignorant I was. As a member of the U.S. Air Force in the early 1960s, I was stationed in Izmir, Turkey, for almost two years. Ephesus is a short bus ride from Izmir, and is replete with the ruins of antiquity. I now admire Heraclitus, but at the time I was unaware of him. I could have stood where he walked and thought, but not once did I go to Ephesus. We live and sometimes learn.) Heraclitus observed that trees rot and fall; rocks slowly change shape from the constant dripping of water; rivers alter their courses. From this he concluded that everything is in a state of flux, always changing, and so there must be multiple substances, not One. This suggests an empiricist bent; but to understand change, Heraclitus also introduces a metaphysical force that propels the change. He calls it strife, a kind of tension between things, causing them to turn into their opposites. There is also a force which unites things, which he called love. He calls the controlling phenomenon logos – the rational principle than governs nature.

Heraclitus believed that the world is a system that never ends. Things are always becoming, they never arrive at ‘being’. Cosmic motion is the eternal reality. Strife may propel the unending change, but it’s controlled by Reason and the laws of nature.

This is what fascinates me about philosophy: both Heraclitus and Parmenides elevate and use reason to buttress their metaphysical belief, yet they reach opposite conclusions regarding plurality, motion and change. Even more fascinating are the attempts to resolve the contradictions. Democritus and the atomists took on the challenge. They sought to find an answer to Parmenides’ denial of motion and change. 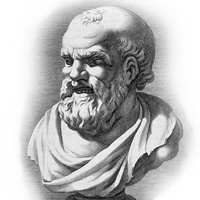 Another side of Democritus

Democritus was a native of Abdera in northeast Greece. He supposedly lived to 90, from 460 to 370 BC. The amazing thing about Democritus is his anticipation of modern science. He promoted the idea that everything is made of atoms, indivisible and indestructible – not unlike Parmenides’ One, except for their plurality and motion. Democritus believes that there are an infinite number of atoms, and they are always in motion – always have been and always will be. The atoms move and collide, and can combine and interlock if they have compatible shapes. Whole worlds can be created through this long process, some with suns and moons. (I would be remiss if failed to stress that Leucippus, the mentor of Democritus, is actually considered the founder of atomism. Historians say it is difficult to disentangle the pair, but Democritus is thought to have greatly elaborated the atomic theory.)

Democritus says that every world has a beginning and an end. This runs somewhat counter to Heraclitus’s idea of things never reaching being but always becoming. Democritus goes further: he says life arose from a primordial soup, consciousness developed gradually, and thought is a kind of motion that may cause motion. To Democritus, both perception and thought are physical processes. He believes that morality, the soul and mental life are made of material and imperceptible atoms. So his atomic world view takes into account emotions and ethics. Think about it: perception and thought are physical – made of atoms. This idea is astounding to me!

Democritus is clearly a materialist, yet his atomic theory is obviously a metaphysical construct, for in his time there was no empirical evidence for atoms. It took over 2,000 years and the development of sophisticated technology, the atomic theory of John Dalton around 1800 and the development of the Periodic Table by Dmitri Mendeleev (1834-1907), to prove their existence. Russell says the atomists were simply lucky with their theory; but I think Democritus came to the theory through a fusion of luck, thought and perception, and in so doing gave the first clue to the blending of empiricism and rationalism. To be sure, he was suspicious of sense perceptions: still, he thought that once the sense data were sifted and examined, conclusions could be drawn regarding their patterns and relationships. So he used inductive reasoning in his thinking. William S. Sahakian’s History of Philosophy (1968) offers support for this. Sahakian says that the atoms of Democritus, while not detected by the senses, are apprehended by the intellect. And, as the imperceptible atoms collide and interlock, they form substances which are manifest to the senses and so subject to empirical investigation.

Leucippus and Democritus were faced with one other great challenge: to resolve the paradox of Parmenides’ denial of motion and change based on his argument for unitary being.

“Parmenides denied the reality of change or motion, because motion implies empty space, an unoccupied area into which an object may enter, but empty space is nothingness, an unreality. In order for a thing to move, it must move into occupied space, and it cannot do that inasmuch as every space is already occupied. Therefore, nothing can move, and since motion does not exist, Being is changeless. Motion and change are mere illusions… These empirical facts of change and motion do not exist in reality; only the facts prescribed by rational thought exist. Hence the empirical world is nonexistent.”

To the modern mind this seems absolutely incredible, and indeed, it sparked incredulity among the ancients. Aristotle saw the problem: “Although these opinions appear to follow logically in a dialectical discussion, yet to believe them seems next door to madness, when one considers the facts.”

Russell says the atomists ignored Parmenides’ problem by saying that motion was too obvious to deny. However, in a footnote, Russell also cites the views of two other scholars. Cyril Bailey maintained that the atomists did have an answer. “It consisted,” writes Russell, paraphrasing Bailey, “essentially in admitting the existence of something (the void) which was not corporeal.” John Burnet adds (in his own words): “It is a curious fact that the Atomists, who are commonly regarded as the great materialists of antiquity, were actually the first to say distinctly that a thing might be real without being a body.” (In my opinion Burnet’s statement is meant to be ironic.) Modern physics has proved atomic theory. Moreover, as Russell sums it up: “The modern physicist, while he still believes that matter is in some sense atomic, does not believe in empty space. Where there is not matter, there is still something, notably light-waves.”

For me, none of this confirmation of atomism reduces the stature of Parmenides. He speculated about the world, and without the tools and knowledge later available, attempted to build a theory about it using his reason. That he was far from perfect does not impugn metaphysics. There’s still a boatload of mystery out there beyond the reach of science.

As for seeing a war between empiricism and rationalism, I think it depends on the psychology of the observer. If you have a combative bent, you may see war; if you have a conciliatory slant, you may see common ground. Democritus was of the latter inclination, and it was fundamental to his nature. He was known for his felicity and contentment. He also said that the greatest happiness could be found in the pursuit of knowledge. The path to that knowledge runs through both the senses and the mind.

Chris Christensen is a delivery driver in Portland, Oregon. In addition to studying philosophy, he and his wife Bobbie produce a blog, Red Stitches: Mostly Baseball. She also teaches him algebra.