Thinking for oneself and avoiding any form of hero-worship seems sound advice, and most of my life I have followed it with genuine conviction. But in my quieter years, and closer to the big cliff, where I have found the space and time to live on a sloping ledge, well beyond the realm of grinding necessity, I have discovered a fellow human being with whom I feel great kinship and even a sense of quiet admiration, having none of his outstanding qualities myself.

I am talking about a Greek polymath who had a finger in almost every scientific pie of his day. They called him the pentathlete, due to his mental prowess in so many disciplines. He was a poet, a mathematician, a geographer, a historian, an astronomer, and finally, the director of the most important library of the ancient world, situated in Alexandria on the shores of the Mediterranean Sea in Egypt, west of the Nile Delta. I am talking about Eratosthenes, who was born in North Africa in about 276 BC and who spent most of his adult life in the Greek colony of Alexandria, newly established by the ambitious Macedonian warlord Alexander the Great.

Eratosthenes’ long life is crowded with achievement, but the best known is perhaps his nearly correct calculation of the circumference of the Earth. The pentathlete worked this out without any great technological assistance, or even himself travelling. He solved this puzzle simply by measuring the length of the midday shadow of a pillar on Summer Solstice Day in Alexandria. A merely imagined identical obelisk in Syene (now Aswan), situated almost precisely on the Tropic of Cancer, would have cast no shadow at all at noon on Summer Solstice Day when the sun stood right overhead. Therefore, knowing the length of the shadow in Alexandria and the distance between the two locations (he had a slave measure it by walking it), he then worked out the curvature of the Earth through trigonometry, and from that calculated the Earth’s diameter. His calculation was correct to about 2%.

How did he know that a pillar at Syene would have cast no shadow? Eratosthenes had found an old papyrus in his vast library describing the perennial phenomenon of the Sun being right overhead at midday on Summer Solstice Day at Syene: the writer knew it was directly overhead since it shone deep into a well on nearby Elephant Island such that the water at the bottom powerfully reflected the visiting rays to stunningly illuminate the entire inside of the well’s circular stone walls. Most people would have either forgotten about this or discounted it as as mere curiousity, but Eratosthenes had the presence of mind to link his own observation of shadow lengths in Alexandria at exactly the same time with the content of this ancient scroll. Having a vivid imagination, his mind travelled upwards, well beyond the odd cloud over Alexandria, and with his mental eye he visualised our planet. He dreamt up a beautiful and stunningly simple geometric model by considering our home from a great distance in space; and by measuring a few angles, he arrived at three major conclusions, which changed the world for ever. First, his experiment told him that our home planet was in fact a sphere. Second, that its circumference was approximately 40,000 km, which is close to the actual figure. Third he inspired the world of navigation, suggesting to his contemporaries, but also to the many yet unborn generations that would follow him, that by sailing the okeanos in a westerly direction the sailors would eventually reach home again, now arriving from the east. That idea must have seemed sensational at the time.

Unfortunately, his navigational suggestion was almost forgotten for many centuries. It was certainly not followed up for more than one and a half millennia, until shipbuilding had become far more advanced, and the time had come for such a daring ancient challenge to be taken seriously by the likes of Columbus and Magellan. They knew about Eratosthenes and his famous calculation and with the newly-developed type of maritime vessel, the Iberian Caravela, such a voyage suddenly seemed achievable enough. So they decided to put his ancient and daring prediction to the test.

Here is the reason for my fascination with Eratosthenes: if simple shadow watching in antiquity could lead to such amazing conclusions, and many centuries later even to the discovery of new continents, then we have to marvel at the wonders of simple scientific measuring. We also have to be in awe of the mind of a Greek genius who could distil a brand new worldview that changed everything out of a very simple, almost mundane observation which all of us could potentially have made, but whose importance apparently only he could see.

We might also ask ourselves how the likes of Eratosthenes would have interpreted the world if a permanent cloud cover prevented them from seeing blue skies, the Sun, the Moon, and of course, the stars. In such a world, shadows resulting from heavenly objects would have been unimaginable. Without measurable shadows, and without star observation, would we not have less new knowledge, less scientific advance? Or would the curiosity of Homo sapiens have led us in a very different direction of enquiry? 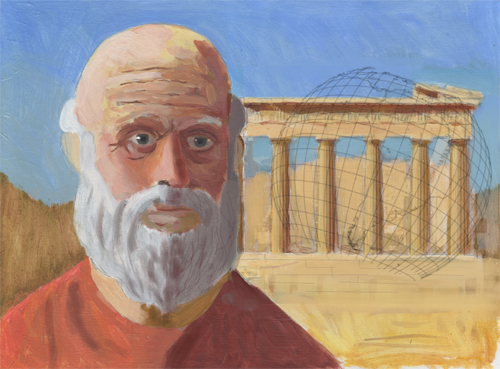 A further thought flows from this question. Our pursuit of scientific knowledge – perhaps starting with Eratosthenes’ humble shadow readings – has taken us to the Moon, to Mars, and well beyond. But we also have to admit that we have not yet progressed very far in other fields of human enquiry. Is it possible that we suffer from some other form of ‘cloud cover’, disallowing ‘shadow readings’ in other disciplines? What type of ‘shadow mark’ are we now incapable of perceiving? What is consciousness? Where does artistic inspiration come from? Why for example do we still not know what happens to us after death? Why are we not certain about the thoughts and intentions of the great watchmaker in the sky? Why do we end up with competing religions? Generally, what sort of ‘cloud cover’ do we need to penetrate in order to arrive at a greater understanding of the human condition, with its many questions that so far defy measurement?

Did the Romans have an inkling of this conundrum when they pronounced Lux umbra Dei est (‘Light is the shadow of God’)? That the truth is a light perhaps too powerful for the human eye and for man’s consciousness? By Eratosthenes’ time Plato had already developed his Allegory of the Cave, in which humans are forced to live in the shifting shadows of a cave, held captive, not being equipped for the bright divine light outside – a luminosity, a truth, that would certainly blind us! And should we include the world of ‘Jungian shadow’ at this point – shadows which we cannot perceive, or prefer not to be aware of, since they are too painful to encounter?

When the great Eratosthenes lost his eyesight at the age of eighty he also seems to have lost his zest for life. Perhaps, in spite of his many brilliant achievements, he yearned for new adventures in unknown realms. So he decided to deliberately move towards the unknown by no longer feeding his human frame, and starving himself into the next world. This was perhaps his final and most daring scientific experiment, expressing his hunger and thirst for light and shadow of a higher order. It is perhaps this last detail of his life that resonates most with me. It highlights the idea of living life to the full and embracing our sojourn here, sometimes under clouds and sometimes under bright blue skies, casting shorter and longer shadows as we move about, encountering truths that we can hardly express in human language because even the shadows are far too bright for us.

Heiner Thiessen is a retired lecturer from Portsmouth University. He worked for FAO/UN in Rome and spent time in African projects.

The Best Doctor is Also a Philosopher

Step Out of My Sunlight!