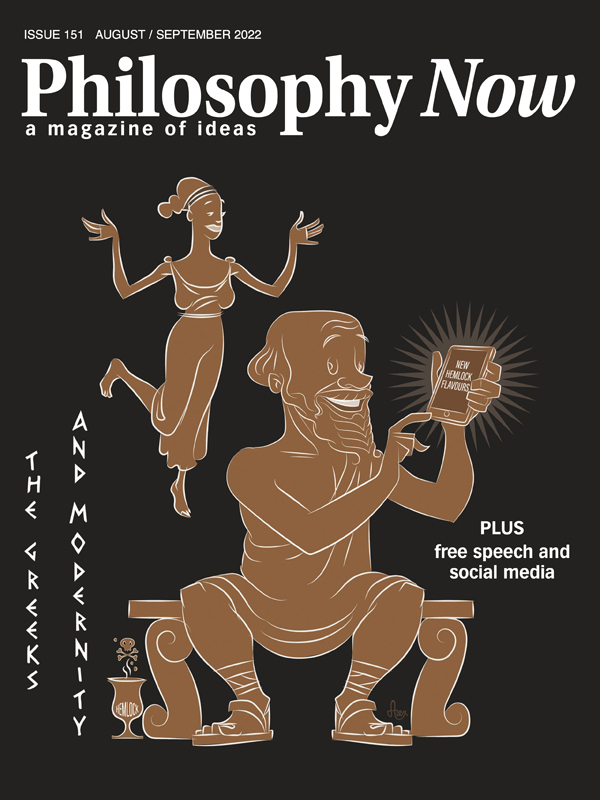 What Have the Greeks Ever Done for Us?

An Ancient Conversation About Motion

Matei Tanasă imagines the sort of conversation about change, motion, appearance and reality that philosophers were having in ancient Athens.

Lawrence Evans contemplates Aristotle’s argument that happiness is the ultimate goal of human life, and that it can best be found in philosophical contemplation.

The Uses and Misuses of Socrates

Dennis Sansom says we shouldn’t be too quick to pluck philosophers out of their own historical contexts in order to put them into ours.

Adam Birt tells us why Levinas wants us to throw off our face coverings.

How To Be Really Good

Robert Griffiths considers what it takes to actually be a mensch.

Nevin Chellappah asks whether John Stuart Mill’s famous account of free speech is still sustainable in the age of Twitter.

Roberta Fischli & Thomas Beschorner argue that our digital future is not preprogrammed: it’s about time we start thinking about what it should look like.

Was Spinoza Actually An Atheist?

Kenneth Novis says the case hinges on how you define ‘God’.

How Do You Change Someone’s Mind?

Timothy Morton is a professor at Rice University in Houston. They have written more than fifteen books, such as Hyperobjects: Philosophy and Ecology after the End of the World; Dark Ecology; Being Ecological, and Ecology without Nature. Thiago Pinho interviews them about experience and reality.

Wittgenstein Out-Played • Gender and Pragmatism • He’s Behind You • For Hume The Bell Tolls? • The Possibility of Progress • The Good & The Not • Matter versus Mind • Stranger Ideas • Meta Letters • To P or To Not P?

How Did We Get To Be So Different?

Raymond Tallis grasps the grip our hands have on our humanity.

The Life Inside by Andy West

Amna Whiston looks at a book on the liberating experience of teaching philosophy in prison.

The Song of Ulysses