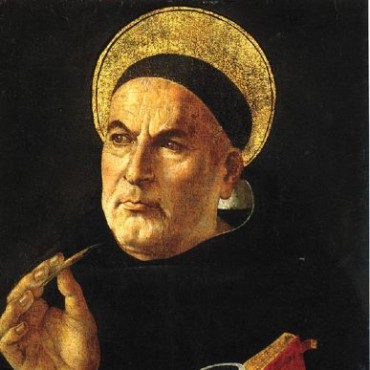 The greatest of mediaeval European sages, the Dominican friar St Thomas Aquinas was known by a variety of titles, such as ‘the Angelic Doctor’, ‘ Doctor Communis’ and ‘ Doctor Universalis’. Curiously, he was also known as the ‘Dumb Ox’ – perhaps some sort of in-joke amongst his fellow friars, possibly owing to his being, in G.K. Chesterton’s words, ‘a huge bull of a man, fat and slow and quiet’.

Thomas’s paramount achievement was to reconcile the philosophy of Aristotle (or simply ‘The Philosopher’, as he was known) with the teachings of the Catholic Church. In his classic work, the multivolume and unfinished Summa Theologiae, he took Aristotle’s metaphysics, philosophy of mind and moral philosophy, and neatly fitted them together into a Christian vision of a world made by God. (It wasn’t Aristotle’s fault that he wasn’t familiar with Christianity, since he lived more than three hundred years before Christ, so he did a jolly good job in the circumstances.)

But this wasn’t all the Dumb Ox wrote. In fact, his prodigiousness with the quill can hardly be comprehended: eight million words in total, or thereabouts; some two million of those on the Bible (which itself has a mere 774,746 words); another million on Aristotle; and the remainder on resources for students. His Summa Contra Gentiles was written as a manual for those arguing with Spanish Muslims and European Jews, providing snappy answers to all the conundra a mediaeval Christian might face.

At a mass in 1273 he had some sort of mystical experience (graceless sceptics suggest it was a stroke) and wrote nothing more. He said that, compared with what he had seen in his vision, all he had written was mere straw. Lots and lots of straw; but straw nonetheless. It must have been some vision.