The Life Inside by Andy West

Amna Whiston looks at a book on the liberating experience of teaching philosophy in prison.

The art of philosophising, Bertrand Russell tells us, is the art of rational conjecture. By this he meant the rational skill of articulating the most likely truth about something where it is impossible to know with certainty what the truth is. But what makes most people comfortable, Russell further observes, is their own opinions, where truth is a secondary consideration. Prisoners are no exception is this respect. The Life Inside is essentially about Andy West’s experience of teaching philosophy in prisons over a period of four years. It tells the story of his efforts inside the prison walls to bring to life the Socratic tradition of overcoming mere opinion through active critical thinking, while at the same time confronting his own feelings about his father, brother, and uncle, who all spent time in prison.

Teaching prisoners is highly taxing regardless of the educators’ personal circumstances. It requires teaching and communication skills, and an acute awareness of the differences between the goals of education and the goals of correction. It equally requires a sensitivity to prisoners’ uniquely existentialist, survivalist, attitudes to life, which are, despite any commonalities, all different. As West says in the opening pages of the book: “There is no such thing as the prison or the prisoner. There are a multitude of prisons and each person in prison has their own experience.”

As someone who has had family members in prison, West is well placed to face the challenge of teaching philosophy to inmates. This is mixed blessing; as much as West sees himself as fitting in culturally, and having a good grasp of convict logic, he places himself in an emotionally and intellectually demanding position. But his efforts evidently paid off.

A key merit of this book is the way West incorporates philosophical, descriptive, and psychological elements as with a fine Dickensian brush he paints a picture of the gritty details of prison life. At the same time he also shares with the reader what he cannot openly discuss with the prisoners – his inherited feelings of guilt and fears of ending up inside.

The book’s organised chronologically and thematically, each section covering a specific topic, including identity, desire, happiness, and truth. Throughout, West brings the ideas of philosophers, novelists, and poets to the prison classroom with a disarming subtlety, often starting with a quote to which his students typically respond with humorous remarks – although, as we learn, engaging prisoners in a conversation isn’t necessarily easy. Jeremy Bentham (1748-1832), the Utilitarian philosopher who equated happiness with pleasure, designed the grim Millbank Prison in London. “If Bentham designed places like this, do you think he knows what happiness is?” he asks his class. “I don’t know. I stopped thinking about him the moment I realized who he was” a prisoner replies (p.56). But humour comes to rescue, as is often the case: “Did you know it uses twice as many muscles to frown as it does to smile?” another prisoner adds. Whether West talks to the prisoners about Descartes on dreams, the paradox of Zeno’s arrow, Boethius’s ‘Lady Philosophy’, Plato’s story of Gyges, Anattāthe (the Buddhist idea that there is no self continuing through time) or Schopenhauer on life being a form of punishment, they often see the funny side of things. This is part of their survival mechanism.

West takes humour seriously enough – beyond an ice-breaking strategy. In a section dedicated to laughter, he retells André Breton’s dark joke about a man about to be hanged, who asks the executioner whether it is safe, and also Nietzsche’s story about Zarathustra and the laughter that overcomes tragedy. He interweaves his conversations with prisoners with his own personal stories. As he interprets Nietzsche’s view of the seriousness of life to the prisoners – where seriousness, as he explains, is the very reason to laugh – he shares with us anecdotes about his uncle, who can ‘laugh himself above pain’, and about his brother laughing with criminals to avoid being punished by them. 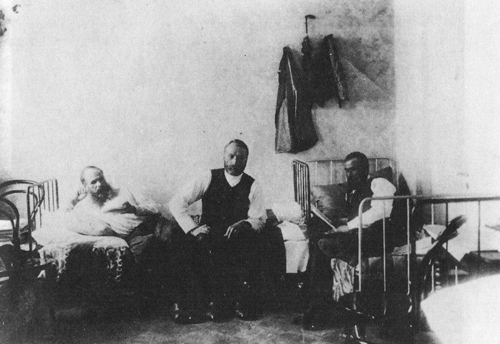 Dostoevsky and comrades in prison Dostoevsky is on the left

For West, making philosophy accessible to prisoners – many of whom didn’t finish school – is an opportunity to examine his own sense of identity, which is inescapably linked to prison. Those who are expecting in-depth philosophical analyses about this might be disappointed. But as West explains, sometimes, exchanging stories, connecting, and exploring points of relatability and difference, is a more fruitful path to ideas than the analytic route. Race, which West recognises as one of the most pertinent aspects of prison life, is a good example: “it is easier to have a conversation about race that wasn’t mediated by philosophy” (p.181).

This said, prisoners’ revelations and thoughts are often philosophically relevant. Some feel safer inside. One prisoner confesses to becoming more herself since she went to prison. For another prisoner, in the drug rehab unit, one must keep going and keep repairing. Change is possible! Or in a section on freedom, in which West talks to his students about Homer’s Odyssey, one prisoner proposes that freedom is freedom from choice. This is not a novel idea, of course. Fyodor Dostoevsky (1821-81), for one, had much to say about people’s sense of freedom in Siberia – like how hard work and suffering, and even stealing something and making it yours, can be liberating. Disillusioned by socialist ideals Dostoevsky pondered our dark, though all-too-human, side. His extraordinary literary artistry, which contributed to the debate about reforms in the Russian legal and penal systems, is carefully considered by West. He tells the prisoners about the momentous episode in Dostoevsky’s life when he was sentenced to death for his political activism, but received a last-minute reprieve and was sent to a Siberian labour camp instead. West then talks to them about Dostoevsky’s novels Crime and Punishment (1866) and The Idiot (1869).

One can imagine that West was understandably anxious about bringing Dostoevsky’s realism to the prison classroom. It comes as a relief – and there are several such moments in the book – when their response is what one hopes for. Raskolnikov, the murderer in Crime and Punishment, “is tormented by his conscience. He’s dogged by nightmares,” says West. To which a prisoner replies: “That’s good – that means you are not a psychopath, if you have nightmares about the stuff you’ve done” (p.240).

West is admirably open about what he describes as being “in the grip of wild irrational guilt” in years of “paranoia that the sins of his father will be handed down to him no matter what choice he makes” (p.13). West’s conversations with his brother Jason about Jason’s experiences of getting involved with criminals and ending up in prison before he started a family, are also quite moving. Prisoners, as much as anyone, are driven by the natural desire to protect their loved ones. Jason’s protesting that Andy should keep away from teaching in prison expresses his desire to preserve Andy’s innocence. But the truth is that for Andy teaching philosophy in prisons, hoping to make a positive difference to prisoners’ lives and learning about them as people, is his way of dealing with his own inner prison. He learns that for some prisoners, living outside feels like being forced to make constant choices, and being inside is being free from financial pressures. The logic of a prisoner, as Andy poignantly notes, is nothing but human. In revealing his motivation for writing this book he’s also honest about human salvation. As he says, “I don’t sincerely want to save my dad. I want to save myself. I want to make him less bad, so I don’t have to inherit his badness” (p.135). Again, his emotional honesty is dazzling.

Finally, West quotes Sam Harris on the value of truth, with lying being a lost opportunity to deepen our connections with someone else. But lies – as when a prisoner tells West that he previously shared cells with famous criminals including Charles Bronson and Abu Hamza – can also be the result of a lost sense of connection to others. Lies can also be used to protect others: for instance, when he was a young boy, West’s mother told him that his incarcerated brother was away at work. Crucially, however, lies are not liberating, and the truth can be kinder than a lie. We often want to know the truth so that we can move on. Forgiving others’ culpability and embracing kindness can be a way of moving forward. The last section of West’s book is about kindness.

Not much has been written about the use of philosophy in prisons, nor about the experience of prisoners engaging in philosophy. Particularly given this gap in the literature, West’s contribution is of great value. He offers an insight into prisoners’ minds, raising awareness about the effects of long-term imprisonment, the effects that imprisonment have on families, and how the pandemic has affected prison life; and his endeavour to introduce philosophical conversation into the prison environment is inspirational. Equally, his book is a profoundly moving emotional journey that transcends the differences between the different kinds of prisons people find themselves in. Not many publications achieve this kind of multiplicity.

Amna Whiston specialises in ethics and the philosophy of mind, and her current research focuses on the normative dimension of emotions.

The Heart Has Its Reasons: An emotional tribute to Robert C. Solomon