Andrew Fiala asks if it’s possible to have all three at once.

You’ve seen T-shirts, posters, and even band-aids emblazoned with peace signs, hearts, and smiley faces. Bumper-sticker wisdom, building upon the idealism of the 1960s, affirms what we might call ‘the hippy trinity’: peace, love, and happiness. We suspect that if we were more peaceful and loving, we would be happier. And if we were happy, it would be easier to love others and live in peace with them. One source for this idea may be the Apostle Paul, who said in his New Testament letter to the Galatians that the fruits of the Spirit include love, joy, and peace. A more contemporary source is the blues and hip-hop artist G. Love. One lyric from his song ‘Peace, Love, and Happiness’ is:

“I got no time to worry
About troubles or misgivings
You got to let it flow, let yourself go
‘Cause if you’re hating, then you sure ain’t living
Give me some Peace, Love, and Happiness”

The Beatles made it simpler, asserting that “love is all you need.” John Lennon asked that we “give peace a chance.” Pharell Williams more recently sang that “happiness is the truth.”

Unfortunately, pop poetry can only take us so far. The optimism of San Francisco’s Summer of Love runs aground on the wisdom of Athens, Jerusalem, and Bodh Gaya (where the Buddha is said to have obtained Enlightenment). The world’s major philosophical and religious traditions tell us that life remains tragic and difficult, and that peace, love, and happiness are never easily found. Peace, love, and happiness are also in conflict with other values, such as self-sufficiency, liberty, and justice. Smiles and hugs cannot end war, eliminate religious and ethnic conflict, nor cure psychopathology. Most of the world’s traditions therefore admit that the goal of uniting peace, love, and happiness creates a difficult and chronic, even eternal, project.

One difficulty, perhaps impossible to surmount, is the fact that the conjunction of peace, love, and happiness contains internal contradictions. Consider the fact that love may require violence: love may oblige me to fight to defend my loved ones. Indeed, love of country or of God may inspire war. Love may also lead to unhappiness: for instance, the lover suffers when the beloved dies. To love is to open oneself to grief and loss. And love easily becomes jealous and vengeful. It is no wonder that the Stoics advised equanimity and emotional self-control rather than passionate love. Tranquility is not easily cultivated when love inflames the heart.

Peace may also result in unhappiness. Those who are defeated by cruel oppressors may lay down their arms. But forced submission creates an unhappy peace that conflicts with the value of liberty. Even apart from the ‘peace’ of the pacified slave, there is no denying that peace is often achieved by sacrificing other important values. We may choose to give up on legitimate claims for justice, reparation, or respect in the name of peace. Moreover, Nietzsche argued that peace was merely the pallid dream of the mediocre, while powerful men were inspired by danger, adventure, and war.

Happiness is also complicated. A certain sort of happiness develops from the single-minded pursuit of one’s aims. The creative joy of the artist, inventor, or genius often comes at the expense of those she loves. Although Aristotle thought that happiness included social virtues, he also believed that self-reliant contemplation was the highest form of happiness. The self-reliant individual finds happiness alone: he loves the truth, but does not necessarily love other human beings. And for some people, happiness is linked to competition, victory, and domination. We know for example that victory and domination give men a satisfying boost of testosterone. One source of war, conflict, murder, and misery, is the ugly fact that violence makes some people happy. 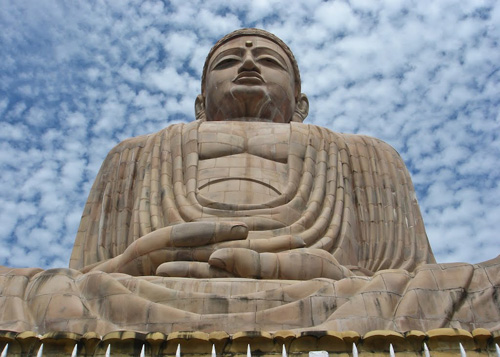 Statue of the Buddha at Bodh Gaya

To resolve these difficulties we need to think deeply and clearly about the meaning of peace, love, and happiness. It may seem mean-spirited to spoil the buzz of the blissfully smiling hippy dreamer whistling Bobby McFerrin’s ‘Don’t Worry, Be Happy’. Life is hard, and if people find peace, love, and happiness in a song or a slogan, we ought not begrudge them their slice of heaven. But the demands of ethics should make it difficult to smile in a world of pain and injustice. Common sense reminds us that blissful moments do not last long, and a bit of reflection reminds us that our happiness to an extent rests upon the backs of those who slave in fields and sweatshops. Is anyone entitled to peace, love, and happiness in a world in which children are raped, where slavery continues, and where species go extinct at the hands of humanity?

The problem of the suffering of others is a central concern for both theists and Buddhists. Leszek Kolakowski once asked in an essay, ‘Is God Happy?’ He pointed out that a just and loving God must be incredibly sad to see the suffering of humanity. Kolakowski also argues that the Buddha would be deeply unhappy to know that most of the world remains bound to the wheel of suffering. However, contemporary Western images of Buddhism often portray it as providing a personal path to peace, love, and happiness. For example, Mathieu Ricard, a Buddhist monk of French origin, is touted as the world’s happiest man, and his books are marketed in such a way that they appear to provide a recipe for personal happiness and peace. Ricard himself, however, makes it clear that the key to happiness is practice, discipline, and compassionate concern for the suffering of others. We shouldn’t forget that Buddhism begins with the assumption that life is suffering! Or consider another popular Buddhist author, Thich Nhat Hanh. As Hanh explains, “the mind of love brings peace, joy, and happiness to ourselves and others” (Wisdom from Peace Is Every Step, 2005). This sounds simple, but it takes years of training to develop a mind of love, inner peace, and joyful compassion. Buddhist practice is not merely selfish navel-gazing. Indeed, it can lead to anguished engagement with an oppressive and violent world – as witnessed by the monks who immolate themselves in protest against repressive regimes in Tibet and elsewhere. The fact that a religion of peace, love, and happiness leads to suicidal protest in the face of oppression gives much food for thought.

Christianity provides a similar source of contemplation. The turmoil, sadness, suffering and cruelty of the cross are an essential part of the Christian story. We noted already that Paul imagined the unity of peace, love, and happiness in the life of the Spirit; but like Jesus himself, Paul was arrested and executed.

For Christians, peace, love, and happiness are ultimately found far beyond the tumult of earthly life, death, and politics. Saint Augustine argued in his book The City of God (426) that happiness and peace cannot be found in this life. He contrasts Christian wisdom with that of the earlier Greek philosophers, the Epicureans, Stoics, and Cynics, who maintained that happiness could be produced in this life by philosophical reflection. Augustine claimed that worldly happiness was insufficient, and that eternal happiness, lasting peace, and true love were only possible in union with God, only fully achievable in the afterlife. For Christians, the path to peace, love, and happiness passes through and beyond this world of wickedness, sin, and suffering.

Is A World Of Peace, Love & Happiness Possible?

The Greeks criticized by Augustine thought otherwise. Epicurus (341-270 BC), for example, taught that a simple life, withdrawn from the tumult of politics, and spent in the company of loving friends, could be peaceful and happy. Epicurus also maintained that to enjoy peace and happiness you must cultivate justice, since injustice produces social conflict. But, Epicurus added, if you want to be happy and find peace, you should avoid political life and its stressful and dangerous entanglements.

There are clear Epicurean elements in the hippy dream – especially in the idea that simple living apart from the mainstream is the key to peace, love, and happiness. The problem, however, is that Epicureans can be accused of free-riding. Is it right to retreat to your garden while the outside world is plagued by war, hate, and sorrow?

In response to this problem, the Stoics maintained that we have a duty to serve society. So Stoics sacrifice their own peace, love, and happiness for the good of the many. For instance, the Stoic Marcus Aurelius, Roman Emperor from 161-180 AD, would have preferred to stay home with his loved ones and develop himself as a philosopher, but his political obligations led him to sacrifice his health and tranquility for the good of Rome.

Building upon the political perspective, we might note – as Steven Pinker has argued recently in his book, The Better Angels of our Nature (2011) – that peace, love, and happiness are the result of civilizing processes, including military and police power. In other words, Westerners can enjoy peace, love, and happiness because our borders are secure, our homes are comfortable, our economies run smoothly, and our institutions are stable. Sadly, the same cannot be said for many others across the globe.

The peace, love, and happiness celebrated in counter-cultural songs and bumper-stickers may rest upon European and American military, economic, and social power. Nonetheless, many advocates of the peace-love-happiness trinity are critical of police power, military force, and obedience and conformity. Some argue that the structures of imperialistic and militaristic civilization are internally contradictory – that they create the very ills they claim to solve. So peace is undermined by preparation for war. Love is destroyed by oppressive hierarchies. Happiness is subverted by the demands of work, conformity, and bureaucracy. But it may be that military power, obedience, hierarchy, and conformity are essential for peace, love, and happiness. It may be that best place to find peace, love, and happiness is in Epicurean gardens nestled safely in the heartland of an empire.

“You may say I’m a dreamer
But I’m not the only one
I hope someday you’ll join us
And the world will be as one.”

Andrew Fiala is a Professor of Philosophy, Chair of the Philosophy Department, and Director of the Ethics Center at California State University, Fresno. He has published a number of books on ethics and political philosophy, and is co-author with Barbara MacKinnon of the 8th edition of Ethics: Theory and Contemporary Issues (Cengage Publishing). He also writes a regular column for the Fresno Bee.

In Defence of War by Nigel Biggar

The “Ugliest of Things”?