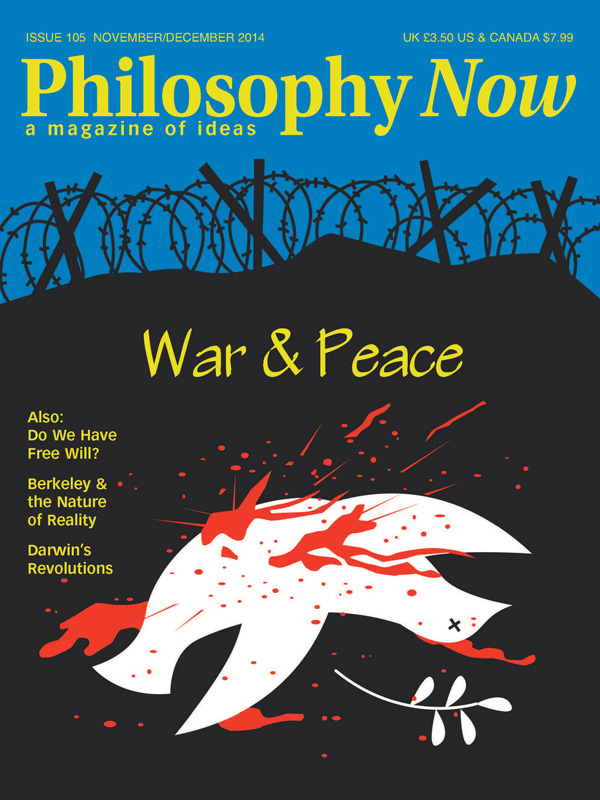 Give (Thinking About) Peace A Chance

Be A Stoic For A Week! • DesAutels is Woman Philosopher of 2014 • Brian Leiter Steps Down — News reports by Sue Roberts

Duane Cady tells us why pacifism isn’t sitting back and letting the masters of war have their way.

Andrew Fiala asks if it’s possible to have all three at once.

The “Ugliest of Things”?

Anja Steinbauer considers some criticisms of pacifists and pacifism.

“That Mystery of Mysteries”

Toni Vogel Carey on a forgotten solution to the question of the origin of new species.

How Darwin Ruined My Sex Life

The Key Ideas of Western Philosophy

The Fourth Dialogue Between Hylas & Philonous

In 1713 George Berkeley wrote Three Dialogues between Hylas and Philonous on the nature of reality. Roger Jennings considers how it might have continued…

Atheist In A Foxhole

David Rönnegard asks how a committed atheist confronted with death might find consolation.

Alistair MacFarlane takes a pragmatic look at the life of an American genius.

How Should Society Be Organised?

The following answers to this vital question each win a semi-random book.

A Metaphysics For Freedom by Helen Steward

We exercise free will this issue as Les Reid defends A Metaphysics For Freedom.

The Moral Countenance of Art

Emrys Westacott asks if we can really tell what it is that films and other art are either condemning or condoning.