Give (Thinking About) Peace A Chance

2014 has marked the 100th anniversary of the outbreak of World War I. In the intervening century, the world has witnessed numerous regional and international hostilities. In addition, acts of interpersonal violence, sometimes stunningly brutal, are reported daily in the news. In spite of our professed desire for peace, we continue to treat each other and the rest of the world – meaning other species and the very environment itself – in pretty nasty ways. Every major religion proclaims the message of peace, yet much of the violence in the world continues to occur in the name of those very religions. Individuals and governments also claim that violent actions in the defense of what is right are not wrong. We all say: “They started it, we’re just trying to end it!” And with today’s technology, we don’t just say it, we shout it.

If I asked you to define ‘peace’, what would you say? Most people end up saying something along the lines of peace being the absence of war or violence. But note that this conception places violence as the central, basic concept, with peace being a secondary, derivative one. While the absence of actual hostilities is of course important for peace, it reflects only what philosophers call ‘negative peace’. But at least as important is ‘positive peace’ – the presence of the conditions necessary for being free to peacefully thrive and fulfil one’s potential. Living in a state of poverty, prejudice, fear or degradation is not peaceful, regardless of the absence of physical violence. That is to say, murder is violent; but so, too, is starvation, at least for the person who is starving. Psychological, emotional, and economic abuses are experienced as violence just as much as are physical blows. To this extent, and for this reason, peace – especially peace as freedom to and not merely as freedom from – is intimately related to justice, and any genuine attempt to promote peace requires addressing issues and questions of injustice, personal and social, as both a form of violence and a cause of violence.

Equally relevant is seeing the connections between interpersonal peace – peace with others – and intrapersonal peace – peace within oneself. It is difficult to have inner peace if you live in a context of threats, intolerance or discrimination; at the same time, it is difficult to get along with others and respond to conflict nonviolently if you live in an inner state of confusion, humiliation, or rage. As Gandhi noted, “It has always been a mystery to me how men can feel themselves honored by the humiliation of their fellow beings… I claim that [the] human mind or human society is not divided into watertight compartments called ‘social’, ‘political’ and ‘religious’. All act and react upon one another.”

It is also important to remember that violence is not the same thing as conflict. Conflict means the clash of incompatible desires. So when two chess masters sit down to face each other, each one wants to win, but only one will; they have conflicting desires. This is conflict, but not violence. Violence is only one response to conflict – one form of behavior among many. There are other, nonviolent, responses, such as negotiation, cooperation, compromise, changing perceptions, and even nonviolent persuasion. 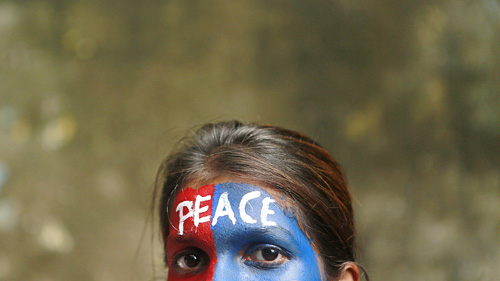 Academic philosophers have spent much time and energy on resolving logical paradoxes, such as whether or not a barber will shave himself if he shaves all and only those who don’t shave themselves (Bertrand Russell), or whether or not proper names refer to the same individual in all possible worlds (Saul Kripke) – and there are good reasons for wrestling with these abstruse conundrums. Some attention to fundamental issues of peace and violence has also been paid by some of history’s major thinkers, such as Rousseau, Kant, and Bentham. Nevertheless, if philosophy should be concerned with the problems of people, and not merely with the problems of philosophers, then the track record of serious focus on this basic aspect of our lives is shamefully lacking. The articles by David Barash, Duane Cady, Jessica Park, and Andrew Fiala in this issue of Philosophy Now are a step toward addressing that lack of attention. They range over just a few – but an important few – aspects of understanding and promoting peace: whether or not we are naturally violent; modes of responding to conflict and violence; steps to overcoming everyday interpersonal violence; some interconnections between peace and other important values. Meanwhile, Anja Steinbauer considers some possible philosophical objections to pacifism.

David Boersema teaches philosophy and peace studies at Pacific University in Forest Grove, Oregon. He is a former executive director of Concerned Philosophers for Peace. His publications include Pragmatism and Reference (MIT Press, 2008) and Philosophy of Human Rights (Westview Press, 2011).

No Consolation For Kalashnikov

The First Servant In Iraq