Today some universities have courses in the Philosophy of Music. They study such questions as: What is the definition of music? What makes us say that a particular set of sounds is music while another set of sounds is not? What is the relationship of music to the mind? How does music affect (a) our emotions, (b) our intellect? How can we evaluate the value of any given piece of music? What is the relationship between a piece of music and its performance? What do we mean when we say a piece of music is sad? Where does the ‘sadness’ reside? and so on. Such questions are treated in a highly technical way in, for example, the article ‘Philosophy of Music’ in the on-line Stanford Encyclopaedia of Philosophy. There we can see what issues about music are being debated by the current academic establishment.

That is not what I want to do in this article. This is historical, describing what some individual philosophers have said about music. I could not find any website that gives an account of how significant philosophical ideas about music have developed over time. That time seems to me to end with Friedrich Nietzsche, who died in 1900. Since then, it seems to me, no great name in philosophy has given music a significant place in his philosophy – although there are of course many lesser philosophers who are not (relatively) household names who are referred to in the Encyclopedia.

The other thing that struck me is the enormous time gap between, on the one hand, the two philosophers of antiquity, Pythagoras and Plato, who said something about the philosophy of music, and the topic being taken up again in the Eighteenth Century by Leibniz. So the bulk of this article will deal with a relatively short period, from about 1714 to about 1889, during which time famous names in philosophy – Leibniz, Kant, Schelling, Schopenhauer, Nietzsche – concerned themselves with ideas about music.

But to begin with the ancients: 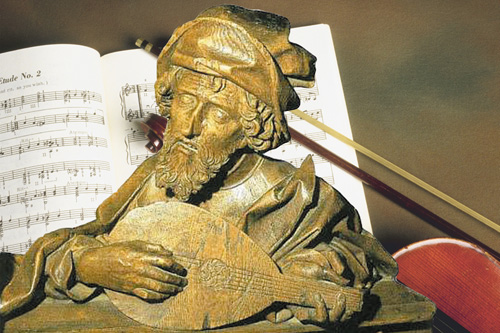 Pythagoras was the principal figure in the cult named after Orpheus, whose music was said to have embodied divine mysteries. Pythagoras believed that “all things are number”: things come into existence when mathematical order is imposed on the formless stuff of the universe. He is believed to have come to this idea after discovering the importance of mathematics in music. The legend is that as he was passing a smithy, he was struck by harmonies that pleased the Greeks (the octave, the fifth and the fourth) being created when two hammers of different weights struck the anvil. If one hammer was half the weight of the other, you would get an octave; if one was a third of the weight of the other, you heard a fifth; if one was a quarter of the weight of the other, you heard a fourth.

Unfortunately for this anecdote, the pitches of sounds made by a blow do not vary proportionately with the weight of the instrument used. But this theory of proportions does work when you pluck strings after stopping them half way, a third of the way, or a quarter of the way along their length. Musical order and beauty are similarly the result of order and harmony being carved out of cacophonous noise. Pythagoras also originated the idea of the heavenly ‘music of the spheres’, inaudible to us, made by the movement of the planets around the earth.

Plato discussed music as part of the training of the emotions of the Guardians of society in his book The Republic (380 BC). He thought Lydian and Ionian harmonies ought to be banned because they express sorrow and relaxation respectively. Only Dorian and Phrygian harmonies are to be allowed, because these express courage and temperance.

There is then an enormous gap in significant philosophising about music until we come to:

In his La Monadologie (Monadology, 1714), Gottfried Leibniz explained our response to art through subconscious perceptions (“les petites sensations”) of “the secret arithmetic” of intervals and other relationships in music and painting.

After this, Immanuel Kant wrote a book on aesthetics, The Critique of Judgment (1790), in which he described aesthetic qualities as those which give us “disinterested pleasure”. They do this through their beauty, which Kant, as a classically-inclined thinker, saw in their harmony of form; or through their sublimity – meaning a perceived grandeur or power that does not threaten us. Moreover, aesthetic productions, mediated by individuals of genius, present themselves to us to be perceived as a whole – unlike scientific truths, which are arrived at by a process of step-by-step reasoning. This idea is a bridge to Romanticism, in which movement the transcendental idealists developed the idea further.

Friedrich Schelling was the first of these transcendental idealists, and the first philosopher who thought that instrumental (as distinct from vocal) music was the purest and most disembodied of the arts, and enabled us not only to glimpse the Absolute – a word he coined, although Kant had talked about absolute truth being found in the Ding an Sich [‘the thing-in-itself’] – but during that experience, to see ourselves as an integral part of it. This idea would be taken much further still by:

The dominant idea of Arthur Schopenhauer’s philosophy was that it was almost impossible for us to escape from ‘the Will’ – the drive or striving of nature that controls all creation, which is cruel and ruthless, and which cares not for the individual in the survival of the species. Yet there are some ways in which we can emancipate ourselves from the Will for brief periods. Compassion and asceticism are two of these, but art is another; especially in its highest form, music. There is a sensory description in terms of sound or sight signals we receive when we hear music or see a work of art; but more significant to Schopenhauer is the experience, which transports us into a non-sensory realm, giving us a feeling of at-one-ness with something beyond ourselves, that is, with the noumenal Will. Other ways of putting this include when we say we are ‘taken out of ourselves’ into an experience we often call ‘timeless’; or when we perceive some all-pervasive truth – the Universal in the Particular. Artists who have had these perceptions can pass them on to others – through art, not by exposition, and then only to people who can respond in the same way to the art they encounter. However, artists who model themselves on other artists, or who simply respond to artistic fashion, do not produce real, that is, authentic, art. Nor is authentic art about self-expression: it must be in touch with something bigger than the self. This contemplation must not be accompanied by a desire to possess, or, in the case of contemplating sublime natural phenomena like thunderstorms, by fear.

Schopenhauer defines genius as the capacity of the artist to perceive and convey the eternal. As with Plato, this perception is imaginative, not intellectual. The moment art becomes an intellectual pursuit (for example in allegorical painting or in copying formulae which have been successful for other artists) it ceases to be a means of penetrating to the eternal. Such people have no more than talent: “Talent hits a target no one else can hit; genius hits a target no one else can see.”

Someone who frees himself from the Will will generally lack that which the Will dictates for survival: how to operate effectively in the world. That’s why artists are often ineffective in practical life, and isolated from other people.

Schopenhauer’s Hierarchy of the Arts

Above architecture (called “frozen music” by Schelling) are painting and sculpture – all of which are after all tied rather closely to the phenomena with which they deal rather than the truth of the Will behind the phenomena – then prose, which is at its highest when it is least concerned with plot and action and most with contemplation; poetry; drama – and above all the tragedies in which the protagonists let go at the end of life in acceptance, resignation, a ceasing of striving, an abandonment of (the) Will. However, for Schopenhauer, music is the highest art of all, because it is the most abstract, the least tied to phenomenal concepts. In 1877 Walter Pater was to write that "all art aspires to the condition of music." He meant that all true art should strive to get as close as possible to the purity of Schopenhauer's concept of abstract music. Later, abstract painters would eschew concrete representations of the world; and some of them, such as Kandinsky, would often give titles with musical connotations to their paintings. Music can, for instance, express all the emotions (joy, sadness etc) as such, without any accessories or motives. Note the extra ‘inexpressible’ dimension music can give to opera, often overcoming the sheer banality or absurdity of the plot or libretto.

That music speaks of and will be found in another, heavenly, world has been understood since the beginning of human consciousness. (As mentioned, Pythagoras had shown the relationship of music to mathematics, and to the ancient Greeks mathematics was considered the closest approach to the meaning of the world. Some people thought that that point had received further proof when Newton successfully combined mathematics and astronomy.)

Schopenhauer’s philosophy of music as being best when at its most abstract ran counter to Wagner’s early theories of Gesamtkunstwerk; but once Wagner had read Schopenhauer in 1854, he theoretically agreed with him and become his ardent disciple. In practice, Wagner continued to marry text and music as powerfully as he had done before, but in Tristan und Isolde (1856), for the writing of which he broke off writing Siegfried, he came closest to giving the music the full Schopenhauerian role.

Although there was much in Schopenhauer’s philosophy with which he disagreed, Friedrich Nietzsche was also influenced by his ideas on music. In The Birth of Tragedy from the Spirit of Music (1871), Nietzsche agreed that through art, and especially through music, one can for a while escape from the misery of earthly life and have a glimpse of the transcendental.

Nietzsche also picked up on Wagner’s idea that there were two elements in the arts which should balance each other: the Apollonian (creative order or organisation) and the Dionysian (chaotic inspiration). He initially saw this fusion in Wagner’s music, and believed that Wagner’s art was, among other things, the salvation of Germany. But he turned against Wagner in 1876, and in Nietzsche contra Wagner (1889), he accused him of, among other things, having abandoned the necessary Apollonian element.

Ralph Blumenau lectures on the History of Philosophy at the University of the Third Age in London, and is the author of Philosophy and Living (Imprint Academic, 2002).

Obscurantism & The Language of Excess

How To Be A Philosopher

Memoir of a Jolly Junket in Search of Bishop Butler