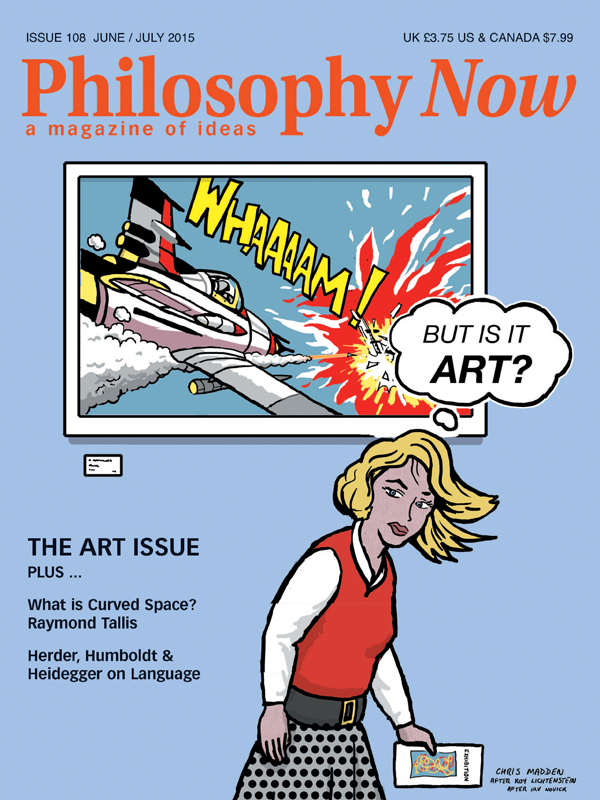 Is a chimpanzee a person? • Is an android a person? • Editing the human germline — News reports by Anja Steinbauer

Art As An Encounter

The Hard Case of Duchamp’s Fountain

Launt Thompson argues that some popular trends in art criticism are fallacies.

The Afterlives of Modernism

Descartes versus Cudworth On The Moral Worth of Animals

Samuel Kaldas compares two views on the nature of animals and their implications for our moral responsibility towards them.

Can The World Learn Wisdom?

Nicholas Maxwell points out where the Enlightenment went wrong.

Rick Lewis on the joys of taking a philosophy degree from your armchair.

David Rönnegard laments having to leave the party early.

The Place of Self-Interest in Morality

Jos Philips considers when acting on your self-interests is morally acceptable too.

Alistair MacFarlane appreciates the life of an infamous art prophet.

What is Art? and/or What is Beauty?

The following answers to this artful question each win a random book.

Emotion and Imagination by Adam Morton

Don Berry probes the connection between Emotion and Imagination.

Lantz Fleming Miller considers the nature versus nurture divide in Beyond Human Nature.

Thomas Wartenberg asks if you really know yourself.

Allegory of the Living Room

Joe S. Kimbrough II wonders if our condition is better than that of Plato’s prisoners.