Although the span of a couple of centuries separated them, the German philosophers Herder, Humboldt and Heidegger shared a similar conception of language. Departing from the classical conception of language as merely for communication, they all proposed that language, and not ‘transcendental reason’ (as previously advanced by Kant) was responsible for the formation of thought and, by extension, of knowledge. Conceived in this light, language was held to be constitutive of men’s (and by extension, nations’) various worldviews. One major upshot of this was to place all viewpoints on an equal footing: henceforth, there was no longer one universal, ‘objective’ way of knowing the world.

This turn culminated in the early Twentieth Century, under Heidegger. Carrying his predecessors views to an extreme, he held that language, by ‘instituting being’, defined reality.

Starting in the 1770s, Johann Gottfried von Herder (1744-1803) was the first modern Western philosopher to seriously suggest the primacy of language in the constitution of thought. In contrast to Immanuel Kant (1724-1804), he based the possibility of knowledge in the sense experiences through which the individual encounters the world. By paying attention to one particular phenomenon – for example, the bleating of a sheep – the soul produces a ‘clear concept’ and a distinctive word with which the concept can be recalled and communicated: “The human being demonstrates reflection when the force of his soul operates so freely that in the whole ocean of sensations which floods the soul through all the senses, it can… freely dwell on a single image, pay it clear, more leisurely heed, and separate off characteristic marks for the fact that this is that object and no other… The first act of this acknowledgement provides a distinct concept… With it human language is invented” (Treatise on the Origin of Language, 1772). Herder assigned to language a crucial role as the medium through which knowledge was produced: “Language as a whole must be an expression of the cognitive understanding… in the formulation of the concepts themselves, and as such must prove itself as a living form” (ibid). So Herder sought to correct Kant’s theory of knowledge by arguing that language provided the organizing principles for our experience, insofar as it acts as the medium through which our subjective perceptions are conceptualized, reflecting the individual mind’s encounter with the world, independently of the nature of things as they are in themselves independent of our perception of them. Herder’s embodied reflective reason was therefore contrary to Kant’s transcendental reason.

Within this new framework, language was no longer confined to a merely communicative function, but embraced an active role, generating man’s knowledge. Henceforth, knowledge would be predicated on language. Crucially, this meant that Herder shattered the universalist claims of the Kantian model of knowledge. Instead, he opened up the epistemological horizon, paving the way for many new possible ways of justifying various understandings of the world. However, this cultural relativism was tempered by a providential vision of human history. According to Herder, all the successive epochs and cultures played a meaningful role in what, according to historian Maurice Olender, was fundamentally a ‘cosmic melody’. 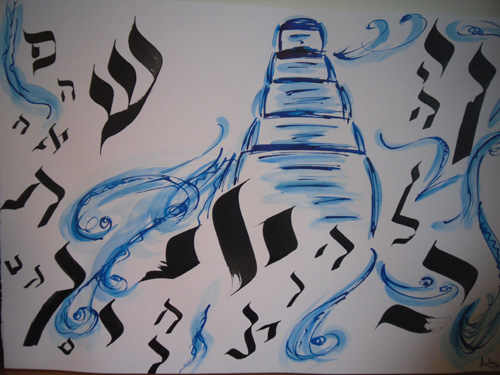 Babel by Audrey Borowski: “Now the whole earth had one language and the same words” (Genesis 11:1).

The linguist and anthropologist Wilhelm von Humboldt (1767-1835) further developed the interdependence of language and thought, articulating a more forceful ‘expressivist’ conception of language, most notably in his major treatise, On the Diversity of Human Language Construction and its Influence on the Mental Development of the Human Species (1836).

Like Herder, Humboldt posited language as the “formative organ of thought.” Man’s judgmental activity was inextricably bound up with his use of language. However, Humboldt relied on a remarkable new interpretation of language heavily informed by the biology and physiology of his time: to him language was an activity (energeia) as opposed to a work or finished product (ergon). Far from being a ‘dead product’ or an ‘inert mass’, language was a ‘fully-fashioned organism’ that within the limits of an underlying universal template was free to evolve spontaneously, allowing for maximum linguistic diversity. Language was destined to be in perpetual flux, renewal, affecting “a continuous generation and regeneration of the world-making capacity.” A powerfully spontaneous and autonomous force, it brought about “something that did not exist before in any constituent part.”

At the heart of the linguistic process lay an in-built mechanism, a feedback loop, that accounted for language’s ability to regenerate itself. This consisted in the continuous interplay between an external sound-form and an inner conceptual form, and their “mutual interpenetration constitute[s] the individual form of language.” The dynamic and self-generating aspects of language are therefore inscribed in its very core. Yet as much as the finished product could be analysed, the actual linguistic process itself defied any attempt at scientific scrutiny, remaining inherently mysterious. Language may well abide by general rules, but it was fundamentally akin to a work of art, the product of a creative outburst which “cannot be measured out by the understanding.” Humboldt therefore elevated language to a “quasi-transcendental status” (Cristina Lafont, Heidegger, Language and World-Disclosure, 2000), endowing it with a ‘life-principle’ of its own – the manifestation of a free, autonomous, spiritual force. Indeed, Humboldt denied that language was the product of voluntary human activity, viewing it instead as a “mental exhalation”, a “gift fallen to [the nations] by their own destiny” partaking in a broader spiritual mission. In this way, the various nations constituted diverse characters pursuing spiritual paths of their own, with each language existing as an individual spiritual creation.

In spite of Humboldt’s attempt to salvage universalism for knowledge, his view of language inevitably ushered in an epistemological relativism, with each language yielding a peculiar way of seeing the world. For “man [lives] with the objects… exclusively in the way that they are conveyed to him by language” with language “placing definite boundaries upon the spirits of those who speak it.” In this light, language was construed as a ‘contingent absolute’ as German philosopher Jürgen Habermas later put it. Crucially, this radical relativism seemed to blur the distinction between mere knowledge and reality itself. Indeed, within such relativism, language seemed to embody reality itself, anticipating Heidegger’s later development more than a century later.

In keeping with his predecessors, Martin Heidegger (1889-1976) starkly opposed any passive, instrumental understanding of language. The rules of word-formulation could not possibly encapsulate language’s essence. Language could only be grasped on its own terms, as a force of its own, intimately bound to Being [consciousness], whose voice it conveys to man. It was “neither expression nor a matter of human manipulation” but merely “spoke.” Furthermore, man needs to break free from the reductive understanding of language that had hitherto prevailed in order to embrace a more authentic kind of thinking which would enable him to heed to the voice of Being.

In his attempt to carry out a transformation of philosophy, Heidegger radicalized Humboldt’s position even further. Heidegger went further than his predecessors by grounding his theory of ‘ontological difference’ in language. According to this idea, human consciousness’s very access to entities was predicated on language. Simply put, there was no being, no prior distinct existence, from which any essence for anything could be understood, without a linguistic understanding of it. In the words of the German poet Stefan George, “there is no thing where the word is lacking” (from ‘The Word’, 1928). Heidegger expanded on this ‘ontological’ nature of language in his essay ‘On The Way To Language’: “The thing is a thing only where the word is found for the thing… The word alone supplies being to the thing, [for] something only is, where the appropriate word names something as existing and in this way institutes the particular entity as such… The being of that which is resides in the word. For this reason, the following phrase holds good: language is the house of being” (On the Way to Language, 1959). Within this framework, language is world-instituting, since it brings about a ‘happening of being’ in which man is thrown and through which a world appears.

Heidegger therefore proffered a strikingly metaphysical conception of language, thereby carrying to the extreme the reification (that is, the ‘objectification’) of it already initiated by Humboldt. Within this new configuration, language takes on a life of its own, prevailing over humanity and remaining its ‘master’. In his essay entitled ‘Language’ in Poetry, Language, Thought (1971), Heidegger consecrated language as that which “grants an abode for the being of mortals”; that which “first brings man about, brings him into existence.” Perpetually preceding man, language possessed the unique ability to attune him to the voice of Being – to ground him, and “bring him into dwelling”. In this sense, language was endowed with an “authentic poetic dimension”. Heidegger drew on the poetry of poets such as Friedrich Hölderlin and Georg Trakl to illustrate language’s ability to “establish something present at hand… instituting being… through the word and in the word” by summoning “things to the world and the world to the things.” Within this framework, language institutes truth, with each ‘unconcealed’ entity graspable only on its own terms. The essence of things is no longer transcendental, as Kant thought, but located within the contingent, the relative, the ‘essentially factical’ as Heidegger put it. Henceforth, truth is reframed exclusively in terms of projections of meaning through language which vary historically. Thus any sense of an overarching absolute dissolved before a flux of self-referential ways of categorizing reality. The absolute was relativized, and truth historicized. Crucially, no greater external perspective, no absolute standard, exists against which to measure the various disclosures of being – an idea that German thinker Theodor Adorno felt was prone to legitimizing Fascism.

Heidegger therefore brings us full circle back to reality itself, his extreme conception of language being in many respects the natural consequence of the linguistic turn initiated by Herder. Remarkably, at the heart of this linguistic revolution lay the metaphysical, poetic dimension of language, without which, in the words of American philosopher Albert Hofstadter, man would either be a “brute or an automata,” and which dimension alone enables man to lead an authentic, human life.

Audrey Borowski is an Oxford graduate, and is doing a PhD in the History of Ideas. She’s interested in the history of linguistic thought.

Time of the Magicians by Wolfram Eilenberger