Leibniz & the Infinite Mechanism of Life

Audrey Borowski peers into the infinity inside all organisms, including us.

Far from shunning the infinite as his philosophical predecessors Pascal and Descartes had done, Gottfried Wilhelm Leibniz (1646-1716) embraced and celebrated it, seeing it as a mark of the divine. According to him, the infinite permeated reality, in the microscopic as well as in the infinitely large, in such a manner that “every particle of the universe contains a world of an infinity of creatures” (Leibniz, Collected Papers and Letters, Series 6, Volume 4, 1647-8).

Leibniz was writing at a time of intellectual upheaval. The ­early Seventeenth Century had ushered in an era of scientific discoveries and innovations – an era in which mechanism, as exemplified by clockwork, had emerged as the privileged conceptual tool through which to elucidate and grasp the cosmos, the state, and even the human body. The application of this mechanized world picture to life was pioneered by René Descartes, who in his Treatise on Man of 1637 effectively equated living bodies to complex automata. Descartes could “see no difference between the machines built by artisans and the various bodies composed by nature alone.” (p.50).

Leibniz felt that the moderns had erred in ascribing this godless model to life itself. He set out to restore the uniqueness of life by positing that infinity was its defining feature. For Leibniz, even in their smallest parts organisms were machines – and therefore were machines ad infinitum, akin to onions that could never be completely peeled. Organisms preserved their infinitely nested mechanical structure, and always remained “the same machine” throughout the various changes they underwent, “being merely transformed through different enfoldings.” (Leibniz, New System of Nature, 1695). Moreover, only the particular kind of infinity displayed by natural organisms yielded true unity – which unity in turn endowed them with sensation, perception and consciousness (Letter to Sophie and Elizabeth Charlotte, November 1696). Each was animated by an “always subsisting unity” (ibid) – a primitive communications network which also expressed the activity of all the machines nested in it, unfolding in concert with them. Within this mechanism, both material and spiritual realms developed in perfect correspondence whilst never directly interacting, in ‘pre-established harmony’. By contrast, even the most artfully assembled artificial machine could never hope to overcome its essential state of being aggregated from parts. So more than three centuries before debates surrounding artificial intelligence, Leibniz had already warned of the inherently nonconscious nature of artificial machines: although they might behave as if animated by a unifying spiritual force, they would still be essentially soulless. 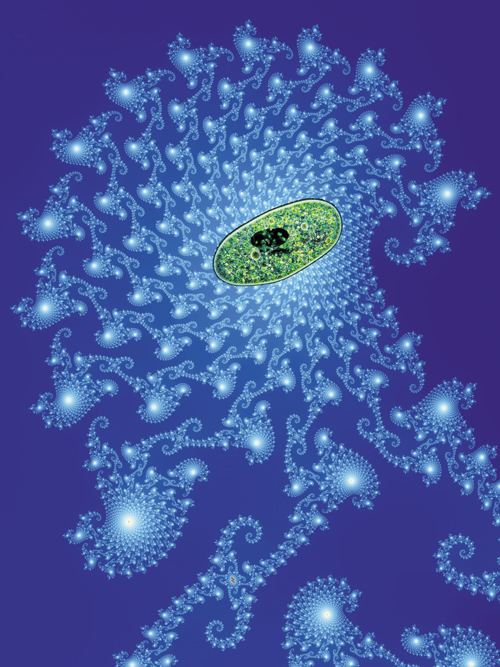 The infinitely entangled structure of natural machines also founds their indestructibility. Birth and death emerge as mere developments and envelopments of a vast living machinery which, while imperceptible to us, radiate throughout the universe and are preserved for all eternity. In a passage which may provide us with some solace, Leibniz elaborated that “A natural machine can never be absolutely destroyed just as it can never absolutely begin, but it only decreases or increases, enfolds or unfolds, always preserving in itself some degree of life [vitalitas] or, if you prefer, some degree of primitive activity [actuositas]” (On Body and Force, Against the Cartesians, 1702).

Crucially, Leibniz’s theory of organism provides us with an insight into the kind of paradoxical infinity which drove much of his thought process, and which he deployed throughout his system. From his linguistic investigations to his history of the Earth, infinity for Leibniz is never abstract or quantitative, but thoroughly embodied, continuous, and infinitely nested (except in his mathematical investigations, where he intentionally adopts a fictitious reading of infinity for practical purposes). In its incarnation in this way, infinity cannot be disassociated from some kind of unity. As Leibniz himself often conceded, “My meditations turn on two things, namely unity and infinity.” Indeed, within divinely-inspired reality, the connection between infinity and unity was not one of simple dichotomy, but of interdependence and variety. Indeed, even so-called ‘finite’ human creatures were infinite in their own way.

Leibniz’s theory of organism is also emblematic of his broader modus operandi, which involved shunning radical distinctions in favour of subtle variations. Far from rejecting mechanism out of hand, Leibniz co-opted it, reworking it to suit his own purposes. For him, organism referred to an organizational principle rather than a particularily biological sort of stuff: “Organism, that is to say order and artifice, is something essential to matter, produced and arranged by the sovereign wisdom.” (Leibniz, Philosophical Letters, vol III, ed C.I. Gerhardt, p.340). Living beings were thus subjected to a particular variety of mechanism, which unfolded infinitely and dynamically. Ultimately, in the “infinite subtlety of their artifice,” natural machines were borne out of divine wisdom, which itself was separated from us by an “immense distance” (New System of Nature).

Leibniz’s understanding of organism would be echoed many years later by the physicist Erwin Schrödinger in the final section of his famous 1944 essay, What is Life?, which addressed ‘The Relation between Clockwork and Organism’:

“It needs no poetic imagination but only clear and sober scientific reflection to recognize that we are here obviously faced with events whose regular and lawful unfolding is guided by a ‘mechanism’… producing events which are a paragon of orderliness. Whether we find it astonishing or whether we find it quite plausible that a small but highly organized group of atoms be capable of acting in this manner, the situation is unprecedented; it is unknown anywhere else except in living matter.”

Audrey Borowski graduated from Oxford and is doing a PhD in the History of Ideas. She’s interested in the history of linguistic thought.

Leibniz and the Science of Happiness