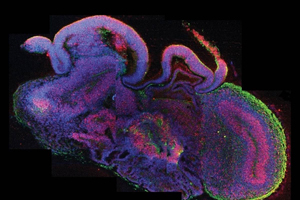 Four years ago scientists first developed a method of growing stem cells into miniature versions of human brains called brain organoids. These ‘mini brains’, until now grown in the lab, have many of the same characteristics as living human brains at an early developmental stage. Their structural similarity and the fact that they react in a similar way to stimuli such as drugs means that they are extremely useful for research into (for instance) Alzheimer’s Disease, since opportunities for empirical studies of living, fully-developed, human brains are obviously very restricted for ethical reasons. A new development has now given rise to moral reservations concerning organoids. Two teams of scientists have experimented with inserting these mini brains into the brains of rodents. The team of Professor Fred ‘Rusty’ Gage at the Salk Institute in California has successfully implanted human brain organoids into mature mouse brains, where they survived for up to two months. Meanwhile Dr Isaac Chen and his researchers at the University of Pennsylvania have implanted human organoids into the secondary visual cortices of eleven mature rats. The mini brains, which measured 2 mm across, again survived for around two months and formed numerous axons linking themselves to the rat brains, some up to 1.5 mm long. Cells in the organoids showed activity when the scientists shone light into the rats’ eyes, suggesting that the mini brains became functional within the rats brains. Both teams reported their work at a Society for Neuroscience meeting in Washington, DC in November. One moral concern is that the human cerebral organoids could grow in size and complexity within lab animals, to the point where we need to seriously talk about mini-brain consciousness.

At a recent session of the Council on Foreign Relations on the future of Artificial Intelligence, the author, inventor and futurist Ray Kurzweil predicted that “medical robots will go inside our brains and connect our neo-cortex to the smart cloud” by the year 2029. This prediction is part of Kurzweil’s conviction, shared by other experts in the field, that no part of our lives will remain unaffected by AI. Kurzweil is the main prophet of the Singularity – the idea that self-improving artificial intelligence will create a situation within the next few decades in which exponentially accelerating technological change becomes almost too fast to comprehend. Rather than AI endangering human survival as Stephen Hawking recently warned, Kurzweil envisages a merger of humans and AI: “My view is not that AI is going to displace us. It’s going to enhance us. It does already.”

Is gut feeling a good guide to moral evaluation and decision-making? A new study compared the effect of relying on intuition rather than deliberation on the resulting moral outcomes. Research psychologists Sarah Ward and Laura King of the University of Missouri presented study participants with a series of scenarios and in each case asked them to judge whether the action described was wrong. The researchers found that people who mostly relied on their moral intuitions tended to make harsher moral judgements and be less likely to reconsider their views, even if the behaviour under consideration caused no actual harm to anybody. Then they investigated whether asking people to reason about the scenarios at greater length would reduce the individual differences in the judgments they made. Ward explains: “We consistently found that people who are more prone to rely on intuition condemned these actions …and what we found is that after people deliberated, in general they did condemn these actions less, but people who strongly relied on their intuitive instincts condemned these actions more harshly than others.”

In Germany the Federal Constitutional Court decided in November that in future it will be possible for new parents to officially register the sex of their baby (and for individuals to register their own sex) as either “female”, “male” or… “X”. A further legal option will be to omit an entry concerning sex from the birth registration form altogether. This decision reflects the view of the German constitutional judges that persons who consistently do not feel themselves as belonging to either gender should not be disadvantaged in their fundamental rights. Austria is also considering the question and is due to announce its decision in 2018.

Marxist philosopher István Mészáros died on 1 October 2017 aged 86. In Budapest, the young Mészáros was a student of Georg Lukács and an opponent of Stalinism. After the end of the Hungarian Uprising in 1956, Mészáros fled his home country and subsequently accepted lectureships at universities in Italy, Canada and the UK. He was professor of philosophy at the University of Sussex for 15 years. In his influential work Marx’ Theory of Alienation (1970) he argued that distinguishing between an earlier and a later Marx was a mistake. After the collapse of the Soviet bloc, Mészáros believed capitalism could still be overcome and his book Beyond Marx (1995) made an important contribution to the discussion of the future of socialism.

Will Robots Need Their Own Ethics?