Santa Claus & the Problem of Evil

Jimmy Alfonso Licon engages in a little Santodicy for Christmas.

There are many profound philosophical issues involving Santa. For example, we might wonder how we know that Santa doesn’t exist. That is, although it seems obvious that there is no Santa, the reasons usually given for this disbelief are less sound than is often appreciated. In this article I want to explore an argument against Santa that shares a number of features with the problem of evil that has long troubled theologians. This argument against Santa is one way we can know that he doesn’t exist, but without the same vulnerabilities that the usual reasons have.

First let’s survey some of the usual reasons people give for thinking that there is no Santa.

Some say that disproving the Santa belief is a simple matter of visiting the North Pole and looking for him. There would be no Santa to be found. However, it could be that Santa’s workshop is disguised to avoid detection, even by the most sophisticated methods; after all, Santa is supposedly capable of doing all sorts of other extraordinary things. So, even if Santa resided there, he might not be easily detected.

Others say that it would be impossible for Santa to deliver gifts to children around the globe within the space of a single night. This is only a difficulty if we think that Santa is an ordinary human. But that can’t be right. Santa cannot be merely human; after all, he relies on flying reindeer for transportation! If Santa had extraordinary powers, then he might be able deliver gifts, the world over, in such a short time. We might for example suppose that Santa has the ability to slow down time.

Other people might object that clearly, guardians and family members provide the gifts come Christmas time. Unfortunately, while they’re often responsible for buying the gifts, this is insufficient to prove that all gifts come from them. However, the claim is not that Santa is the only source of gifts at Christmas. Rather, Santa is only supposed to be the source of some gifts.

The Problem of Evil

Philosophers right back to Epicurus (341-270 BC) have grappled with the problem of whether it’s possible to reconcile the existence of widespread and horrendous evil (plagues, torture, genocide…) with the existence of an all-powerful, perfectly benevolent God.

Atheists hold that needless suffering is good reason to doubt that there is an all-powerful, perfectly good God. But theists have a number of responses to the problem of evil. Some argue that suffering is the product of people exercising their free will; after all, if humans have the ability to choose between good and evil actions, then some of them will choose to do evil. And because the ability to choose, even if the choice is evil, is supremely valuable, God must not interfere; if He did, then it would undermine the value of freely making good choices. For example, we think that people who are compelled to do the right thing are not morally praiseworthy; they are only praiseworthy if they could have chosen to do evil, but chose the good instead.

The main thrust of the problem involves there being many instances of suffering that don’t seem to do a bit of good for anyone. The philosopher William Rowe famously gave this example: “Suppose that in a forest somewhere, there is a fawn that has been struck by lightning. She lies on the forest floor for a couple of days in agony, until death relieves her suffering” (‘The Problem of Evil and Some Varieties of Atheism’. American Philosophical Quarterly 16 (4), 1979). If there is a perfectly good God, then it would be in His nature to prevent needless suffering; and if He is all-powerful, then He would be able to prevent it. So why doesn’t He?

Santa and the Problem of Moral Desert

We should start with the essential nature of Santa; that is, the properties that an individual must have if they are to qualify as Santa. One plausible essential property of Santa is that he distributes gifts on the basis of moral desert. When philosophers use the term ‘moral desert’, they mean what people deserve based on their actions. For example, it is plausible that someone who robs a bank deserves to be punished: there is a sense in which they’ve earned their punishment. So it is also plausible to suppose that an essential property of Santa is that he rewards good children with gifts, but doesn’t so reward naughty children. There’s some evidence for this suggestion in popular culture, for example, in the lyrics from the song ‘Santa Claus is Coming to Town’:

He knows if you’ve been bad or good, so be good for goodness sake.’

So Santa is essentially someone who delivers gifts to children based on whether they deserve them. Thus we should expect that the distribution of gifts come Christmas morning would respect the moral desert of the recipient if there were a Santa. Suppose then that only bad children received gifts. This unfair pattern of gift distribution would then itself be good reason to suppose that there was no Santa.

However, there’s a catch. If you recall, I said that part of our conception of Santa is that he’s responsible only for some of the gifts that children receive. Children on the naughty list don’t receive gifts from him; and yet many of them receive gifts anyway. So, with respect to the distribution of gifts among children, there is a confounding factor: parents who give their give their children gifts even if they are naughty.

To correct for this factor, we have to focus on whether there are good children who don’t receive any gifts whatsoever. That is, we would predict that if Santa exists, then good children would at least receive gifts from him. But instead we find that there are millions of good children around the world who receive nothing.

A. If there is a Santa, then all deserving children would receive something for Christmas.

B. But there are plenty of deserving children who receive nothing for Christmas. So,

C. There is no such person as Santa.

So the pattern of distribution of gifts among good children is a serious evidential challenge to Santa’s existential status.

Problems with the Problem

Someone might respond that around the holiday season it is common to find in a shopping mall a Santa asking children what they want for Christmas, without regard for whether they have been bad or good. This could imply that delivering gifts to children because they’re children might instead be central to our conception of Santa. If so, this would be a difficulty for the argument against Santa from moral desert. If part of our conception of Santa is that he delivers gifts indiscriminately, then the fact that Santa doesn’t appear to be responsive to moral desert does not count against the existence of Santa. 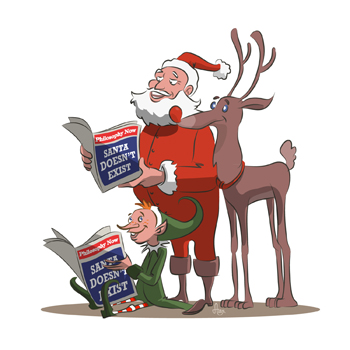 However, another feature of our shared conception of Santa is that, just as in the mall case, he indiscriminately inquires of every child what they want for Christmas. Santa is fair to every child that he meets, in that he gives them each a chance to feel that they’ve been heard, and perhaps it is also an opportunity to remind them that they should be good if they are to expect any gifts from him. But notice that asking children what they want, and actually delivering it, are very different.

Perhaps someone else might object that there’s so much about Santa that we don’t understand, and he might have compelling reasons for not delivering gifts to some good children. That is, although he usually delivers gifts to good children, there are other mitigating reasons that might override him doing so; however, because Santa is so mysterious, we would be unable to comprehend those reasons (some theists say similar things about God in response to the problem of evil).

There are a couple of problems with this objection.

First, while aspects of our modern conception of Santa allow that he is mysterious and magical, this doesn’t seem relevant to evaluating the problem of moral desert.

That problem is comprised of two components:

(1) The prediction we would make if Santa were real as to the pattern of Christmas gift distribution among good children based on Santa’s desert-respecting nature.

(2) The empirical evidence from our everyday experience that such a prediction is false.

The appeal to mystery and magic, even if correct, shouldn’t do much to shake our confidence in either (1) or (2).

Second, if the appeal to mystery and magic were compelling enough to overcome our evidence for (1) and (2), then it would also be compelling enough to defeat nearly any claim we could make about Santa. That is, if he is so mysterious that his reasons are beyond comprehension, then nearly all Santa-talk would be unfounded: in other words, if we don’t understand Santa’s motivations at all, then it’s difficult to say anything about him without the possibility that it be contradicted by something we don’t know. But we seem to say all kinds of things about Santa. So there isn’t much reason to take this kind of objection seriously.

In conclusion, although there are a number of reasons people give for how they know there is no Santa, many of these reasons are not as convincing as they first appear. However, if we put the issue in terms similar to the problem of evil, then there is a more fruitful way to think about how we can know that there is no Santa. Hopefully, this exercise is also a reminder that issues which we think are mundane or obvious, are often less so upon closer examination.

Jimmy Alfonso Licon is a philosophy doctoral student at the University of Maryland, College Park. He works primarily in epistemology, metaethics, and Santology.

• Thanks to Glen Licon (my brother) for helpful feedback on an earlier draft.