The Sheep & The Dogs

Anushka: Being a teenager is definitely hard work. Teens are stressed-out people trying desperately to improve themselves and the world they live in. Or perhaps that’s just me. In any case, teenagers have their own busy loads to attend to. Many adolescents across the world have workloads that rival those of professionals in the corporate world.

Zac: So where does philosophy fit into our busy lives? Well, Anushka and I, in the moments of relaxation that interrupt our workloads, use philosophy to make sense of the crazy adult world that so many of us often feel unequipped to enter.

Anushka: We want to start by discussing something we find particularly pertinent in the life of many teens, including ourselves.

Zac: The world around us is constantly trying to mold us – whether by way of the advertisements we’re shown, the social media tailored to us, the way our friends act, and so on.

Anushka: Social media is a means by which people of all backgrounds are meant to share their unique ideas, but often it’s a platform where unique personalities begin to mesh into something more homogenous.

Zac: So the question is this. In a world that constantly markets the appeal of ‘fitting in’, how can the modern teenager keep his or her individualism?

Anushka: Human beings are social creatures. But how social is too social? How can we resist our culture stunting the growth of our unique characters?

Zac: The point here is not necessarily to make fun of people who want to keep up with the trends. I believe the problem lies in the fact that some teens – and others – think keeping up with the latest trends and ideas will guarantee them some status among the herd. But as much as I’d like to, Anushka and I have elected not to give an inspirational talk regarding the importance of ‘being yourself” and will, instead, shed light on the philosophy of Diogenes.

Anushka: Diogenes the Cynic was a Greek philosopher of the fourth century BC who advocated for the importance of radical individualism.

Zac: He argued for the disregarding of social norms, and suggested we should enjoy nature, seek happiness in the present moment, and ignore social pressure. For this reason, people called him a ‘Cynic’, from the Greek for ‘dog’.

Anushka: The Buddha talked about the exact same thing: keep the company of dogs, he said, because they will teach you how to live your happiest life, by rejecting the need for social conformity and ‘normal’ behaviour. Evidently, great philosophical minds from all parts of the world think alike. But what do dogs have to do with the importance of individualism? Well, let’s consider the other option: living like a sheep.

Zac: We’re not trying to create a generation of contrarians, but we do feel it’s important to recognize sheepy behavior in oneself, which many of us participate in, likely without even realizing it. Living like a sheep means conformity, and it lacks the carefree happiness characteristic of a dog’s life. While someone who lives like a dog is constantly exploring their passions and the world around them, the sheep are bogged down by the pressures of society, and struggle to fit into a mold that will add nothing to their quality of life and long-term happiness.

Anushka: It’s not a good balance working to fit in and keep up with the lifestyles of those around us. It leads to a Sisyphean struggle to constantly seek out possessions and superficial luxuries. Upon obtaining these coveted things, happiness is artificially stimulated temporarily; but when that feeling leaves, the person is left feeling empty and wanting more. Commonly, people use this argument when speaking against materialism and greed. But in our view, it’s not greed for greed’s sake that drives this constant cycle of want – it’s the desire to fit in with the rest of the herd. Baaaad. 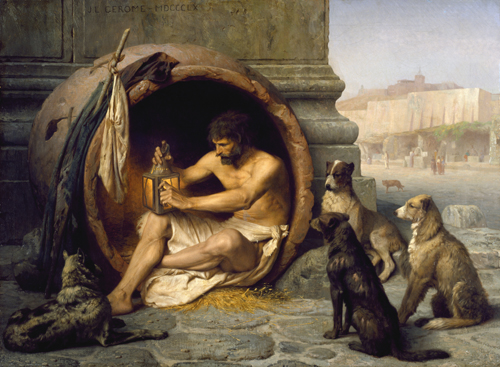 Diogenes in his barrel home

Zac: Diogenes, the ultimate autonomous man, lived a life devoid of non-essentials. He resolved to live without worldly possessions, and instead enjoy nature’s gifts. His philosophy was to avoid the pain induced by the frustration, exhaustion and jealousy that came from living the life of a sheep, thus putting oneself through deliberate suffering. He claimed that refusing to give in to social norms would lead to constant satisfaction through a lifestyle of simplicity. We’re not trying to tell you to abandon your Instagram or never update your iPhone, but hear us out. Diogenes recalled that once his mind was stripped of social constructions, the simple prospects of life, such as a calm rest after a long day, brought him total satisfaction. People generally give in to social norms so as to be accepted by others. Diogenes believed that once one realizes the irrelevance of these social norms, one will also realize the irrelevance of public acceptance.

Anushka: We see Diogenes’ philosophy as empowering and inspiring. Buddhist philosophy preaches many of the same things, and it’s interesting to recognize the similarity between East and West. In our own lives as teenagers, public acceptance and conformity seem to make a lot of sense. After all, who doesn’t want to feel accepted in the eyes of their friends, family and peers? Yet perhaps the best way to achieve happiness is to renounce acceptance all together. When you renounce public acceptance, you can then focus on more important things, like the content of your personality, your values, and enjoying your passions and interests without fear. Let acceptance come as it may, and in the meantime, focus on being your best self. Don’t worry about buying the latest branded clothing, start your own clothing line! Or if branded clothing is your thing, do it because fashion makes you happy, not because those around you all have the same brand. Social norms shouldn’t be on the list of things that gets you down. Don’t be sheepish. ;)

What Philosophy Does To Philosophers