Why Is There A World?

Carlo Filice wonders why a god would bother to create a world.

Why is there a world? Even if this reality is mere appearance, dream, maya, it would still be something. There could have been nothing, as Leibniz famously observed. So, why this? And why one with conscious beings in it?

We don’t have agreed-upon answers to this question. The responses that have been proposed range from questioning the question, to a scientific brute-fact answer (“It just is”), to religious and otherwise supernatural half-answers, or non-answers.

Perhaps somethingness is the default natural state, hence not needing to be explained. However, how could we know that, since it seems to us that, on the face of things, nothingness is just as likely?

Science cannot give us such ultimate answers. A Big Bang presupposes something already, albeit in a compact energy state. In other words, quantum fields might be able to generate worlds, but their initial presence is itself in need of explanation: why such fields, and not nothing? Or worlds might indeed be fluctuating between form and energy in series of Big Bangs and Big Crunches with no beginning or end. We can’t rule this out. But this option also leaves us baffled: why do we have an everlasting cycle of somethings as opposed to complete nothingness?

In a sense, only one type of answer might suffice, and it’s an old one, deriving from St Thomas Aquinas in the Thirteenth Century: what exists contingently must derive from something that exists of necessity – a God. But religious answers positing a God who precedes the world, temporally or logically, only postpone the answer. Why is there a God in the first place, not nothing? Perhaps a God can be explained as necessary; but most of us remain unpersuaded. And even if we could prove that a necessary God exists, this would not tell us why even a necessary God would make a world. Why would a necessarily existing (and putatively perfect) being produce a world? We might therefore be condemned not to have ultimate answers.

What about penultimate answers? Would accepting some (unexplained) God help to explain why there is this world? There is reason to be more hopeful here.

This leads to the question I want to ask, and try to answer. If we were to presume a divine being, a super-powerful mind, how would it help to explain this world? Why would such a being produce a world? 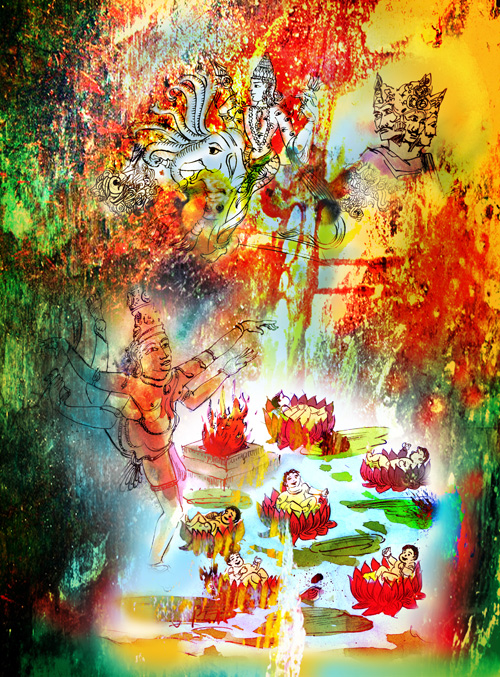 We might be able to provide a plausible answer to this question if we presuppose that some things have value intrinsically and objectively. This answer would be appealing not only to monotheists, but also to Platonists, Leibnizians, and Process Philosophers. Hindu metaphysicians would also like it. As a free thinker with theistic leanings, I find it attractive.

First, some words about other options. Some have denied the meaningfulness of the very question ‘Why is there a world?’ They might say that asking this question is similar to asking, ‘Where is the whole universe?’ Just as the latter is nonsensical, perhaps so is the former.

I don’t see the two questions as analogous. Locations in space or even spacetime only apply to objects within this universe, and cannot apply to the universe as a whole. However, questions of reasons or purposes could apply both within and without spacetime parameters.

There may by other reasons why the question ‘Why is there a world?’ is incoherent. But the fact that the question remains alive (see for example Jim Holt’s recent stimulating book, Why Does The World Exist?) testifies otherwise.

The current scientific mindset leans heavily toward the study of matter, and is generally dismissive of non-physical explanations such as divine sources or non-material minds. Perhaps we are mere accidental (or even inevitable – if one accepts the infinite worlds that the multiverse might yield) by-products of larger physical processes. Even so, materialism does not preclude us from asking, “Why any physical processes at all, as opposed to nothing?”

So, back to our current formulation of this question: Given a God, why is the world as we know it here? Why would a divine source produce a world (or many worlds) at all? This is a particularly difficult question for those who conceive of God as a fully blissful and self-sufficient being, which is a typical theological conception of God. What would motivate such a self-satisfied super-mind to imagine from nothing a world not-itself, and realize it? Why not simply rest forever or timelessly in its blissful self-state?

It’s remarkable that the foundational texts of the major religions have little to say about this. The Book of Genesis simply begins with God’s process of creation, no motivation offered. The only hint as to motive occurs post-Creation, when God observes the various elements created and recognizes their goodness (“And behold it was good…” is written several times in the first chapter). Perhaps such goodness is itself the reason for the Creation; or perhaps not, and such goodness was a surprising byproduct of the Creation. More would have to be said.

The foundational texts of Hinduism, Buddhism, and Daoism are likewise unhelpful. Buddhism generally refuses to speculate in these areas. The last two systems may not even posit a conscious mind behind the universe. The Hindu Upanishads promote a view of the world as emerging from a divine self-transformation. One god, Brahman, becomes the many-ness of worlds and individuals. This tells us that the world is an aspect or the multifaceted appearance of a divine being; but it does not tell us why this god takes the form of worlds.

However, the eighth century Hindu theologian Shankara suggests that it happens out of a sense of sport or playfulness, on the analogy that even self-sufficient princes opt for sport just for the fun of it. While this suggestion – the world exists for sheer fun – is worth developing, it itself seems insufficiently explanatory. For instance, what makes many-ness, as opposed to some form of undifferentiated being, fun?

Let’s use the God-becoming-worlds analogy to consider this idea. Let’s imagine this divine mind in its natural state as blissful, and, at first, content-free. Nothing else is there. As a mind, it would eventually (or perhaps immediately) imagine possibilities. It would imagine virtual (that is, purely imagined) worlds. It would imagine individualized beings in such virtual worlds. For the sheer entertainment value, it would endow such characters with freedoms. It would also eventually (or perhaps immediately) realize that observing such a world is not as much fun as participating in the thrills, drama, and life of its characters from the inside. Maximal fun would require God forgetting itself (in part?) and playing at being these imagined characters in this imagined world. Through the subjective life of such characters, God’s reality would thus be enriched by new sources of fun. God-plus-worlds is greater fun than God alone.

Therefore, the seeming splintering of ‘being’ into many and varied conscious entities is understandable merely on the basis of hedonistic reasoning. Even if it’s a temporary illusion, the sense of individuality and separateness makes possible a wide range of intrinsically good feelings, sensations, and emotions. Moreover, the need for thrill, drama, and zest might require that these individuals see their lives as precarious and finite, as well as subject to pain and loss. But with pain and loss, we come up against the substantial problem that living is not all fun.

Here we can provide philosophical help, and say that a self-sufficient and blissful God would generate worlds that would at least appear to be outside of itself, because such worlds add to the overall value of its being, or of reality overall, in ways other than through fun. We can for instance see how a divine motive of mere entertainment eventually (or maybe immediately) generates moral dimensions. Here is one way. If the created beings have an inner life, and can be hurt, then they each acquire intrinsic worth. A God would realize this, and would be morally obliged to treat them with care. Perhaps, for instance, it would need to grant them multiple lives to equalize their opportunities. Additionally, part of the task of the characters in this world is for them to also recognize the intrinsic value of others as conscious and feeling beings (whether human or not). They could then choose to act accordingly (or not). Moral virtue becomes possible, and this achievement would introduce a new form of intrinsic worth beyond mere fun: moral worth. The game of life as we know would take off.

So, the splintering of one being into many conscious beings with varied experiences and attributes, including moral virtue, would add intrinsic value to any reality. A world that houses such individuals is a world of considerable intrinsic value. Hence, this world may ultimately be here because its value enriches a divine reality: “Behold, it is very good.” So given a creative God, and given the value of subjective lives, this world becomes understandable, in a penultimate way.

This argument only presupposes a God with an imagination and the intrinsic value of conscious experience. I dare say that many current philosophers recognize that conscious experience is a source of intrinsic value. It is widely granted that a zombie world would lose most/all of its value. It is also widely granted that if animals are conscious beings, then we need to treat them with care. The God assumption, of course, remains controversial.

Carlo Filice is Professor of Philosophy at SUNY Geneseo and author of The Purpose of Life: An Eastern Philosophical Vision (UPA, 2011).

The Big Questions: God & God: All That Matters both by Mark Vernon

Is God Coming or Going?

On being a philosopher and a Christian