Martin Jenkins considers the way of the samurai.

It is a paradox of early modern Japanese history that this highly militarised society only once attempted a foreign war – the invasions of Korea in the 1590s. The samurai mostly fought each other in civil wars, until the battle of Sekigahara in 1600 led to the establishment of Tokugawa Ieyasu as shogun (regent/dictator). Tokugawa created a peaceful regime which lasted until 1868. In doing so he also created a period of ethical reflection: what was the role of a warrior elite in a society which had effectively abolished war?

Arguably the greatest ethical text to emerge from this period was Hagakure, the work of a once obscure samurai named Yamamoto Tsunetomo.

The Forging of a Warrior Philosopher

He was born in 1659 on Kyushu, the southernmost of the Japanese islands, as far as possible in Japan from the capital Edo and the shogun. Tsunetomo’s father, Yamamoto Jin’emon, who was seventy when his son was born, was a loyal retainer of Nabeshima Katsushige, the daimyo or local feudal lord. Katsushige’s father, Nabeshima Naoshige, played a prominent part in the Korean expedition but had a difficult relationship with Tokugawa in the turmoil that followed, originally backing him but switching sides at the last minute. Katsushige had died two years before Tsunetomo’s birth and been succeeded as daimyo by his grandson Nabeshima Mitsushige.

Young Tsunetomo was regarded as sickly and not likely to live long (but he made sixty, which at that time would be regarded as pretty good going). The boy received the usual samurai training as he grew, which included swordsmanship, calligraphy, and poetry composition. Two examples of his calligraphy survive; the translator describes them as having “a vigorousness befitting a warrior.”

Following his father into service with the Nabeshima clan, Yamamoto’s first official position was as a page to Mitsushige. By the age of twenty he despaired of finding a suitable position as a retainer. He was told that he looked ‘too intelligent’, and so devoted a year to learning to look less so. About this time he encountered the Zen Buddhist priest Tannen, a man of outstanding integrity who greatly influenced the young samurai.

Through the efforts of his nephew, who was in fact older than he was, Yamamoto eventually secured a position as a scribe in the capital. However there was a disastrous fire for which the nephew took responsibility and so resigned, and Yamamoto lost his position in the wake of the resignation.

Back in the Nabeshima domain, Yamamoto secured what amounted to a job as the daimyo’s librarian. Unlike mediaeval Europe, Japan never developed a separate clerical class. The samurai fulfilled both military and administrative roles.

In 1700 Mitsushige died. Steeped in samurai traditions, Yamamoto wished to commit seppuku (ritual suicide) in solidarity with his lord, but was prevented by a final edict from Mitsushige explicitly forbidding this. Instead he chose to become a Buddhist priest; his wife joined him as a nun. As a priest he took the personal name Jocho, and so sometimes appears as Yamamoto Jocho. He withdrew to a hermitage in the woods. This gives its name to his work – Hagakure means ‘Hidden Among the Leaves’.

He did not actually write the work. Another unemployed samurai called Tsuramoto became his disciple and took notes of his teachings, which he eventually worked up into the book we have today. This is set out in eleven chapters, the last of which has the delightful title ‘Events Not Related in the Other Ten Chapters’.

As that chapter title suggests, Hagakure is not a highly structured treatise. It mixes Yamamoto’s own reflections with anecdotes recalled from his feudal lords and others. Its central message is concerned with how a samurai should behave in the new social order, but in many ways it looks back to the period of the civil wars.

The samurai is first and foremost a warrior; but he has to conduct himself in a peaceful society. Yamamoto does not distinguish between ethics and etiquette as Western philosophy tends to. Thus, a thoughtful reflection on the issue of advising another person concerning their faults is closely followed by advice on avoiding yawning in public. He stresses the importance of outward grooming as evidence of inner resolve: “if you are slain with an unseemly appearance, you will show your lack of previous resolve, will be despised by your enemy, and will appear unclean.”

His best known observation appears in the opening chapter (from which most of my quotations are taken):

“The Way of the Samurai is found in death. When it comes to either/or, there is only the quick choice of death.”

Yamamoto is not arguing that the samurai should seek death. Rather, he is challenging the idea that preserving one’s own life is the supreme good. He argues that overcoming the fear of death is not only liberating but enables the individual to achieve clarity of purpose.

We can understand this idea in the context of a sword fight. The aim is to defeat the enemy, and in order to fulfil that aim it makes sense to defend oneself; but if one is obsessed above all with ensuring one’s own survival, this detracts from fulfilling the aim. The samurai’s duty is victory, not survival, and if his death will better serve the interests of his lord, he should choose death.

The word samurai comes from a verb meaning ‘to serve’, and Yamamoto puts great emphasis on the service and duty owed by the samurai to his lord. In fact, he writes, “Every morning one should first do reverence to his master and parents and then to his patron deities and guardian Buddhas.” In many ways this is shocking to Japanese tradition: to place the master before the gods might be called blasphemous. It is worth recalling in this context that one of the great issues facing Japanese society in the seventeenth century was what to do with the ronin or masterless samurai. (The Seven Samurai in the film of that name were actually seven ronin.) Yamamoto has an interesting comment here: “People at the time of Lord Katsushige used to say, ‘If one has not been a ronin at least seven times, he will not be a true retainer. Seven times down, eight times up’.” The idea is that only the man who knows what it is like to be without the security of serving a daimyo can properly fulfil the duty of service.

The duty of revenge is an important element in Yamamoto’s ethics. He recommends undertaking it promptly, by “simply forcing one’s way into a place and being cut down.” It does not matter that you will be killed: the important thing is that you have made the attempt. On this basis Yamamoto criticises the famous Forty-Seven Ronin for delaying and planning a (successful) revenge of their slain lord: “When the time comes, there is no moment for reasoning” he says: “The Way of the Samurai should be in being aware that you do not know what is going to happen next.” Spontaneity is central to the samurai creed: to be is to do.

Yamamoto may so far appear to be rigid and demanding of a strict code of duty, but he also displays considerable sympathy for his fellow men (women may have been another matter): “What is called generosity is really compassion. In the Shin’ei it is written, ‘Seen from the eye of compassion, there is no-one to be disliked. One who has sinned is to be pitied all the more.’” In writing about the upbringing of samurai children, he emphasises that they should be taught to avoid fear, but then adds, “A child will become timid if he is scolded severely.”

The Zen idea of detachment permeates Yamamoto’s thinking. Acceptance of death implies detachment from one’s own life. However, detachment does not exclude compassion and sympathy for one’s fellow beings. Yamamoto clearly felt an intense loyalty to his feudal lord, to the point of it overcoming his feelings towards himself. His philosophy is a philosophy of service. 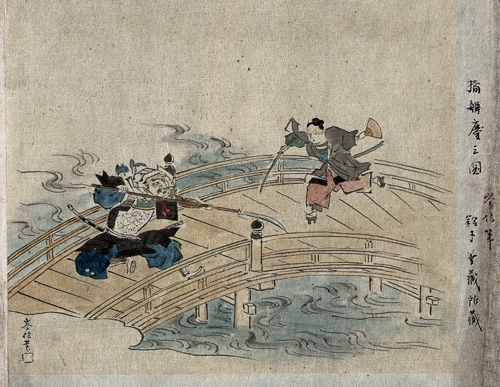 Samurai fighting on a bridge © Wellcome Collection. cc by 4.0

Hagakure more or less disappeared from view following Yamamoto’s death in 1719. Manuscript copies were retained and studied by the Nabeshima clan in Saga Han, but the work was not published. No doubt the emphasis on loyalty to one’s immediate lord would not have gone down well with the centralising government of the shogunate.

The work came to public knowledge following the Meiji Restoration in 1868, and was published in the early twentieth century, towards the end of the Meiji period. In the 1930s it was reinterpreted: loyalty to the daimyo was replaced by loyalty to the emperor. It became a standard text in the thoroughly militarised society of mid-twentieth century Japan. Kamikaze pilots often went into action wearing headbands which bore slogans from Hagakure.

After the defeat of Japan and the American occupation, Hagakure was a text to be avoided. It was seen as promoting the values which had led Japan to start the Pacific War. However, Hiroaka Kimitake, who reinvented himself as the novelist Mishima Yukio, realised that it had something to say to post-war Japan too. The context was very similar to that of the original, as Japan had adopted a constitution which renounced war (this did not prevent it from developing one of the strongest militaries in the world). In 1967 Mishima published a short book consisting of extracts from Hagakure and his commentary on Yamamoto’s philosophy. Whether this commentary accurately reflects Yamamoto’s ideas is another question. Personally, I believe that Mishima’s interest in death, which eventually led to his own ritual suicide, is at odds with Yamamoto. Mishima was fascinated by death; Yamamoto promoted indifference to death. When Mishima chose death it was not in an either/or situation; he brought it upon himself. Yamamoto would not have approved.

Martin Jenkins is a Quaker and a retired community worker. He lives in London and Normandy.

Are Designer Babies Our Future?

The Promise of Artificial Intelligence by Brian Cantwell Smith

Expanding the Original Position to Animals

Informing People About Their Genetic Risks

Can Eating Meat Be Justified?